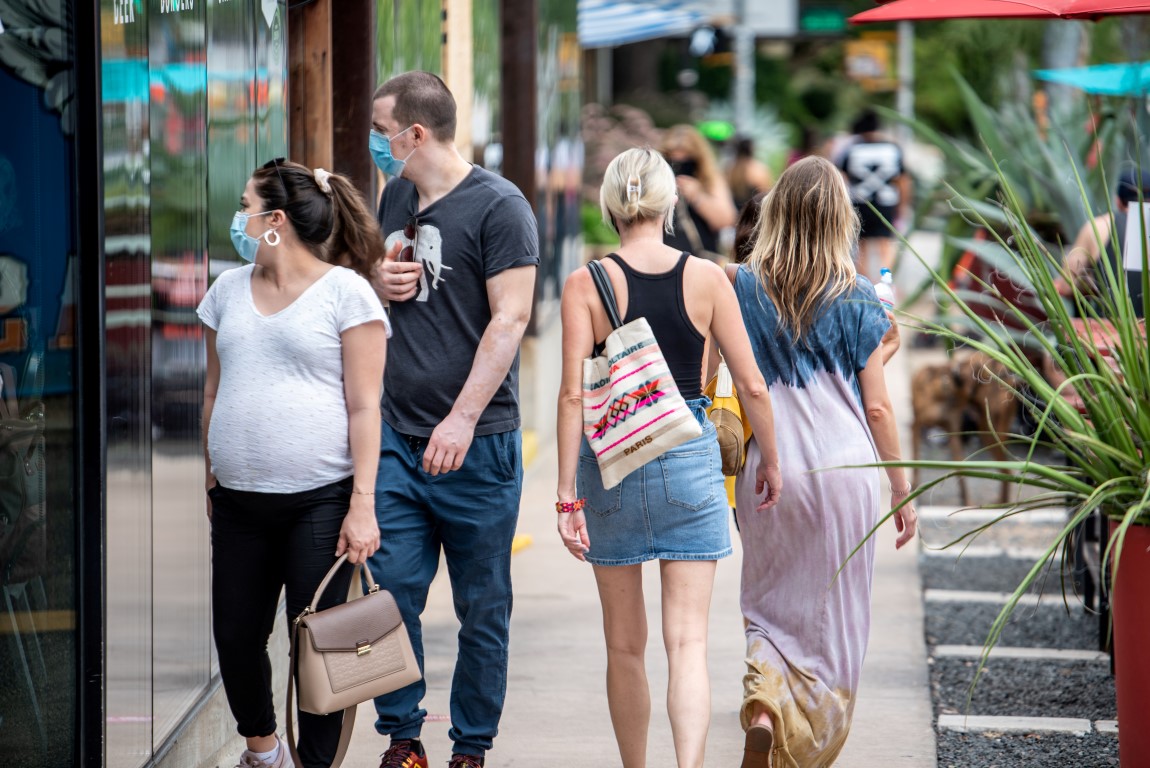 People, some with masks, on a street in Austin, Texas. Photo: Reuters
Texas Governor Greg Abbott has decreed that face masks must be worn in all counties with over 20 coronavirus cases, billing the measure as a requirement to avoid another economic shutdown.

Wearing face coverings to slow the spread of the coronavirus is unpopular among Abbott's conservative Republican base in Texas, but he said in a video released on Thursday (local time) that the action was now absolutely necessary.

"In the past few weeks, there has been a swift and substantial spike in coronavirus cases," Abbott said. "We need to refocus on slowing the spread. But this time, we want to do it without closing down Texas again."

Face masks must be used in all public buildings and outside when social distancing of at least six feet (2 meters) cannot be maintained, the governor said. Those violating the order will be given one warning. After that, they can be issued a fine of up to $US250. Nobody can be jailed for defying the order, he said.

About a third of the 254 counties in Texas have reported fewer than 20 coronavirus cases - making them exempt from the order.

The governor also gave local authorities the ability to ban outdoor gatherings of more than 10 people.

On Sunday, a far-right anti-mask rally was held on the grounds of the Texas Capitol attended by about 150 people.

After avoiding major outbreaks in April and May, Texas has become a coronavirus hotspot. It reported nearly 8,000 new infections on Thursday.

The rate of people testing positive for the virus has gone from 4.5% in late May to 14%, Abbott said. Hospitalizations averaged less than 1,700 per day in late May. By Thursday it was about 5,700 daily.

"These spikes are not just limited to the big cities," Abbott said. "Ninety-one counties had record high numbers (of cases) in the past three days."

Abbott's order marks a major reversal. For over two months, he ignored calls by the Democratic leaders of Texas' metropolitan areas to mandate mask wearing.

He refused to allow leaders in Houston to enforce their own face-covering mandate with penalties, undercutting their ability to slow the spread of the virus. Hospital officials in Houston have said intensive care beds there are now in short supply.

Abbott said he is not issuing a stay-at-home order, but is asking people to remain home if at all possible.

"We must do more to slow the spread without locking Texas back down," Abbott said. "We are now at a point where the virus is spreading so fast, there is little margin for error."