Winter Games kick off with a glitch and goodwill 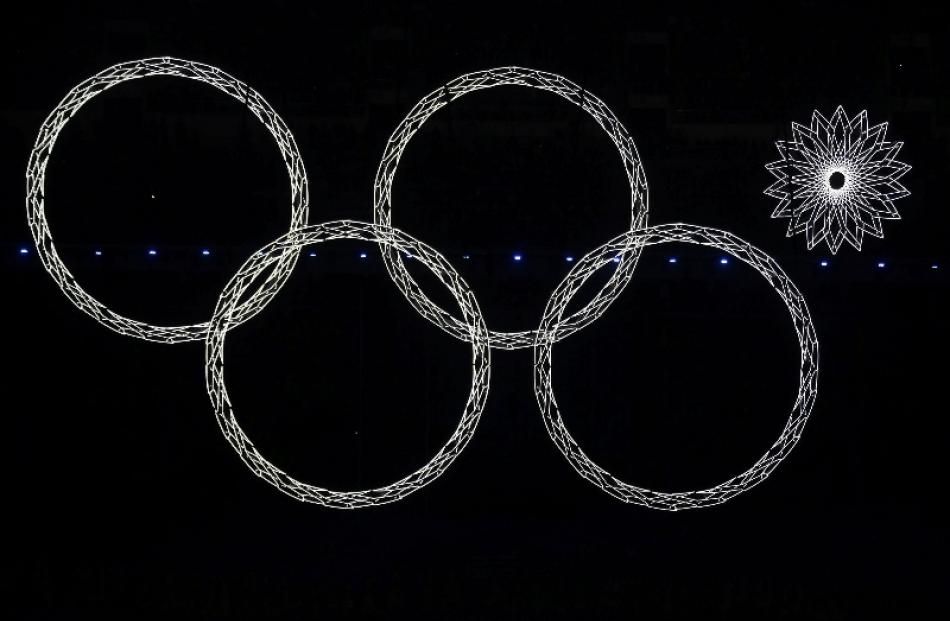 Four out of five Olympic rings are seen lit up during the opening ceremony of the Sochi 2014 Winter Olympics. Photo by Reuters

Russia's Winter Games got off to a shaky start when one of the five Olympic rings failed to unfurl, but ballet dancers, stirring music and huge mechanical props tracing the host nation's history propelled the opening ceremony forward.

Only four of the five giant Olympic rings formed from snowflake-shaped structures suspended from the roof of the 40,000-capacity Fisht Stadium in Sochi, meaning the symbol could not be illuminated with fireworks as planned.

The showboat start to a Games that President Vladimir Putin hopes will burnish Russia's image on the world stage went on without further interruption, with cosmonaut Sergei Krikalev, who has spent more days in space than anyone, hoisting the Russian flag.

Putin officially opened the Feb. 7-23 Games to a burst of fireworks that lit up the clear night sky outside the gleaming new stadium located on the shores of the Black Sea.

Before the rings hiccup, a young girl in a white dress soared into the air, lifted by a harness, and sang as floating islands featuring folktale Russian landscapes drifted dreamlike across the stadium.

Cartoonish giant inflatable church domes and mascots were less well received, but the crowd saved some of its biggest cheers for the athletes as they emerged from beneath the stage.

In an innovative twist, huge satellite images of each nation taken from space were projected onto the floor as the teams entered.

The Russians, outfitted in white fur-trimmed hats and coats, drew loud applause from the audience, and light boxes on seats in the stands created a dazzling visual backdrop.

Among the most eye-catching scenes was a graceful waltz led by stars of Russian ballet as towering columns rose from the floor to set a scene echoing Leo Tolstoy's masterpiece "War and Peace".

The twirling dancers were chased away by stark red lights, jarring music and a giant train embodying the upheaval of the 1917 Russian revolution and the importance of the avant-garde art movement at around that time.

Soviet symbols rendered in a socialist realist style - including a huge hammer and sickle - took the audience through decades portrayed as a time of industrial progress; the thaw of the 1950s to present day.

Roller skaters, their costumes glowing in a darkened arena, sped across the floor, and "constellations" in the shape of winter athletes twinkled in the cavernous space above. A lightning bolt shot from an ice hockey player's stick.

In one of the final scenes, the honour of lighting the Sochi Olympic flame went jointly to triple Olympic champions Vladislav Tretyak and Irina Rodnina.

The state-of-the-art Fisht Stadium is one of several construction projects that have swelled the budget of the Winter Games to a record $50 billion.

The run-up to the Games was marred by threats from Islamist militants based in nearby Chechnya and neighbouring southern Russian regions to launch attacks, and by international criticism of Russia's new "gay propaganda" law.

Organisers have also been under fire for the huge costs involved, unfinished accommodation and amenities, and even the treatment of stray dogs in and around Sochi.

But Putin will hope the opening ceremony signals an end to the griping, as athletes, who have been largely complimentary about the facilities and organisation so far, get the chance to provide thrills and spills on ice and snow.