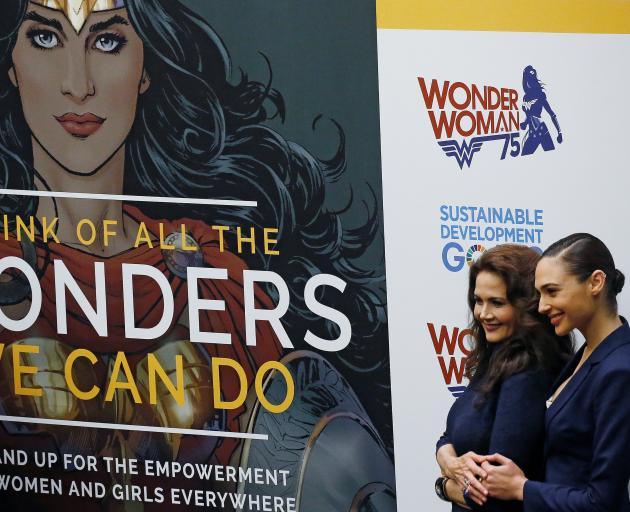 Wonder Woman will no longer be a United Nations honorary ambassador, after a short two month stint in the role. Photo: Reuters

Wonder Woman's reign as a United Nations honorary ambassador comes to an end this week, the UN said on Monday (local time), in an unexpected departure less than two months after appointment of the scantily clad, curvaceous comic book character sparked outcries of protest.

Plans had called for use of Wonder Woman in an empowerment campaign for women and girls into 2017, according to the comic book's publisher, but the character's role is ending on Friday, a UN spokesman said.

Appointment on October 21 of the comic superhero as UN honorary ambassador to fight for gender equality, especially to appeal to young people, sparked heavy criticism that the choice sent the wrong messages.

"Although the original creators may have intended Wonder Woman to represent a strong and independent 'warrior' woman with a feminist message, the reality is that the character's current iteration is that of a large breasted, white woman of impossible proportions, scantily clad in a shimmery, thigh-baring body suit," the petition read.

Dozens of UN employees protested at UN headquarters on the day of the appointment, when Diane Nelson, president of DC Entertainment, said the Wonder Woman campaign would feature various initiatives "over the course of the next year."

The UN did not provide further details as to why the Wonder Woman campaign was ending this week, but spokesman Jeffrey Brez said campaigns using fictional characters often last no longer than a few months.

The designation of Angry Birds, a collection of animated characters that originated in an online video game, as UN climate change envoys in March lasted a single day, he said.

DC Entertainment, which publishes DC Comics, said it was pleased with the exposure Wonder Woman brought to the UN's global goal to achieve gender equality and empower women and girls by 2030 "as well as elevating the global conversation around the empowerment of women and girls."

"Wonder Woman stands for peace, justice and equality, and for 75 years she has been a motivating force for many and will continue to be long after the conclusion of her UN Honorary Ambassadorship," said Courtney Simmons, a spokeswoman for DC Entertainment, a subsidiary of Warner Bros. Entertainment Inc. that is a division of Time Warner.

Release next year of a special-edition Wonder Woman comic book on the empowerment of women and girls, announced in October, is still planned, said Ms Simmons.

Nearly 45,000 felt the need to sign a petition against this superhero image ... "the character's current iteration is that of a large breasted, white woman of impossible proportions, scantily clad in a shimmery, thigh-baring body suit". What is a female superhero supposed to look like? Plain faced, out of shape, minimal breasts, clothed perhaps in a roomy grey pant-suit (or burka?), and what of that skin colour issue? Would 100 of each superhero representing 100 different ethnic variations be sufficient, or perhaps it's best to opt for a colour no race can identify with (blue, or maybe green like the Hulk - another superhero that won't make the politically correct cut because his body shape will be too intimidating ... and male).

The objectors also complained she's 'violent'. We should hope so.