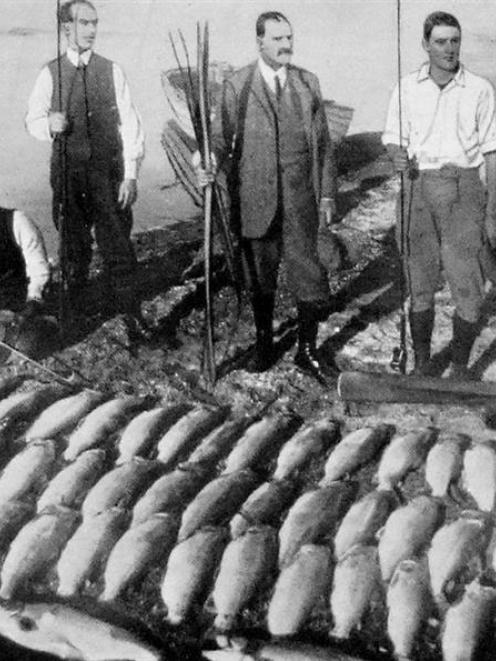 Mr Colvin White, of Monte Carlo, and his son, Peter White, of Napier, landed this catch of 51 fish, averaging 10lb, from Lake Taupo in one day. - Otago Witness, 12.3.1913
A Miscellaneous assortment of goods was disposed of at the railway clearing sale of unclaimed luggage, which was conducted yesterday by Messrs A. Moritzson and Co. There was a large number of buyers.

Portmanteaus and handbags appeared to be most in demand, and swags commanded excellent prices, but umbrellas, overcoats and hats found little favour, and were sold in many cases for a shilling each. As usual, there was an element of fun in the proceedings.

One successful purchaser, after running a heavily-laden picnic basket up to 8s, found that it contained nothing but withered fern-roots. The possessor of a sack of ''miscellaneous'' was so disgusted with his varied collection that he threw most of it on the floor. An old man, the owner of a Gladstone handbag, took his property away to a quiet corner to inspect it, and informed no-one of the result of his search. The sale went on for four hours, and the sum of 70 was realised for about 1000 lots.

• An exciting race and quite reminiscent of the dredging boom days, took place on Tuesday night (says our Lawrence correspondent). The course was between Lawrence and Waipori, and the competitors the applicant for and objectors to the 400-acre claim applied for on Waipori Flat. The hearing of the application concluded a few minutes before 11 p.m., when the warden held that on the grounds of public policy, and also on law, he could not grant the application. Immediately the court's decision was given Mr Johnson lost no time in making a start for Waipori with the object of remarking out the ground.

However, they were not daunted, and proceeded to peg out a dredging claim of 75 acres on behalf of the Jutland Flat Dredging Company, and a sluicing claim of 50 acres on their own behalf, and by a few minutes after 10am the three applications were lodged with the registrar, Mr Johnson again getting in first with a couple of minutes to spare.

• A number of Dunedin visitors who attended the garden fete at the Pleasant Valley Sanatorium went up in motor cars, and had a good run through. On the return journey last night, however, one of the cars ran out of petrol when on top of the hill leading from Waitati, and after a short deliberation, in the drenching rain, it was decided to leave the machine where it was and transfer the five passengers to the accompanying car. This meant that 10 passengers - some of them of rather bulky proportions - had to squeeze into a car which was primarily designed to carry five, but fortunately all the hills had been traversed and the vehicle managed to come on to town all right.

To add to the misfortunes of the party, however, the cover of their machine had been broken as the result of a small accident during the day, and had to be removed, and the cramped passengers were therefore left to shelter themselves from the teeming rain as best they could, meeting with poor success in their endeavours to keep out of the dripping downfall. - ODT, 13.3.1913