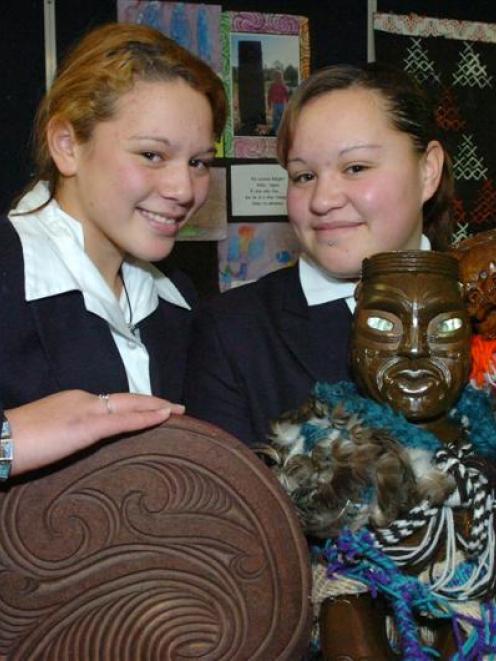 Nadia Jennings (12, left) and Freedom Te Moananui (15), of Te Kura Kaupapa Maori O Otepoti School in Fairfield, were winners in the 2007 Otago-Southland Regional Maori speech contest. Photo by Linda Robertson.
There is a direct correlation between the intensity of Pakeha paranoia about Maori and low familiarity with Maori culture and language. Learning te reo can only help to break down prejudice, suggests Rawiri Taonui, in an article to mark Maori Language Week.

Te Wiki o Te Reo is a time to celebrate the renaissance of Maori language, admire the metaphor of the korero and consolidate its survival.

Te reo is one of 26 languages in the Polynesian subset of the Austronesian linguistic group, which claims variants from Madagascar and Taiwan in the west through the Malayan Peninsula, Philippine and Indonesian archipelagos, Oceania, Micronesia, Melanesia, and across the Polynesia Triangle to Easter Island.

These were among the most widespread languages in the world a millennium before English obliterated the indigenous map with imperial pink.

Te reo has a legacy of loss.

It was banned in Parliament, courts, hospitals, government departments, local bodies and in church prayer and hymn, and superior Pakeha teachers beat Maori children for speaking in the words of their ancestors.

Intergenerational transmission broke down. The language began to die.

New Zealand can be proud of the spirit with which Maori have fought back.

When, in 1984, national telephone tolls operator Naida Glavish was demoted for greeting callers with kia ora, Prime Minister David Lange intervened, Glavish was promoted to the international exchange and kia ora beamed out to the world.

Te reo has come back from the brink.

The number of Maori korero-ing has more than doubled since 1980, the number of children tripled.

Maori using te reo at home has risen 17% since 2001. Maori TV and 21 iwi radio stations pump the beat of the korero to a multicultural audience.

Kai, kia ora, kia kaha and ka kite are embedded in the nation's idiom. Kiwiana and Kiwitanga together.

Naming children, it is now no shame to use a Maori name.

They do better in NCEA than Maori in mainstream schools because te reo builds a more confident eye-to-eye identity platform from which to participate in the wider world.

Wananga draw thousands of older Maori with free courses in te reo. By raising confidence they have helped 50,000 Maori back into employment.

Pakeha are becoming the majority of te reo learners in universities.

What about the future? There is room for improvement.

There is a gross shortage of Maori language teachers nationwide.

Central and local government and education employees need to spell and pronounce our names properly.

While improving, the mispronunciation of Maori words and names remains a norm; it's odd having to spell a 500-year-old name when ringing government departments in your own country.

Monolinguals ought not monopolise institutional decision-making in a multicultural society.

Moreover, proportionally fewer young Maori korero - just one in six under the age of 15, compared to one in four of 15 to 64-year-olds, and half of those aged over 65. The last fluent generation is passing quickly.

Some tribes have no native speakers left. Others have fewer than a dozen.

The quality of language of most speakers of Maori who have learned the language formally is not high.

Only 3% of New Zealanders are able to converse in te reo Maori.

What can be done? We need more immersion courses.

But strategies and organisations will not save the language on their own; people speaking in homes can.

Ngai Tahu's Kotahi Mano Kaika, that aims to get Maori spoken in 1000 tribal homes by 2025, is a good model.

Maori must become compulsory in all schools.

Young European backpackers at ease with themselves and other cultures seem characteristically more relaxed than Pakeha New Zealanders when entering marae for the first time.

Apply zero fees for te reo at all tertiary institutions.

There is a direct correlation between the intensity of Pakeha paranoia about Maori and low familiarity with Maori culture and language.

Learn te reo. Knowing the language of your neighbour is the foundation of mutual respect.

Bilingualism will break down prejudice in a multicultural country. New Zealand would be better.

Dr Taonui is head of the School of Maori and Indigenous Studies at the University of Canterbury.