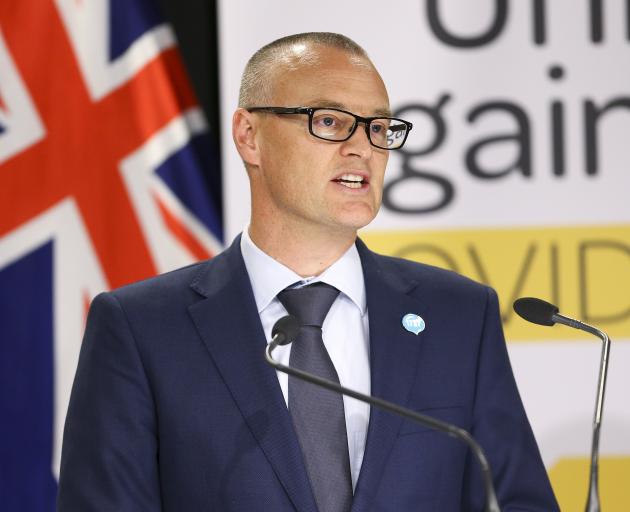 Health minister Dr David Clark addresses the media. PHOTO: GETTY IMAGES
One of the sad truths of politics is that it is incredibly punishing on the families of MPs.

Knowing this full well from his time working in ministerial offices, Dunedin North MP David Clark has been assiduous in keeping his wife and child out of the public eye during his own political career.

However, good intentions and political life do not always mesh well together, and Dr Clark’s story is a case in point.

He has had two major moments of public scrutiny in his surely time-limited career as Health Minister, and both of them have involved him trying to do nice things for his family.

First, in the midst of the nurses union nationwide strike, Dr Clark took 33 hours out of the country to escort his family on a long-planned overseas holiday, and returned to a clamour of controversy for seemingly having left his post during a crisis.

Then, this week, Dr Clark revealed that a couple of weeks ago he had taken his family to Doctor’s Point for a walk.

No-one would begrudge the parents of young children getting their charges out of the house to let off some steam ... except this was the first weekend of the country being in Covid-19 Level 4 lockdown, and all parents — no matter how stir-crazy they and their children might be — had been asked to stay at home.

Granted, there was some early confusion about just how far your bubble might venture from home base, but as Health Minister Dr Clark was an integral part of ordering the lockdown, a measure Prime Minister Jacinda Ardern had said was about saving lives, he absolutely had to respect the rules.

That very weekend, in an interview with this reporter, Dr Clark said: "We are four days into this stay at home, self-isolation, stay safe message and most people understand that, but we are getting some anecdotes of people who clearly haven’t understood the importance of that."

That is a quote which does not read well looking back from the perspective of this week’s events.

The first public revelation that Dr Clark had strayed from the bubble — in the most ill-advised political ride since Jed Bartlett crashed his new mountain bike in episode one of The West Wing — was survivable.

The bike track Dr Clark went to was not that far from home, and as a former top-level cyclist he was unlikely to can off on an easy trail — but it did not look good and he properly apologised for it.

Again, on this occasion, in disclosing and apologising, Dr Clark has done the right thing.

To quote him, he knew he had stuffed up, he knew he had been an idiot, and he offered to resign in full knowledge that this was a sacking offence — something that a visibly furious Prime Minister left no-one under any illusions about.

Having lost his associate finance role, it was deemed the Covid-19 crisis was too grave for Dr Clark to be dismissed from the health ministry at this point; Ms Ardern pointedly refused to contemplate what might happen if, and hopefully when, the Level 4 restrictions are eased.

The front-page image on Labour’s website shows Ms Ardern accepting the plaudits of her caucus after a rally speech.

Dr Clark is right behind the Prime Minister; they have had a close friendship in the past, but that will have been sorely tested in recent days.

This is a visual reminder of an issue which faces the South in the wake of Dr Clark’s presumed imminent departure from Cabinet.

At the start of Labour’s term in office, both Dunedin MPs were in Cabinet and the city — with former full-time Dunedin residents Grant Robertson and David Parker also sitting around the table — could be confident its concerns would be heard at the highest level.

If Dr Clark is asked to hand back the seals of office, Labour’s Cabinet will have just two South Island-based MPs, Wigram’s Megan Woods and West Coaster Damien O’Connor. Christchurch East MP Poto Williams is a minister outside Cabinet.

While Mr Robertson and Mr Parker are both guaranteed to give Dunedin voices a friendly hearing, the city may no longer have the strong voices it once did at the top table.

It certainly did the city no harm in getting the $1.4billion Dunedin Hospital rebuild across the line, and there will be fears that a future health minister might not be so personally invested in the project as Dr Clark was.

He deeply wanted to see this project through, but now he may have to watch someone else do so ... or even worse, see the project not be realised as he had dreamed.

The political humbling of a hard-working and personable advocate for the city is regrettable; hopefully Dunedin does not pay a price in loss of access, too.

If Dr Clark does indeed go — or even if he doesn’t for that matter — Labour could do far worse than involve its Invercargill list MP Liz Craig somewhere in the health team.

A public health physician with a specialty in child poverty, she would be a useful voice in these Covid-19 times and also a passionate advocate for the Prime Minister’s attempts to tackle child poverty.

David Clark will be back, if not in frontline politics, then working for the public good in some capacity. He’s that kind of guy. And I have a feeling that Dunedin is his patch.

I have been so disappointed by David Clark's performance as Health Minister and as our electorate MP that I am quite ambivalent about him being moved on. Ultimately, no matter how "hard working" Dr Clark might be, he has shown himself to lack the ability to address the serious issues faced by our health system, including the need to review the funding formula that has failed the South for so long. Add to this his inability to abide by the rules when his actions undermine the safety of the community and I think his credibility is done for. I for one will not vote for him again.

Clark has been punished enough, why isn't the media going after bridges with his travel arrangements?, so it's one rule for them and one rule for us is it?.

What on earth was he thinking? Was probably everyone else's first thought, clearly he wasn't. It's just remarkable to me, that the Minister of Health, would work through this thought process in his own mind, and come to the determination that firstly, it was ok to put his bike in a vehicle with his face plastered all over it, drive to another location, park the vehicle and go off on a bike track. Then secondly, decide it was ok to put his family in a car, drive to another location of some distance, and go walking with his family.
Now, I'm not a Minister, but I could have told him at the beginning of all that thought process, that it was clearly NOT ok.
He might be hardworking, but if commonsense is not engaged, then it's all for naught as they say.

He sounds like a certain DCC councilor. Dose whatever he wants, rules do not apply to him.

Spoken like a certain other councilor who has a beef against a certain councilor, fancy emailing all and sundry because you threw all your toys out of your cot, come on mate, the game is up, we know who you are.