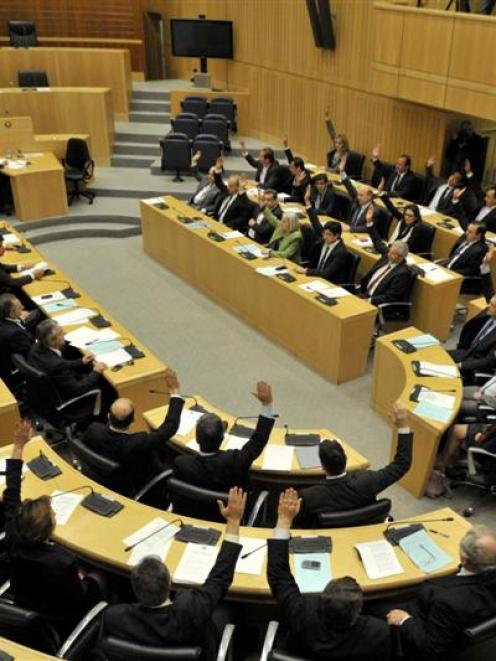 Lawmakers raise their arms to vote against the Bill to tax deposits in Nicosia this week. Cyprus' Parliament overwhelmingly rejected a proposed levy on bank deposits as a condition for a European bail-out. Photo from Reuters.
Could a failed bank robbery in Cyprus cause the collapse of the euro?

It's hard to imagine how anything that happens in Cyprus, with fewer than one million people, could bring down the common currency shared by 300 million Europeans, but there are few human behaviours as infectious as a run on the banks.

Strictly speaking, the Greek-Cypriots are not having a bank run, because their banks have all been closed since last Saturday and the cash machines will only give out €500 (about $NZ782) per customer.

But there would certainly be a nationwide bank run if they reopened the banks without strict limits on cash withdrawals and transfers overseas.

A financial disaster in remote Cyprus will not directly affect the fate of the rest of the European Union, but any suspicion that the bail-out of a EU country might involve the actual confiscation of money in people's bank accounts is financial and political dynamite.

The terms of the Cyprus bail-out have just confirmed that suspicion.

The banks in Cyprus had certainly got too big for their boots. They had grown fat on the deposits of Russians, many of whom were using the island republic as ''a gigantic washing machine'' to launder illegal funds.

And they had lent out far too much money, especially to Greek banks and companies: their loans amounted to eight times the entire country's national income.

Everything seemed all right until Greece's economy crashed and needed not one but two bail-outs. During the second one, last year, foreign investors holding Greek bonds were forced to take a ''haircut'': they had to agree to a 70% cut in the value of their holdings.

That gave Greece a little relief, but it plunged the Greek-Cypriot banks into a nearly terminal crisis.

So now it was Cyprus's turn for a €17 billion bail-out - but this time it was not the bond-holders who got a ''haircut''; it was the depositors.

Cyprus was ordered to raise €5.8 billion of the bail-out money itself. It was to do it by confiscating 6.75% of the money in the savings accounts of everyone with less than €100,000 in their account, and 9.9% of the money in all larger accounts.

In most people's eyes, that is straight theft. Worse yet, people in other EU countries realised the awful truth: EU bail-outs can cause bank runs.

If there's going to be a run on the banks, you want to be first at the counter. If you think there might be an EU bail-out for your country, you should get all your money out right away.

And while Cyprus is too small to be significant, much bigger countries like Italy and Spain, with one-third of the euro zone's population, are also potential candidates for a bail-out. Bank runs in those countries could spell the end of the euro.

How did the geniuses who designed this bail-out get it so wrong? They included the European Central Bank, the European Commission, and the International Monetary Fund, but the real culprit appears to be Germany.

Wolfgang Schaeuble, the German Finance Minister, insisted on targeting bank accounts in Cyprus (although they have never been directly raided in any other bail-out), and the rest of the geniuses went along with it.

Mr Schaeuble's problem was that there will be an election in Germany in a few months, and German voters are deeply reluctant to see their money bailing out (as they see it) feckless southern Europeans.

They are particularly unhappy to see it being spent to save Cypriot banks, where some 40% of the money on deposit belongs to Russians and much of it is ''dirty''.

So rather than make the Cypriot banks' investors (mostly other banks) pay the price of their folly, Mr Schaeuble made the depositors pay it instead.

Some of them were very rich Russians - though the really big deposits were probably moved to Singapore or Dubai a year ago, at the first hint of trouble - but most of them were ordinary Greek-Cypriots who were seeing their savings taken to pay for rich people's greed and stupidity.

So Greek-Cypriots took to the streets in protest, and they didn't go home when the Government promised to exempt accounts with less than €20,000 in them. Newly elected President Nicos Anastasiades urged Parliament to back the bail-out, but in the vote on Tuesday not a single MP supported it.

The whole deal is dead, and Mr Schaeuble is now warning that the banks in Cyprus may never reopen if it is not resurrected in some form.

Cyprus' finance minister is off in Moscow to see if the Russians will bail the country out. But the real crisis may be happening in other EU countries that are vulnerable to a bail-out, including Italy and Spain.

The geniuses swore that the Cyprus bank heist was a one-off, and that no such measure would ever be imposed on another EU country.

Nobody in Spain or Italy believes them, of course, and the wealthy and well-informed will already be moving their euros to accounts in other countries.

The less rich and knowledgeable will just be taking their money out of the bank and hiding it in socks under the mattress.

Could all this end up with bank runs that bring down the euro itself? It's still unlikely, but it's certainly not impossible.