Dark times for the silver screen 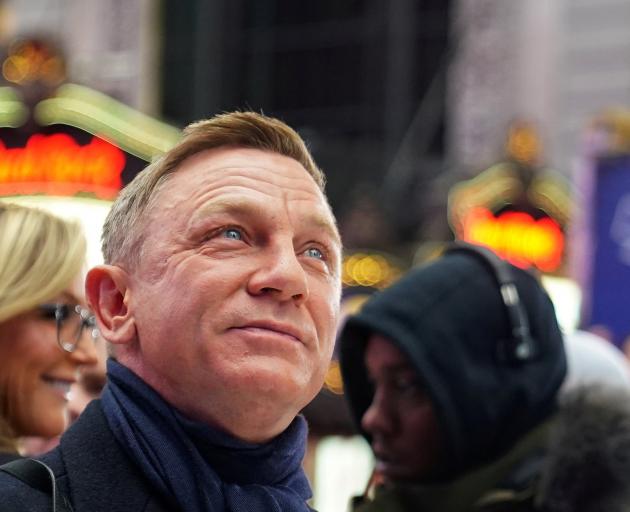 Actor Daniel Craig poses during a promotional appearance in Times Square for the new James Bond movie No Time to Die. the opening of the movie has been postponed from this month to next. Photo: Reuters
James Bond will wait, but movie theatres have no time for a virus, writes Tara Lachapelle.

During a pandemic, the close quarters of a movie theatre auditorium are among the last places anyone would want to be.

Already, the outbreak of Covid-19 has led cinemas in northern Italy and all across China to temporarily shut their doors.

The reality is that soon US exhibitors such as AMC, Regal and Cinemark may have to do the same — or suffer a massive decrease in patrons anyway. Studios are even starting to delay film releases.

MGM and Universal Pictures announced last week that they would postpone the opening of the latest James Bond movie, No Time to Die, from next month until November.

There’s still a lot of uncertainty about how badly the coronavirus will spread and what it will do to the economy. But what is clear is that the disruption could not have come at a worse time for the US movie-theatre industry in particular, where AMC Entertainment Inc, Cineworld Group Plc (Regal’s parent company) and Cinemark Holdings Inc together control nearly half the cinema screens and ticket sales, according to the Motion Picture Association of America. That’s in addition to theatres they operate in Europe and Latin America.

The US box office fell about 5% last year to $11.3billion ($NZ17.9billion), even with Walt Disney Co’s record-shattering release of Avengers: Endgame, the highest-grossing film yet, and a handful of other big features. In fact, Disney — thanks to Endgame, The Lion King, Toy Story 4, Frozen II, Captain Marvel and Star Wars: Episode IX — The Rise of Skywalker — almost single-handedly propped up the box office.

And still, it was unable to surpass 2018’s record ticket sales, or even the total for 2016, according to Box Office Mojo.

Theatres were already bracing for the sudden deluge of streaming-video services, which have been spending like mad on original content. New offerings from Apple Inc, AT&T Inc’s WarnerMedia, Comcast Corp’s NBCUniversal, Disney, and so on, may result in more people reserving trips to theatres only for the big blockbuster films worth venturing out to see.

WarnerMedia’s HBO Max is set to launch with a catalogue of Warner Bros movies in May, while NBCUniversal’s Peacock service coming next month will draw from its own film library. Disney+ has already managed to sign up more than 25million subscribers, and Netflix Inc has signalled that it is stepping up film investments after receiving 24 Oscar nominations, including for The Irishman, Marriage Story and The Two Popes.

As Disney turns its attention to streaming, it also does not have as large a must-see theatrical film slate this year, having pushed off Avatar 2 to 2021 and the next Star Wars to 2022. Even before the coronavirus outbreak, Rich Greenfield, an analyst for LightShed Partners, was predicting a double-digit drop in the domestic box office. More selective consumers means there is more pressure on the top 10 films to drive attendance, according to his January 6 report.

"As we look at the overall film slate for 2020, we simply do not see the excitement that will drive top 10 attendance," Greenfield wrote.

Disney’s perhaps most-anticipated release is the live-action remake of Mulan, which is set in ancient China and features an all-Asian cast. As of last week, teasers for the film were still promising a March 27 opening.

That said, a delay may be inevitable with Chinese theatres still closed and US theatres starting to give off that petri dish vibe.

The multiplex cinema companies are coming off a spending spree that has saddled them with debt. AMC made a pair of $1billion acquisitions in 2016, buying Carmike Cinemas in the US and Europe’s Odeon & UCI. Cineworld took over Regal for $US5.9billion (including debt) in early 2018.

They have also made expensive upgrades to their venues, adding more luxurious reclining seats and better food and drink options. AMC, which like the others is rated below investment grade by credit agencies, had $10.1billion of net debt as of December. That was six times last year’s adjusted ebitda.

AMC also posted a net loss for the fourth quarter and slashed its dividend. The company, controlled by Chinese billionaire Wang Jianlin, assured listeners on the February 27 earnings call that it had no theatres in Asia, though it did close some in Italy as a precaution. CEO Adam Aron said it should "be calming" that none of AMC’s debt comes due until 2024 and later, and that those securities are "covenant light". There are more than 40 confirmed cases of Covid-19 in Washington state, where Cineworld operates more than 300 screens, AMC has 181 and Cinemark has 73. Likewise, in New York state, where there are now 13 confirmed cases, Cineworld has more than 500 screens, followed by AMC at 308 and a little more than a dozen for Cinemark. For AMC and Cinemark, the biggest US market is Texas, while Cineworld’s is California.

"Health-related epidemics, such as flu outbreaks, could cause people to avoid our theatres or other public places where large crowds are in attendance," read Cinemark’s latest 10-K filing, part of a list of boilerplate-type risks that most people might gloss over during normal times.

- Tara Lachapelle is a Bloomberg Opinion columnist covering the business of entertainment and telecommunications.