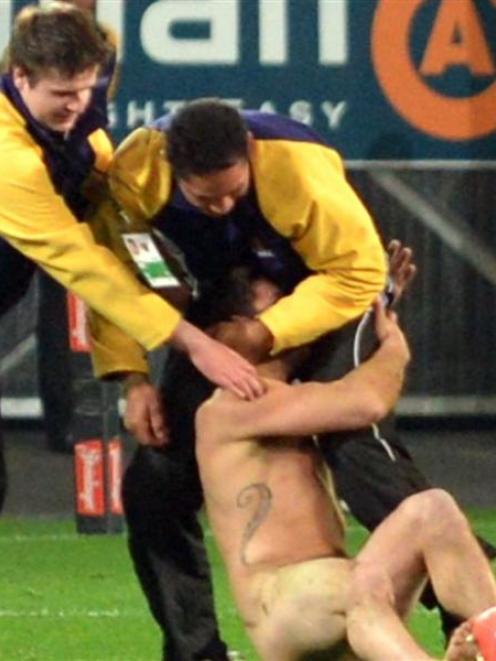 After all, it was just an incident secondary to the rugby test, streakers are not that rare, and no-one was hurt.

Just in case anyone skipped reading about it or seeing the video - which would be quite some achievement given the media coverage and the heated debate - this in summary is what happened: a naked man eluded security and ran on to the field. Looking a little bemused, he paused near the halfway line.

There, a security officer at rapid pace launched from behind and brought him down in a shuddering tackle. He was then unceremoniously, as is the custom, taken away.

Normally, that might be the end of the matter, apart from a couple of paragraphs in the newspaper and a brief follow-up when he appeared in court.

But, this incident was not normal because the aftermath of the flying tackle took off.

The video clip has had more than 400,000 views and strong opinions abound:

either the streaker got what he deserved or he was treated with unnecessary and dangerous brutality.

The division does not cut obviously across genders and ages, and views from various people are not always as predictable as they are on many issues.

It's no surprise, nevertheless, that those in the rugby hierarchy back the security man.

The safety of the players was paramount, he explained.

But did a drunk streaker of average proportions really threaten the muscle and might of All Black and England players?

What would have been the reaction if the streaker had been badly hurt, especially if he was your husband, son, friend?

As he was tackled, without seeing it coming, his head whipped back, and there was a serious moment of concern from many who witnessed the event.

On the other hand, security staff do have a job to do and any possible danger was eliminated with the decisive action.

And what would hindsight say if the streaker had in some way tangled with players and caused disruption and/or injury?

The streaker needed to be contained and it was perfectly reasonable to tackle him.

The question, as University of Otago dean of law Mark Henaghan explained, is, was the force used reasonable?

In Prof Henaghan's opinion, the ''dangerous'' tackle from behind was ''totally unnecessary''.

As he said, ''The law protects you whether you are behaving like an idiot or not.''

And as Prof Henaghan said, the idea the streaker deserved on-field punishment is wrong because that is the court's job.

Whatever our sentiments, the matter illustrates our personal and our society's hypocrisy.

We deal to the streaker not just as a pitch invader but for offensive behaviour when only a few hours before we have fun focusing on the Nude Blacks playing next door at the University Oval.

Alcohol sponsorship is crucial for rugby and flows freely at the ground - and we then condemn the consequences.

We endeavour to stamp out the scourge of violence and revel in ''smashed 'em bro'' big hits.

That is the nature of the human beast and human culture, and it will not change any time soon.

We live with inevitable inconsistencies in a complex world, and that is far from all bad.

But while we may be hypocrites, one and all, it is a little salutary to think about the treatment meted out to the naked man and our reactions, and what this all might actually expose about ourselves and our community.