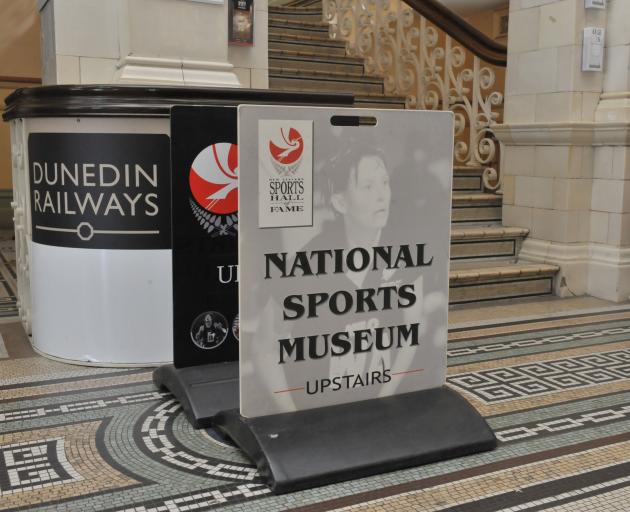 Photo: ODT files
Another of Dunedin’s attractions is on the edge of being lost.

Dunedin City councillors decided narrowly (on the mayor’s casting vote) not to provide another lifeline to the New Zealand Sports Hall of Fame. The council also decided not to express interest in continuing to host the facility at a council-owned venue.

The decision would have been relatively easy to make were it not for the generosity of the late Sir Eion Edgar. He decided, not long before he died, to pledge $500,000 to keep the wheels moving on a hall revamp.

Investment firm Forsyth Barr, of which Sir Eion had been chairman, added $200,000 to the cause.

Without council support and with Sport New Zealand suspending its annual $100,000 grant from the end of last year to the current hall of fame, it will take an extraordinary effort to retain a revamped facility.

A Christchurch bid to host the hall is thought to be one of four received. Others must see the worth of it.

One must hope all is not yet necessarily lost.

The Edgar family has called for fresh discussions about interim funding and has offered to contribute $50,000. Not surprisingly, the family is shocked the council made its decision without, it seems, contacting family members.

But as Sir Eion’s son, Jonty, said: “Let’s focus on trying to get Dunedin back in the picture.”

Dunedin already spends millions of dollars on its art gallery, Otago Museum and Toitu Settlers Museum. And there are dangers in the hall becoming another long-term drain.

Nevertheless, another dollop of interim funding, this time $100,000, would have been the right move while the visionaries and enthusiasts see what could be achieved.

The hall, unlike museums and art galleries, is something different, something not found in other cities.

It has to become a spectacular interactive attraction redeveloped for today’s age. A relatively low-cost operating model with innovative brains and smart minimal management is also required.

The council is right that it could not run the hall itself. But what about as a trust with a management core and sports-loving volunteers helping with day-to-day staffing? What else might be possible?

One suggestion is to host it at the Edgar Centre. The council’s subsidy could have been through foregoing venue rent, as it has been at the Dunedin Railway Station where the hall is now. If the cost of extending the Centre is prohibitive, is there another site?

Sir Ian Taylor said a group had been working on exciting ideas after Sir Eion’s offer.

He has questioned the quality of advice in the report to councillors when they made their decisions with the public excluded.

He said that report imagined basically a museum as before. On that basis, he too would have voted against more interim funding and council continued interest.

“What it did not take into account was how this asset could be converted into a self-sustaining, nationally funded, tourist attraction . . .”

Is it still possible for councillors to hear different views and for a few to change their minds? After all, Christchurch City councillors reversed their decision after an earlier resolution to reduce the capacity of its covered stadium.

The much-visited Cadbury World disappeared, and the future of Dunedin Railways, particularly the Taieri Gorge route, appears bleak. Yellow-eyed penguin numbers fall each year, and they are disappearing as a premier Dunedin attraction.

Dunedin has a lot to lose if this potentially top-notch opportunity is not taken.

Dunedin could not compete in a bidding war with the likes of Christchurch to host the hall if it came to that.

But, thanks to the generosity of Sir Eion and the interest of others, there are possibilities for something special and something that wins the day.

Meanwhile, the council is throwing in the towel on the Sports Hall of Fame. Surely, it is too early to give up on what could be a national attraction.