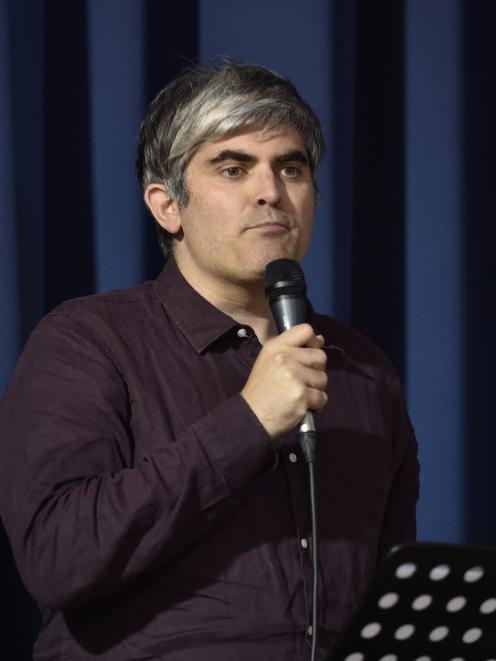 Dunedin Mayor Aaron Hawkins speaks at a public meeting last month relating to the lead levels in water supplies. PHOTO: GREGOR RICHARDSON
A lot of water has flowed down the Waikouaiti River since the first recorded lead level spike in the area’s water supply last August.

Fortunately, it appears no serious long-term harm has been done.

Everyone is again reminded of the importance of safe water supplies.

Contamination of water is highly dangerous. The 2016 infiltration of the Havelock North supply with campylobacter saw more than 5000 people falling ill.

If anything is core council business, it is water.

It is little wonder a wary eye is being given to the Government’s Water Services Bill which plans an upheaval of the current regulatory system and other changes.

There is widespread relief in East Otago that, after blood tests for most of the residents, lead levels are about what would be expected.

But there remain questions about the reasons behind the six level spikes.

Answers might never be found, although it is believed lead fittings on an old cast-iron pipeline in Waikouaiti could be responsible for three of the high readings.

This pipe is being replaced, and this is one of the reasons residents will continue to be supplied with separate drinking water to June at least.

The authorities have learnt the importance of keeping people well informed of issues and informed early. Dunedin Mayor Aaron Hawkins himself last week accepted communication could have been better.

The public focus on Waikouaiti and Karitane townships while Hawksbury Village felt ignored in the early stages was another matter of concern.

The case of the reading — which was undertaken for infrastructure purposes — that showed 40 times acceptable levels still surprises.

Why did no-one take any initiative when the reading occurred? And why did the email about it languish unread in the inbox of a staff member on holiday?

Mr Hawkins himself, and to some extent the chief executive, will have learnt lessons about leadership.

While neither might have been expected to know what was going on, it was their role as the leaders to take full responsibility, to front up and front foot once the incident flared.

They both did so at the big meeting at the East Otago Events Centre last Wednesday night.

Mr Hawkins, in particular, should neither have deflected decisions on delayed notification to residents to Public Health South nor tried to sit among the crowd during the fiery Waikouaiti meeting last month.

His place was on the stage, as the residents made plain.

The people of the area, and New Zealanders as a whole because of the wide publicity, should have a better awareness of the perils of lead poisoning.

Most of the 1500 residents were tested and two children and 36 adults were found with elevated levels.

"It really has shone a light that in New Zealand we are exposed to lead through our normal life, through work or hobbies," she said.

It is good the children can be followed up with medical expertise.

There are other sources of lead, paint for example, that contribute to environmental lead.

Although Dunedin and East Otago water has been the centre of attention over the past two months, the council has given water supply matters considerable attention over the years. Its record, while mixed, is actually better than for many councils. Wellington is the notable laggard in this regard.

Nevertheless, the past several weeks have been stressful for the people of Waikouaiti, Karitane and Hawksbury Village. And their worries and inconveniences have yet to entirely go away.

Instead of politicians, let the monkeys govern DCC; at least they will only steal the bananas!

Well we have learnt that water testing is not up to scratch; the water pipes are past their sell by date and DCC are not up to the job. As for the mayor..........