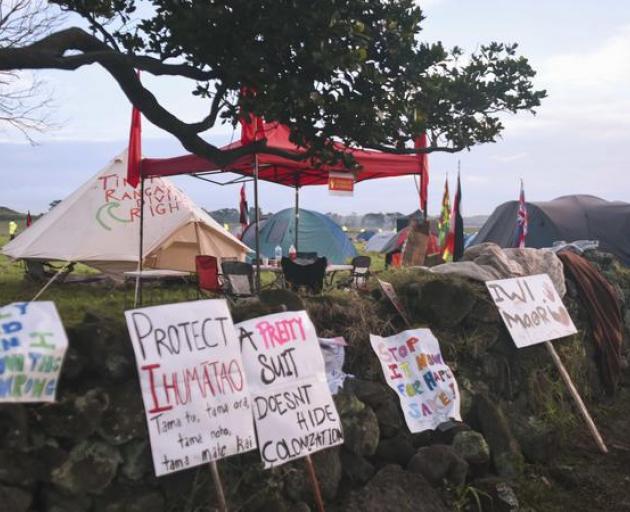 Protest banners at Ihumatao. Photo: Nicole Hunt
Finance minister Grant Roberston claims the move taken on Thursday to solve the Ihumatao dispute was not precedent-setting, that it is outside the Treaty of Waitangi process.

Almost $30million from housing sources was used to buy the land off owners Fletchers. Some houses are to be built and a small group, including the occupiers, will be established to work through issues.

This includes the question of final ownership.

The solution has been facilitated by Kingitanga, the Maori King movement, which will stay heavily involved.

Mr Robertson called it an "innovative and unique solution for these unique circumstances".

Here’s hoping he is correct. New Zealand has advanced a Treaty settlement process that recognised many injustices and confiscations occurred. But private land was excluded from settlements. Iwi wronged were given some money and, for example, the right of first refusal when Crown land came up for sale.

This, generally, made the compromises palatable and pragmatic. Claims against land that had become private would open a massive minefield.

History had run a course, and turning back the clock 100-plus years was not feasible.

Before the occupation at Ihumatao, local Maori had come to an agreement with Fletchers that among the 490 houses were some for Maori. Part of the historic site would continue to be protected.

But other Maori were appalled that the area would change so markedly, that a place of such important cultural significance and blatant historic injustice would be largely lost to a housing development.

The protests grew and the site was occupied. Last year, this reached a crescendo when attempts were made to evict the occupiers. The Ihumatao protest increasingly came to be seen in many circles as a signature fight for justice and Maori rights.

There is no doubt Mr Robertson is correct when he described the Ihumatao situation as complex. He is correct, too, in seeing that the occupation had been developing into a divisive Bastion Point-like cause.

Prime Minister Jacinda Ardern became involved and the Government struggled for a way out. A way forward seemed to have been found early this year. But this was blocked by coalition partner New Zealand First.

Almost inevitably, long-suffering taxpayers via housing funds came to the rescue. The pressure from protesters succeeded.

No wonder National and Act have raised alarms about property rights, about a future where land occupations become more and more common, where activists lay claim to culturally significant private land.

Will Treaty settlements never be full and final? Will grievances always recur with each decade and each generation?

Perhaps National and Act’s arguments could be ignored as just the bleating of opposition. Perhaps Mr Robertson could be believed that unique Ihumatao is, indeed, outside the Treaty process and does not set a precedent.

This, however, is what Maori co-leader Rawiri Waititi had to say. The deal should be taken as "an important precedent" for the Crown addressing injustice by returning confiscated land to Maori outside of the Treaty settlement process.

"We know that there are many other ‘Ihumatao’ right around the country sites of huge significance that mana whenua are fighting to have returned.

"It is the Maori Party position that no Treaty settlement is full and final if it is unjust and that Treaty justice must mean the return of whenua Maori into the hands of whanau, hapu and iwi."

Time will tell whether the Government has managed to assuage the Ihumatao sore with a pragmatic and one-off solution, or whether occupations on private land will become a more common means to assert Maori rights.

The flags at Ihumatao might be being lowered. But, given Mr Waititi’s and Ms Davidson’s reaction, Ihumatao could well flag a growing form of assertion of Maori place on Aotearoa land.