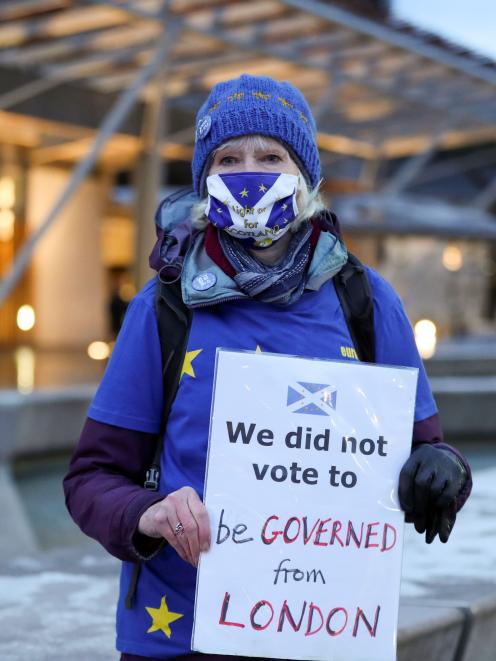 An anti-Brexit protester holds a sign outside the Scottish Parliament in Edinburgh. PHOTO: REUTERS
So Brexit finally came to pass.

Britain voted to leave the European Union four and a-half years ago by 52% to 48% and a "leave" campaign characterised by mistruths and exaggeration.

It was always going to end poorly, and it has.

At least, a no-deal crash out of the EU was averted.

Britain's middling place in the world slips a little more.

It becomes just that much poorer and that much less influential.

They might puff their chests in independent and patriotic pride. They might think they never, never will be slaves to the European Parliament, the European Court of Justice and European rules and regulations.

But how hollow it all sounds.

The tariff and quota-free accord might be a relief but the services sector, where London is pre-eminent, will suffer. It has already, amid the uncertainty and looming separation since 2016.

Travel, living and work freedoms have been sacrificed, and the Northern Ireland situation remains vexed.

As for Scotland, pressure for independence grows, not that Westminster will allow for a referendum any time soon. Scotland's citizens know the value of the EU, for all its weaknesses.

Nations tend to lose power and prosperity by degrees.

The undermining of Britain began with the Brexit vote itself, and will continue now the deed is done.

Any comparative decline is unlikely to be abrupt because the country will muddle through. Institutions, companies and individuals will adapt as they can.

The Office for Budget Responsibility puts the loss of GDP over 15 years compared to remaining in the EU at 4%. That is the equivalent of a vast amount of money and a bigger hit than the Covid-19 pandemic.

Such loses will be incremental and across many fronts.

Nevertheless, the United Kingdom has shot itself in the foot and will hobble, even if the injury is far from fatal.

Maybe, some time down the track some sort of trade deal will be possible.

We can take little comfort from the pre-Brexit assurances from the politicians.

Led by the clown-prince Prime Minister Boris Johnson, once a journalist sacked for making material up, he and the Brexiteers have already claimed so many benefits that failed to come to pass.

The irony is that so much of Britain's new-found freedom — "freedom in our hands" as Mr Johnson puts it — will be illusionary.

Britain still sits on the edge of the massive EU, depending on that block for most of its trade and wealth.

Britain, to retain its free access, will not be able to deviate in substantial ways from those rules and regulations. If it does, on for example environmental or labour standards, Europe has the right to question that access.

Meanwhile, Britain's businesses are burdened, at the very least, by much more paperwork.

And its citizens have lost much of their freedom to work, travel and live in Europe.

Britain will remain, as it was in the talks, the small and weak partner when further discussions and disputes arise. There is still much to be worked through, and the processes of dealing with and clarifying issues will not end.

Britain remains, despite any fantasies of freedom, shackled to the Continent.

King Henry VIII and his breakaway from papal dominion all over again.

Excellent piece, sums up the situation exactly. Brexiters, ask yourself this, if Trump and Putin say it's a good thing does that mean good for you or them?

Another EU propaganda piece. That 4% drop in GDP is based on the assumption that the UK will do nothing to rectify the loss. It is already working on many trade deals including preliminary discussions with the CPTPP. There are more British citizens living in Australia alone than in the whole of the EU so Brits want easier access to the rest of the world and hopefully that will be reciprocated again. The picture says it all "We didn't asked to be governed from London". Most rational people should want direct democratic governance rather than trading off sovereignty for ease of movement between countries. The road to Brexit started when the last UK Labour Government reneged on its manifesto pledge of a referendum on the EU Constitution then ratified the Treaty of Lisbon in 2008 with no democratic mandate. That Treaty was intended as a significant building block to a United States of Europe federal governance structure.

The ravings of a Qanon cultist.

Brexit was stupid from the start and not good for anyone except the Brexiteers lining their own pockets. That doesn't mean the EU hasn't played a role in messing things up, it certainly has its faults and is a gravy train for the bureaucrats who rule. Sadly the editorial has all the hallmarks of a chip on the shoulder kiwi. Middling? - still has the 6th biggest economy in the world (Aus 13th , NZ 50th); 28 universities in the world top 200 (Aus 9, NZ 2). Not bad for a middling country, when will we get there?

The first shackles of a global prison have been broken. Now to break down the walls and free the people.

Just keep clear of pizza parlours PB, Hillary is waiting for you.