Lessons must be learnt from flooding 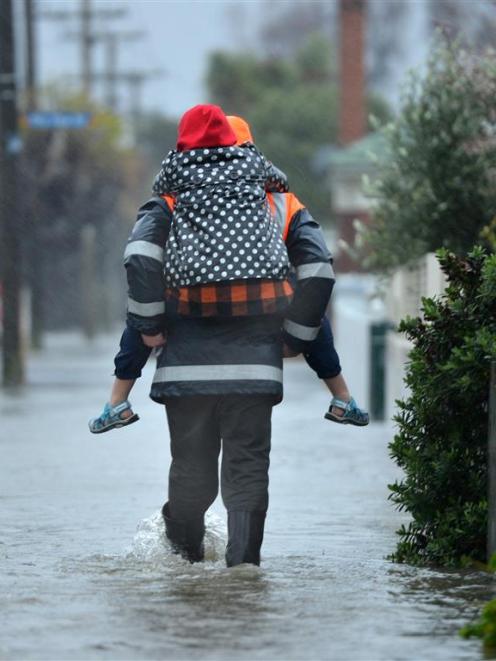 The Dunedin floods of June 3 should not have occurred with such devastating effects for so many.

And the lack of response from Dunedin Civil Defence has simply posed more questions than answers.

South Dunedin has long been a community of labourers - workers who epitomise the stoic and egalitarian attitude New Zealand prides itself on.

It is communities like these which embrace a firm "can-do'' attitude, staunch, resilient, and humble.

It is for these people, this hard-hit community, along with those in Mosgiel, Brighton and other parts of Dunedin that answers are needed.

Why did residents not get consistent information from TV and radio during the flood event?

Why were residents of South Dunedin and parts of Mosgiel not advised to evacuate?

Why was there no prepared assembly point for evacuees in South Dunedin?

Why were 31 of our most vulnerable citizens left in a flooded rest-home overnight?

Why did the DCC call centre close at 5.30pm?And most of all, why was a local state of emergency not declared in South Dunedin on Wednesday, June 3?

The definition of "emergency'' according to the Civil Defence and Emergency Management Act 2002 means a situation that "causes or may cause loss of life or injury or illness or distress or in any way endangers the safety of the public or property in New Zealand'' and "cannot be dealt with by emergency services, or otherwise requires a significant and co-ordinated response''.

On June 4, I rang the Civil Defence Controller in Wellington to specifically ask whether a state of emergency could have been called for a part of Dunedin, and was told yes.

Declaring a state of emergency would have ensured Civil Defence was formally on hand to provide proactive evacuation assistance, road clearance, dissemination of information, and emergency food and accommodation in the immediate aftermath.

In response to my request as to why a local state of emergency was not called in South Dunedin, Dunedin Civil Defence responded that "at no time did emergency services indicate the situation was beyond their capabilities''.

Yet the police, fire, and ambulance services had all units committed at peak time during the flood event.

They were stretched, and they were insufficiently supported.

On that day alone the Fire Service received 289 calls, compared with 20 calls in total the previous Wednesday.

It was so stretched that its multiple incident procedure policy (MIP) had to be activated.

This is triggered only when "the concern is not able to cope with the workload and may necessitate the reduction of Fire Service responses to incidents''.

Its role was to co-ordinate the response effort, liaising with emergency services, health and community providers.

However, it was clear Dunedin Civil Defence was unprepared.

Dunedin is, in my opinion, ill-served by its civil defence systems and personnel, as my evidence-based questions clearly show. -

● How aware was the EOC of the event's severity? It was apparent the EOC was waiting for information, not actively seeking it.

With only 108 calls in total, it is not surprising the EOC did not appreciate the magnitude of the flooding.

Correspondence with a St Kilda volunteer released under OIA reveals more candidly that "the local EOC closed even though people were still needing help''.

● Why was there no co-ordinated response to advise those in flooded homes what to do and where to go, and no designated assembly area?

Despite raising it at the first meeting of the EOC at 1.30pm on June 3 "the question was where do we assemble people in South Dunedin?'', it was left to Marine Search and Rescue to set up a volunteer base at St Kilda, while the Saddle Hill Community Board arranged for 16 evacuees to sleep overnight at the Brighton Surf Club, with no EOC help.

As the chairman of the community board said: "We now know that we are on our own''.

● Why did the Dunedin City Council close its call centre at 5.30pm, leaving residents struggling for consistent information, unable to get through, or to be told to contact emergency services rather than the EOC?

And why was there subsequently a fault in the DCC phone system which resulted in reporting data for calls being unavailable for the month of June 2015?

All of the community board representatives expressed frustration at not being able to get hold of the EOC and were left to fend for themselves in their communities.

● Why was the evacuation process of a 93-bed rest-home delayed, and why were some residents left in the facility?

The Dunedin Civil Defence manager was briefed on the morning of June 3 that the rest-home would be in need of urgent evacuation, requiring a significant, co-ordinated effort.

Ambulance crews evacuated 29 residents mid-afternoon but 31 hospital-level residents had to remain in the flooded rest-home overnight, amid power outages and sewage leaks, unable to move, due to there being "no capacity in the Southern district.''

While it is up to individual rest-homes to have their own evacuation plans, these were exceptional circumstances.

Declaring a state of emergency would have provided further evacuation assistance and advice.

● Why did the EOC close just over an hour after Thornbury House, a high-level dementia unit in St Kilda, rang at 9.30pm to say that water was lapping at the door?

The unit was advised only that Dunedin Civil Defence would be on hand should the situation worsen.

● Why did no-one know who was in charge and what roles they had?

The police at the cross-agency flood debrief held on June 25 stated many on the ground thought a state of emergency had been declared.

Those present at the debrief agreed it was difficult to give standard responses to queries by members of the public.

The Otago Regional Council had 18 staff in "monitoring roles'' yet were not given a place at the EOC.

No-one from Marine Search and Rescue was present at the cross-agency flood debrief held on June 25, and neither were the mayor or chief executive.

● Has data from the door-knocking exercise by the DCC and community groups a week following the floods been cross-referenced with public health and hospitalisation figures from this winter? Is there a cross-agency approach for this sizeable community already under stress from poor housing, low incomes.

And if not, why not?

Fast-forward to 4pm 17 days later, on June 20, when a state of emergency was declared in Wanganui.

Civil Defence Minister Nikki Kaye issued a press release saying the declaration was "to enable about 100 people living near the Wanganui River to be evacuated''.

The Government quickly committed more than $3million to the flood relief, along with a full civil defence response during the flooding.

The risk of contaminated floodwaters through hundreds of homes in South Dunedin and other parts of Dunedin on June 3 was never considered a big enough risk to initiate such a response.

The cost of the Dunedin floods is now well over $30million.

Six months later, the South Dunedin Winz office is still to reopen and many families are still displaced.

Now we've had a major report released by the Parliamentary Commissioner for the Environment which shows nearly 3000 low-lying South Dunedin homes are the biggest population at risk from the effects of sea-level rise.

But let's not confuse poor local decision-making, poor systems and lack of co-ordination with a slow but inevitable impact on a low-lying, densely populated part of our city.

The two issues are separate.

It's simply not good enough for council decision-makers to hide its poor performance behind the inevitability of rising groundwater, with a collective shrug.

Let's sort the systems and the decision-making, get our house in order and get some accountability happening quick-smart.

Core services for which we pay rates are not "nice to have'', they're essential.

If they're not working properly, being maintained properly, sort it out and be transparent.

And let's get under way a longer process for our city to address the biggest impact climate change has on an urban centre in New Zealand.

We need a great deal more than top-level generalistic statements about supporting measures to address climate change from city leaders.

South Dunedin faces an "end game'' only when the community gives up - and I can give an absolute assurance that this community is not giving up, and neither will I, as their MP.

We also owe it to them to ensure the history of the June 3 floods never repeats.