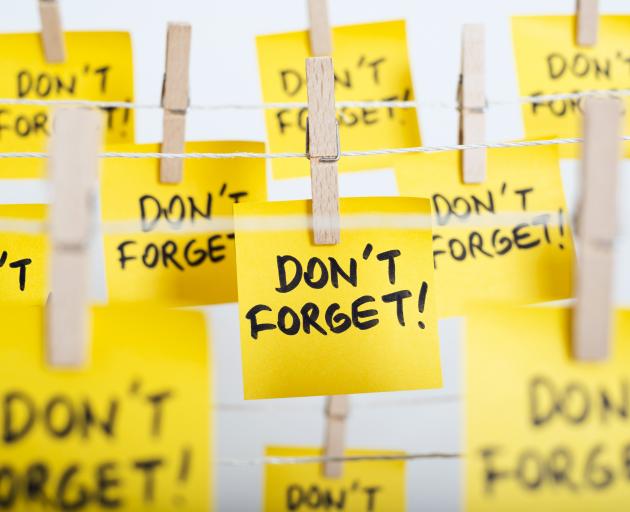 Brain fog arises from numerous causes. PHOTO: GETTY IMAGES
My father has the most impressive memory I have ever encountered. He can recite entire books of the Bible, standing there, his hands clasped behind his back, a faraway look in his eyes. There are many things my Dad and I share — our wide, flat hands, our hideous temper, our penchant for mischievousness and riddles. But what I treasured most about our genetic relationship was our ability to memorise things on the spot and then regurgitate them later, to rapturous applause — in my Dad’s case — or to the mild bemusement of my friends — in mine.

To be honest, my memory — along with my ability to make up nonsense on the spot — was the main reason I coasted through high school and my first years of university. Give me a list of word couplets or French definitions, a bunch of flashcards, and an hour in a secluded spot, and I could ace any multiple choice test.

But these days, I feel like my brain is a sieve. Previously I likened my brain to a goldfish, but I’ve recently learnt that goldfish memory spans are nowhere near as short as five seconds, as is commonly believed. Goldfish can apparently remember things for at least five months. I can only dream of such abilities.

All this to say, since contracting glandular fever and developing chronic fatigue syndrome, my memory has all but disappeared. I currently live with a 93-year-old gentleman and his memory is better than mine. I frequently repeat conversations, or launch into a story, only to find that my conversational partner is experiencing deja vu — I have told them the exact same thing the previous day.

Of course, it’s important to distinguish between the different types of memory. Most scientists agree that there are at least four different types of memory: working memory, sensory memory, short-term memory and long-term memory. I only studied psychology for one year at university so I won’t try to dissect the minutiae of these categories. Suffice to say, I think I have issues with all the above.

ME/CFS is an awful beast. It has robbed me of so much — my physical health, my waking hours, time spent with loved ones, and cognitive abilities. A primary symptom of ME/CFS is something called ‘‘brain fog’’ — namely confusion, a lack of focus, forgetfulness and impaired mental clarity.

Brain fog arises from numerous causes, but in my case, it’s predominantly the horrendous fatigue that impacts my ability to recall things. It’s hard to be alert when you’re constantly exhausted. I also sleep poorly and am frequently stressed, which no doubt impairs my ability to remember where I left my keys or whether I’ve had breakfast or not.

My short-term memory is the most impaired. I can’t concentrate or sustain my memory, and I struggle to process incoming information. I find it hard to retrieve stored information — gone are the days where I could recite verbatim a poem I had just heard. Instead, I find myself struggling to locate the right word, to articulate myself, to put a name to the pain in my chest or the swelling of joy in my throat.

This frustration is of course incomparable to those diagnosed with dementia or Alzheimer’s. I know myself, I always know where I am, and I have a largely complete long-term memory. But I can’t help feeling sad that at 26 years old, I struggle horrendously with my short-term and working memory.

What I feel most profoundly is a sense of loss — not just for my memory, but for who I was in past moments in time. My friends tell me of things I have said and done and I feel like I am listening to stories about a stranger. I do not recall what past Jean has done or said. It is as if she is a dream self or a parallel version. She exists in theory — but not in practicality — or at least not in any version I can summon up. I miss the lost parts of my story — the bits of myself that have been consumed in my own personal fire of Alexandria.

I also mourn my quick wit, my ability to drily recall something a friend said the previous day when he happens to contradict himself in the present moment. I feel slow and stupid, like I’m wading through Chelsea golden syrup.

What’s worse is the fact that I’m constantly reminded of my previous abilities. It’s like passing the ruins of a beautiful cathedral and seeing pigeons defecate on the fractured stained-glass windows.

Practically, it’s also incredibly frustrating. I lose things constantly. I have learnt coping mechanisms though. I keep a notebook and pen with me constantly, and I keep multiples of everything — my keys, a chapstick, my ID — in every conceivable useful space, from my handbag to the empty flowerpot in the garage.

But the worst is my newfound distrust of myself. Did a certain event or conversation really happen? Or did I merely think about it? Or is the act of thinking indicative of its actuality? I never know.

I have a constant fear of being a nuisance. Two of my previous relationships ended because I was so annoying. I can’t help but worry about coming across as uncaring or thoughtless because I forget things people tell me unless I have the presence of mind to write it down immediately. I feel like a complete dunce repeating questions, asking people to reiterate directions or remind me what we were talking about. I do not feel myself.

But I still have hope, regardless of how unfounded said hope may be. I am constantly researching new mnemonics, brain puzzles, and various tips and tricks for recalling things. I take photographs of every experience I wish to recall, I write down particular moments, and I obsessively document much of my day on social media. I do my utmost to remember my past self.

I also try to focus on the silver linings. I’m able to rewatch and reread good movies and books. Sometimes I’m blessed with the ability to forget horrible memories. Most of all, I’m forced to live in the moment, because my past self does not interject into any current conversation or experience. She does not remind me of what I thought yesterday, or what I said last week. I can happily relive certain moments and experiences time and time again.

As Ingrid Bergman once said, ‘‘Happiness is good health, and a bad memory.’’ At least I’m halfway there.