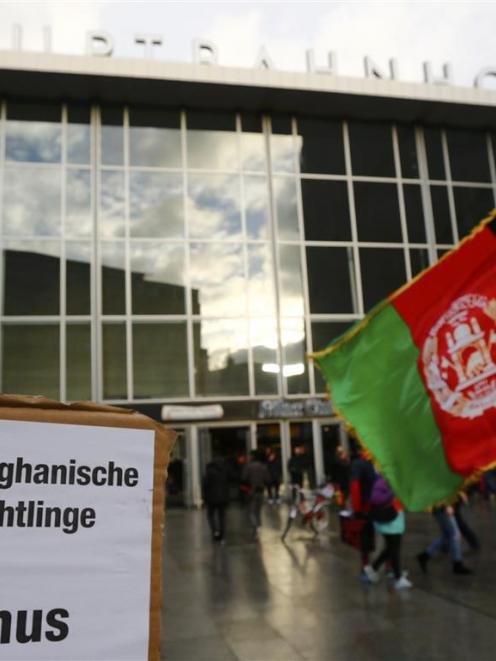 A man holds Afghan flags next to a placard reading ‘‘Afghan refugees against sexism’’ outside the main railway station in Cologne, Germany, where the majority of New Year’s Eve assaults on women by Muslim men took place. Photo from Reuters.
The French left does political correctness and moral outrage much better than the American left, so the row over what Algerian novelist and journalist Kamal Daoud recently said about sex in the Arab world has been bigger and louder in France than in the United States. But it is equally stupid in both places.

Kamal Daoud's day job is writing for a French-language daily in Oran, Algeria's second-biggest city, but he is a big new name in French literature, having won the prestigious Prix Goncourt last year for his first novel. And being a journalist, he wrote a couple of opinion pieces about the mass sexual assaults on German women by Muslim men (some of them recently arrived refugees) in Cologne, Hamburg and Stuttgart last New Year's Eve.

One article went to Le Monde in Paris, the other to the New York Times. In both, Daoud deplored the exploitation of the attacks by right-wing parties in Europe, where almost a million Muslim refugees have arrived in the past year and anxieties about a ‘‘cultural invasion'' are high.

But he also wrote about the task facing Europeans who have to integrate these immigrants into their society, and he didn't pull his punches.

‘‘[The immigrant] comes from a vast, appalling, painful universe - an Arab-Muslim world full of sexual misery, with its sick relationship towards woman, the human body, desire. Merely taking him in is not a cure,'' he wrote in Le Monde.

The sexual misery in the Arab world is so great, Daoud continued, ‘‘that it has given birth to the porno-Islamism that the Islamist preachers talk about to recruit their true believers: descriptions of a paradise that is close to a whorehouse as a reward for pious men, fantasies of virgins for the suicide-bombers, the sexual harassment of women in public spaces, the puritanism of the veil and the burqa''.

He warned that giving Muslim refugees in Europe ‘‘papers and a place in a hostel is not enough. It is not just the physical body that needs asylum. It is also the soul that needs to be persuaded to change''.

This task will take a very long time, and Europeans should be aware of that.

This is what really enraged the right-thinking opinion leaders of the French left. A ‘‘collective'' of intellectuals and academics published a counter-article in Le Monde in which they accused Daoud of ‘‘feeding the Islamophobic fantasies of a growing part of the European population''.

His call for Muslim immigrants to be taught Western values was ‘‘scandalous, and not only because of the same old claptrap about the West's mission to civilise and its superior values. [Daoud] is effectively saying that the deviant culture of this mass of Muslims is a danger for Europe''.

It was pure character assassination, but Daoud's response was mild: ‘‘I wrote it driven by shame and anger at what my own people had done, and because I live in this country and this world.''

But the worst betrayal was by Daoud's close American friend Adam Shatz, who wrote a long and favourable profile of him for the New York Times last year.

‘‘It is very hard for me to imagine that you truly believe what you have written,'' Shatz wrote in the same paper last month.

‘‘This is not the Kamal Daoud that I know.''

Presumably drawing on his vast experience in these matters, Shatz explained to his Muslim Arab friend that sexuality in the Arab-Muslim world is not universally a ‘‘misery'', and that the Muslim men who attacked German women on New Year's Eve were probably ‘‘not under the influence of Islam, but of alcohol''. (In fact, they were probably under the influence of both.)

Shatz was particularly upset by Daoud's suggestion that the attitudes of Muslim immigrants to sex and women were a ‘‘sickness'' to be ‘‘cured''.

The same language, Shatz said, had once been applied to Jews.

As the old adage says: Heaven protect us from our friends.

Daoud is being punished for speaking the truth - that the sexual attitudes of Muslims recently arrived in Europe often differ drastically from those of the Christian and post-Christian majority - but he would have suffered less abuse if he had put this difference in its proper historical context.

The sexual inequalities, dysfunctions, fantasies and hang-ups that he identifies as a specifically Islamic burden were almost all present in Christian societies too just a few centuries ago. Even today, radical Christian sects (and ultra-orthodox Jews) struggle under the same burden.

It is the same because Muslims, Christians and Jews actually belong to the same broad civilisation and the same religious tradition - Muhammad, Jesus and Abraham were all born within a long day's drive of one another - so all they inherited the same brand of patriarchy.

The Christian societies (if you can still call them that) are escaping from it now because they got a couple of centuries' head start on the Muslims in the process we call ‘‘modernisation''.

It's not really a fundamental cultural difference at all. It's just a question of dates, but that means that at the moment the differences are very real - which is all Daoud is really saying.