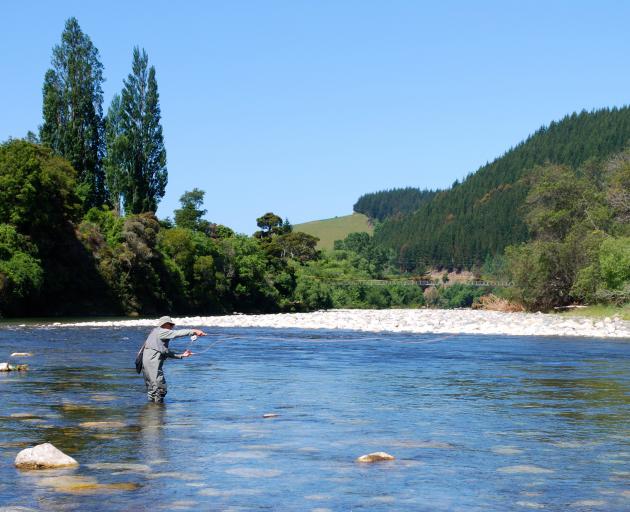 It is entirely due to Fish & Game that many of our finest rivers are now protected from despoliation. PHOTO: GETTY IMAGES
There is nothing  wrong with the existing Fish & Game structure, and no valid reason for radical change, writes Dave Witherow.

Recent reports of trouble within Fish & Game conform to a standard script which surfaces about once every decade.

The whole organisation is no longer fit for purpose, according to the critics, and it needs to be reviewed and reorganised if confidence is to be restored.

Before swallowing this story it might be well to remember that Fish & Game is in fact a fine example of democracy in action, whereby anglers and hunters elect their own representatives to manage their own resources.

It is regionally based, with 12 autonomous councils plus a co-ordinating body in Wellington, each employing professional staff but with all councillors serving unpaid.

The whole organisation is self-funded, making no claims on the public purse, but its work is of great benefit to the natural environment in general. Its record of achievement has often been noted by the present Minister of Conservation.

In being directly responsible to its stakeholders, Fish & Game is a unique organisation — not just in New Zealand but in the world. And it is entirely due to Fish & Game that many of our finest rivers are now protected from despoliation.

The devolved nature of Fish & Game represents its strength and enduring relevance. Wildlife habitats vary dramatically from one part of the country to another, and the differing management strategies required are best determined by the people who live in each specific area. Techniques that are appropriate in Northland may make no sense in Southland.

This was well understood by the Acclimatisation Societies — the forerunners of Fish & Game — who operated very effectively for a century or more without the need for a separate presence in Wellington, which dates only from 1990.

This body, the New Zealand Fish and Game Council or NZC, has proved to be a mixed blessing.

The recent criticisms and demand for a review are no more than a storm in a teacup — a drive for power and central control by some within the NZC, helped along by a few self-interested external allies.

It reflects the perennial bureaucratic urge to expand that has seen the Wellington office increase its staff by more than 300% in 30 years.

There is no demonstrated need for this top-heavy establishment. The resources are in the regions, where all the vital work is done, yet in Otago and Southland, for example, staffing has remained more or less static during this same period.

There have also been complaints, following the "dumping" of a longstanding chairman, about the presence of farmers on the NZC.

Farmers, it is claimed, have a fundamental conflict of interest when it comes to many of the activities of Fish & Game, and on account of this they may be unfit to serve as councillors.

This is fanciful and in fact nonsensical.

Conflicts of interest are impossible to avoid in a country the size of New Zealand, and if all the potentially conflicted anglers and hunters stood down from Fish & Game councils there would be very few councillors left.

The "dumped chairman", for example, was a fishing guide — an occupation involving numerous points of conflict with the founding principles of Fish & Game. Yet he served as chairman for years.

The main shortcoming of Fish & Game, according to its latest critics, is due to the fact the NZC is composed of councillors appointed by the regions.

These appointees, being inevitably blinkered by their regional concerns, are said to be incapable of taking the wider viewpoint appropriate to a national body.

To get round this it is proposed that NZC councillors should be elected entirely separately from those in the regions, in the same way as local and central government representatives are independently chosen. We do not allow local bodies to select our MPs, so why is this incestuous system tolerated within Fish & Game? Complete independence would solve the problem.

It would be hard to think up a more crippling idea. There are no valid parallels here. Central government has entirely different areas of responsibility from local government — defence, education, policing, welfare and foreign affairs, to name just a few.

But Fish & Game’s interests remain the same at all levels, and its NZC office serves primarily as an interface with the government of the day in Wellington. The NZC has no functions that do not arise from regional concerns. It manages no natural resources, and it generates no income — all its funds being supplied by the regions.

To suggest this body be elected from a separate field of candidates, and to ban regional Fish & Game councillors from eligibility, would be to ensure a chaotic breakdown of the existing structure. All the ecological and managerial knowledge accumulated within the regions, and fed back to the NZC through its regional representatives, would become unavailable.

Such a council would be operating in a vacuum, flying blind.

There is nothing fundamentally wrong with the existing Fish & Game structure, and no valid reason for radical change. The NZC’s role might usefully be more clearly defined, its surplus staff trimmed, and the recurring tendency to act as a governing body, directing the regions as it sees fit, should be ended.

This level of authority was never part the original intention, and its persistence has caused much mischief.

In an era of unprecedented environmental degradation, it is inevitable that any voice for the protection of threatened natural resources will attract opposition from those whose interests lie elsewhere.

No organisation is beyond criticism or improvement, but to suggest a wholesale rearrangement of Fish & Game on the basis of the current overblown complaints is irresponsible.

Fish & Game has served anglers and hunters well for several generations, and its conservation mandate is of far-reaching and cost-free benefit to the wider public.

Throughout its history it has continually evolved and renewed itself in response to changing circumstances — an adaptability seldom matched by comparable institutions.

It a unique example of Kiwi grass-roots competence, and if the minister is of a mind to review it, she should say so now, and make it an election issue.