Oxford life offers insights into a world of privilege 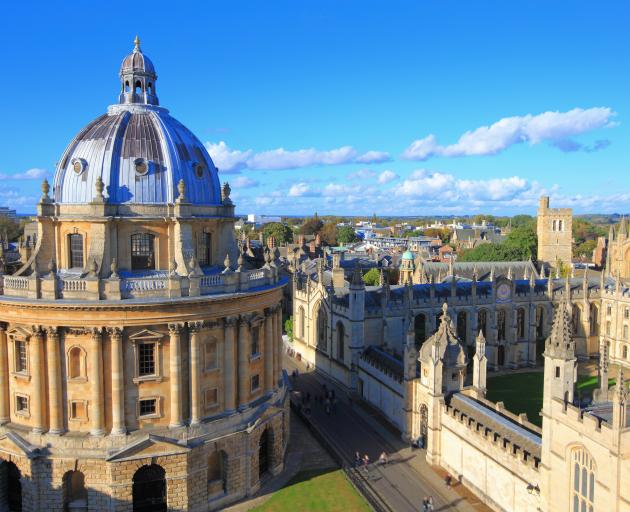 A private education and a degree from Oxford (pictured) or Cambridge are essentially a golden ticket to the top. Photo: Getty Images
It has been exactly one month since I moved to Oxford, ''that sweet city with dreaming spires'', to quote the poet and critic Matthew Arnold.

As I find myself wandering through the leaf-strewn streets and hallowed halls of this revered city and university, I can't help but feel like an alien, a stranger in a strange land.

The grandeur of this place and the opportunities afforded me here constantly surprise and overwhelm me.

Every Monday evening I have a seminar on Shakespeare, led by a highly respected academic, in T.E Lawrence's old bedroom at Jesus College. My favourite watering hole is the Eagle and Child, the site of so many treasured meetings between C.S Lewis and J.R.R Tolkien. Just last week, Hillary Clinton popped over and had dinner with a few of my friends. Life here is supremely odd.

I am continually being told that I must be finding it incredible studying in a place so deeply steeped in history and culture. And I am continually impressed by the beauty and grandeur of Oxford. But I believe it's foolish to adhere to such an exclusively Eurocentric perspective.

By idolising these bastions of the British empire at the expense of our own homes, universities, cities and libraries, we miss out on so much. I may be studying in the same halls as 27 British prime ministers, 50 Nobel Prize winners and my own literary heroes, Vera Brittain and C.S. Lewis, but at home in Otago University, I walked in the steps of James K. Baxter, and studied under the glorious paintings of Ralph Hotere.

I never know what to wear, or how to tie my tie. Navigating the silver lines of cutlery at formal dinners is a battle in itself, and I am consistently late to meetings and classes because I find myself lost among the austere grey buildings. My accent also takes many students by surprise.

I've lost count of the number of times I've had to repeat myself, and to be honest I feel like a country bumpkin surrounded by my poised, received-pronunciation classmates. But, for once in my life, I don't have to worry about paying my rent, and I live on more than $2 noodles.

Despite being only three weeks into our degrees, my fellow scholars and I are already being headhunted by illustrious companies and banks such as McKinsey Consultants, the Boston Consulting Group, the Oxford University Press and JP Morgan.

I shouldn't be surprised by this - it's how the rich stay on top. The Guardian revealed in October that 82% of offers from Oxford in 2015 went to British students from the top two socio-economic groups. The wealth of opportunities afforded to students here in Oxbridge enable the elite to become even more elite.

A private education and a degree from Oxford or Cambridge are essentially a golden ticket to the top. Some colleges here may be more progressive and relaxed than others, but it seems to me that the majority of Oxbridge colleges are still bastions of entrenched privilege.

And we should care about this because it's the students at our top universities who end up running the world. Less than 1% of the adult population in the UK have attended Oxford or Cambridge, but these two old institutions have produced the majority of the nation's prime ministers, civil servants, senior judges and media barons. How can we hope for fair and accurate representation when the same people are continually elected?

But in little old New Zealand, we all have equal opportunities, right? Despite the myth of New Zealand being a beautiful egalitarian country, it's becoming increasingly obvious that our educational system is one deeply entrenched by class divide. Last month, journalist Kirsty Johnson wrote an insightful, in-depth piece on the gap between rich and poor in New Zealand's universities.

According to Johnston, data shows that only ''6% of those accepted into the elite university courses of law, medicine and engineering come from our most disadvantaged homes. Meanwhile, more than half the entrants are from families on the top three tiers of the income ladder. In simple terms, poor are outnumbered by the rich 10 to one''.

Oxford, Cambridge and indeed all universities across New Zealand need to seriously consider a more centralised admissions system, one focused on fairness and equality. Perhaps Oxbridge and its New Zealand equivalents could better employ experienced professors to go out to underrepresented and disadvantaged areas of the country to find the most talented and promising students, regardless of their socioeconomic background.

Otherwise the same students are going to be propelled to greater heights, and the gap between those who can afford a university education and those who cannot will never bridged.

I don't really have the answers to this problem. But I know I don't want to become desensitised to this divide, to become complacent in the wealth and privilege I find myself surrounded by. I know that going to Oxford will change my life.

I am already witnessing firsthand the confidence, poise and sense of entitlement that accompanies that blessed combination of wealth, status and private education enjoyed by so many students here. But will never forget my humble roots, my messy, loving family and the cheap noodles that we lived on when I was growing up.

-Jean Balchin is an English student at the University of Otago, and was awarded a Rhodes Scholarship to study at Oxford University.