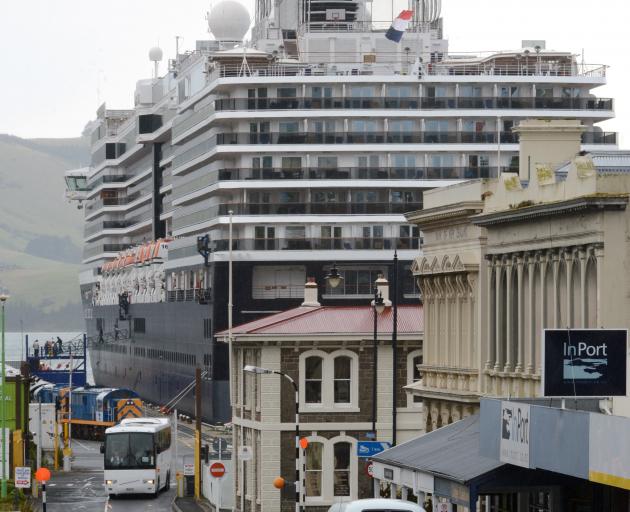 "Heritage buildings ... and dwarfed at the harbour's edge by the container terminal and its cruise ship guest, absurdly out of proportion.'' PHOTO: GERARD O'BRIEN
Tony Eyre revels in the charms of Port Chalmers.

From  my home in Vauxhall, a day hardly goes by when I am not captivated by the busyness of Dunedin's upper-harbour shipping lane. The frequent maritime visitors are the bulk carriers hoisting and loading endless stacks of logs at the Leith Wharf yard and lpg and oil tankers discharging gas and petroleum products at the oil jetty.

Just as fascinating are the majestic cruise ships like L'Austral and Caledonian Sky, which because of their much smaller draught can berth in Dunedin at the T/U sheds in the upper harbour, instead of Port Chalmers.

But the real action, of course, has been at Port Chalmers during this ongoing cruise ship season, where the big glamour players like Emerald Princess, Celebrity Solstice and mega-ship Ovation of the Seas compete with container terminal gantry cranes and the truncated Observation Point to impose their towering presence over this little port town.

With every cruise ship arrival, when streams of shuttle buses whisk away hundreds of disembarking visitors to the attractions of the city, I often wonder how much economic spin-off the Port Chalmers' shopkeepers receive from these dawn-to-dusk forays by high seas holiday-makers.

I suspect there will be good days and bad days, like any retail activity, depending on weather, the buying patterns of visitors or the number of stragglers happy enough to wander up and down the port's main street to browse rather than spending all day in the city.

Even if pickings may be lean, I get the impression that Port Chalmers' retailers are a pretty resilient bunch, pragmatic enough not to buy into a cargo-cult mentality that would expect a boomtown bonanza from all this cruise ship razzmatazz.

Despite the drop in the number of small businesses in recent years, my impression - as a relative outsider but keen visitor - is that Port, with all its charm and character, can look forward to an exciting future as more visitors make it a destination stop.

On a recent visit I found the main street buzzing, helped by the delayed sailing of one of the regular cruise ships. As you come over the gentle rise of George St, the view down to the port captivates with its multicoloured heritage buildings, some with higgledy-piggledy street verandas, and dwarfed at the harbour's edge by the container terminal and its cruise ship guest, absurdly out of proportion.

The local laundrette, takeaways, pharmacy, dairy, hotels and ATM provide life's essentials for the locals. Throw in your cafes, gift, fashion and jewellery outlets, art spaces and a second-hand bookshop and you have the makings of an interesting, if not vibrant, commercial hub. Not all businesses will prove viable but I detect a growing confidence in retail activity like the recent opening of a sushi bar and a gelateria for sorbet and gelato fans.

A window table view in one of the main street cafes soon jolts me into what makes Port Chalmers so unique. The constant rumbling of container and logging trucks heading past to the terminal and Back Beach reminds me this is a working port with an industrial edginess that is very much part of the character of the place.

As I wander down to the container terminal, the mandatory restricted access sign at the gatehouse entrance sternly warns me that there will be no ``messing about in boats'' like the days before regulated health and safety. The wharves can be dangerous places. As a young boy, my father used to love playing on the wharf of a coastal timber town despite the prohibition of his mill manager father. Caught and rebuked, he took his medicine.

``If you want to hang about here, you'd better learn to swim,'' warned his father - and pushed him off the wharf.

Not wanting to suffer a similar fate at the container wharf, I checked out the Maritime Museum in the old stone Post Office. Upstairs there is a large viewing window to allow visitors a little insight into the workings of the port. This is where straddle cranes rule, menacingly wheeling their weight around like the alien machines of War of the Worlds.

And if you have limited knowledge of Port Chalmers' past, then this quite remarkable maritime museum is packed to the gunwales with shipping ephemera. Display boards on the mezzanine floor trace the history of the port as a gateway to the goldfields, its ship and boat building legacy and the construction of the harbour mole and container terminal.

Port Chalmers certainly has a lot going for it and I get a sense that community-minded locals will want to enhance the town's potential in a way that doesn't detract from its special character and heritage. Events that attract visitors, like the seafood festival (which returns this year), are a great showcase for the port. But for me the sleeping giant is the proposed Dunedin to Port Chalmers cycle-walkway. It may not be hurtling down West Harbour at the pace of a Wild West railroad, but it will come. And when it comes, what better destination than Port?

Tony Eyre is a Dunedin writer.