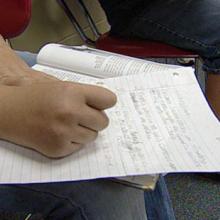 In  the culmination of a four-year battle, parent Jeff McClintock sought permission to bring an appeal to the Supreme Court of New Zealand in October. His case contested the right of his child's school to hold Christian religious instruction classes during the school day, in the light of the Bill of Rights Act which protects freedom of religion and belief. It was dismissed on grounds of there being no ``matter of public importance'' at stake or ``any appearance of a miscarriage of justice'' if the appeal were not granted.

The legislation upon which current practices are based is 52 years old.

The issue of religion in education has long been ducked by government and by most educationalists. But immigration has brought a great increase in religious diversity - particularly to New Zealand's cities where the majority of children live.

Here's the problem. The Churches Education Commission (CEC) has a legal right to promote Christian beliefs in state primary schools under Section 78 of the 1964 Education Act, if boards of trustees are agreeable. Legislators in the early 1960s rightly assumed religious instruction by church volunteers would meet the approval of the vast majority of parents. At a time when about 90% of the population affiliated to Christianity, Bible in Schools had ``social legitimacy''. It met a social need. It is much harder to make a case for the social legitimacy of Christian instruction in state schools today.

In order to reconcile religious instruction with the secular education system established by the 1877 Education Act, the idea of school closure was introduced into this legislation. At any time of the school day a classroom could be deemed to be legally ``closed'' (while actually open) for religious instruction. This arguably has had at least two unforeseen and unintended consequences. Firstly, the separation of religion from the secular curriculum appears to prevent young people in state schools from learning about religions and beliefs.

Teachers and principals interviewed felt the subject of religion was ``best avoided'' by class teachers, in case of inadvertent indoctrination or causing offence. Some felt the subject was taboo, illegal, or irrelevant in a secular school.

Few made the distinction between religious instruction into a belief, and religious education about a variety of religious world-views. This distinction had not been made clear during teachers' training or professional development. This means young people are not being given the opportunity to develop religious literacy: they learn to tolerate but not to understand the diverse beliefs making up New Zealand society.

Secondly, that the school was legally closed for Bible in Schools appeared, to a large degree, to allow educationalists to sidestep responsibility for monitoring CEC programmes and resources.

Representatives at the ministry and the NZEI stated they could not be held responsible for an activity outside the curriculum. Some teachers and principals argued they had no responsibility to provide information to parents about Bible in Schools because the school was closed for that lesson.

Because the programme is outside the curriculum, the Education Review Office does not check that parents are consulted frequently or that programmes are appropriate.

Constraints surrounding informed consent, opting-out and complaint processes for parents are numerous. Contrary to the judges' statement in the McClintock case, my PhD research argues these are issues of public importance and matters of justice are at stake.

It appears religion in state primary schools has been insulated from international developments in religious education. From the 1960s, educationalists in many other plural liberal democracies have been developing appropriate ways to teach about religious diversity at every age of schooling. Immigration policy in New Zealand has created a religiously plural society. Education policy and practice does not adequately reflect this. It's time for a review of legislation and practice and a debate about religions and beliefs as part of the curriculum.

Helen Bradstock recently completed a PhD at the University of Otago titled "Let's talk about Something Else: Religion and Governmentality in New Zealand's State Primary Schools".

In the old Social Studies curriculum, religion was observed as cultural tradition. Thus, India had sacred cows, 'which deplete the already insufficient food supply', we were taught. Films about Egypt showed the muezzin call to prayer. If a muezzin pops up now, does the teacher say 'Ignore that, moving on to the bazaar in Cairo'?. Religious studies have a place in Social Studies.

In today's society, many people are making a positive choice to be non-religious and there is now a strong cultural dimension to that way of thinking. What is missing from religious education is the presentation of the philosophy views and culture of those that reject religion presented as a positive aspect of NZ culture. If education is to reflect our society then the work of modern day atheist and humanist thinkers should take a primary position.
The subjecting of children to teaching that treats rejection of religion as a negative, along with the segregation of children on the basis of parents beliefs sets the scene for discrimination, not education.

The elephant in the room is that there is a rich and positive non-religious culture developing in NZ, and yet our RI education system is set up to obstruct its development and instead introduce views that are antagonistic and discriminatory toward the morality and culture of those that reject religion. Education should reflect our culture.

I think the most appalling thing about Bible in Schools is that the Ministry of Education were given a legal opinion from their own legal team in 2001 informing them that RI Classes are a form of direct discrimination with no defence under the Human Rights Act 1993. However, neither the MOE nor the Human Rights Commission have done a thing about this. You can read the original document at the link below. It took 2 years to get it released from the MOE without having the relevant sections blacked out. http://religiouseducation.co.nz/ministry-knew-bible-classes-discriminate...