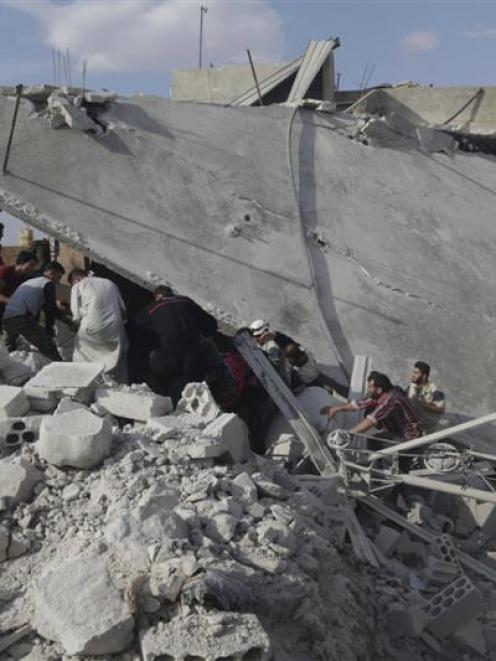 Civil defence members and civilians search for survivors under the rubble of a site hit by what activists said were cluster bombs dropped by Russian air force planes in Maasran town, Syria on Wednesday. Photo by Reuters.
It's more than a week since the Russians began their airstrikes in Syria, and the others that have already been bombing there for over a year, the United States and some other Nato countries, are working themselves up into a rage about it.

The Russians are not bombing the right people, they are killing civilians, they are reckless, dangerous and just plain evil.

A statement last weekend by Nato's 28 members warned of ''the extreme danger of such irresponsible behaviour'' and urged Russia ''to cease and desist''.

When a Russian warplane attacking Islamist targets in northwestern Syria strayed across the frontier into Turkey for a few minutes, US Secretary of State John Kerry said that the Turks would have been within their rights to shoot it down.

The weather was poor, the target was close to the border and the Russians apologised afterwards, but Nato Secretary-general Jens Stoltenberg said that the incursion ''does not look like an accident''.

So what does he think the motive was, then?

Russian pilots are getting bored, and are having a competition to see who can stay in Turkish airspace longest without getting shot down?

And the wicked Russians are killing civilians with their bombs, we are told.

Yes, of course they are.

So is the American-led coalition with its bombs.

Unless you are fighting at sea or in the open desert, there will always be civilians in the same area as the ''legitimate'' targets.

It's particularly unbecoming for the United States to act holier-than-thou about the use of Russian air power in Syria, when it is simultaneously trying to explain why American planes bombed a hospital in Afghanistan last month and killed 22 civilians.

Neither Americans nor Russians gain anything by killing civilians.

It's just an inevitable by-product of bombing.

But the biggest Western complaint is that the Russians are bombing the wrong people.

Contrary to American and European assertions, they are indeed bombing the ''right'' people, the troops of Islamic State that Western air forces have been bombing for the past year.

But the Russians are also bombing the troops of the Nusra Front and Ahrar al-Sham.

They might even bomb the troops of the Free Syrian Army, if they could find any.

This brings us to the heart of the matter.

Western propaganda makes a systematic distinction between Islamic State (bad) and the ''opposition'' forces (all the other groups).

The problem is that there is really little difference between them: they all want to overthrow the Syrian regime, and they are all Islamist jihadis except for the tattered remnants of the Free Syrian Army.

The Nusra Front was created in 2012 as the Syrian branch of Isis (now Islamic State), and broke away early last year in a dispute over tactics and turf.

It is now the Syrian branch of al Qaeda.

Ahrar al-Sham was also founded by an al Qaeda member, and is a close military and political ally of Nusra.

And until the propaganda needs of the moment changed, even the United States admitted that the ''moderate'' elements of the Syrian opposition had collapsed.

There are no reliable statistics on this, but a good guess would be that 35% of the rebel troops confronting Mr Assad's regime belong to Islamic State, 35% to the Nusra Front, 20% to Ahrar al-Sham and 10% odds and sods including the Free Syrian Army.

In other words, at least 90% of the armed opposition are Islamists, and probably no more than 5% are secular, pro-democratic groups.

There are not three alternatives in Syria.

There are only two: either Bashar al-Assad's regime survives, or the Islamists take over.

Really serious Islamists, who hate democracy, behead people and plan to overthrow all the other Arab governments before they set out to conquer the rest of the world.

They are probably being a bit over-optimistic there, but they would be seriously dangerous people if they commanded the resources of the Syrian state, and they would be a calamity for Syrians who are not Sunni Muslims.

The Russians have accepted this reality, decided that it is in their own interests for Mr Assad to survive, and are acting accordingly.

The United States and its allies, by contrast, are hamstrung by their previous insistence that Mr Assad must go on human rights grounds.

They cannot change their tune now without losing face, so they don't bomb Mr Assad themselves, but they persist in the fantasy that some other force can be created in Syria that will defeat both Mr Assad and Islamic State.

Moreover, the leaders of America's two most important allies in the Muslim world, Turkey and Saudi Arabia, are determined that Mr Assad should go (mainly because he is Shia, and they are Sunnis), and they would be very angry if the US helped him survive.

That, plus American anger at Russia over Ukraine and lingering hostility from the old Cold War, is why Nato is condemning the Russian intervention in Syria so vehemently.

But it is all humbug and hypocrisy.