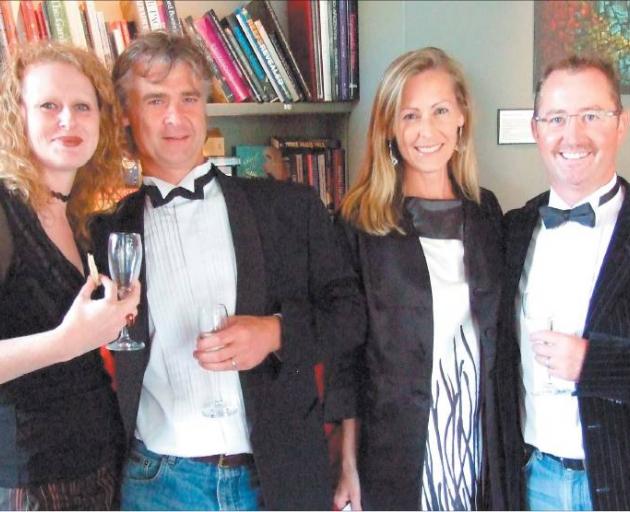 Black tie: Queenstown couple Sarah Martin and John Shawyer (left) and Arrowtown couple Meg and Michael Thomas get into the spirit of things at the awards night.

John Key and the Flag Consideration Panel have got the silver fern wrong, writes David Ellison, of Karitane.

It is disheartening to watch the flag debate. What could have been a well-informed and creative process where historians and experts lead the discussion has descended into a celebrity-driven fad-fest.

John Key has gone about the Flag Consideration Process the wrong way. A nation's flag must endure the generations, not just the latest unscientific poll or media trend. Instead of a discussion about our proud history and icons, it has been about John Key's legacy.

What hasn't helped is the position of the Labour Party and the RSA. Their absence from any constructive debate has surrendered the microphone to John Key sycophants and social media viral hysteria.

What we have ended up with are four poor flag designs of little resonance, resilience, or relevance.

Andrew Little is the first Labour leader to be against changing the flag. Effectively, he has undone the work of his predecessors - the foundation set by wartime prime minister Peter Fraser.

Following the war, historian Dr John Beaglehole designed the New Zealand War Service Medal, using the national colours black and white from the huia feather for the ribbon. Peter Fraser insisted the silver fern on the medal be similar to Thomas Ellison's design for the original All Black uniform.

Thomas Ellison, my ancestor, was one of the first Maori lawyers. He was a member of the New Zealand Native rugby football team to tour Britain in 1888-89. Their uniform was a black jersey with a silver fern on the chest.

Thomas was instrumental in the New Zealand Rugby Football Union adopting the silver fern on all black uniforms. Thomas also wrote several coaching books which cemented our style of rugby in our culture.

Central to Thomas' silver fern design was accentuating the silver fern's unique features while avoiding any resemblance with a white feather the symbol of cowardice.

To botanists in the Victorian era, a pressed silver fern was sought-after for its silver underside and its three proportionate divisions, or pinnates. A silver fern reflected the moonlight, providing guidance through the dark. This is why the silver fern appears white on a black background.

The white-tipped black huia feather is a symbol of mana and respect that leaders wore in their hair. The silver fern and huia feather synergise to form our national symbol and colour.

Unfortunately, these fundamentals have been overlooked.

Dave Clark's redesign of the All Black silver fern in the 1980s bears no botanical resemblance to a silver fern and instead features the biological design of a white feather.

Today, the silver fern has been stylised into extinction.

None of the final four flag designs for the referendum feature a silver fern. Two feature a globally generic two-divisional plant fern while a third features a sprig of acacia.

The silver fern is our laurel leaf and appears on all cap badges, coats of arms, war graves, and many medals. Weeks after 238,000 New Zealand War Service Medals were awarded in 1946, New Zealand's war service earned our independence from Britain. The symbols of that medal were unifying and symbolic of nationhood.

I was a teacher in Canada in the 1960s when they changed their flag. Nigeria had already adopted a green, white, green paled flag in 1960. Upon my return, I remember many Labour politicians in New Zealand suggesting that New Zealand adopt a similar styled flag to Canada and Nigeria but featuring a silver fern on a black background flanked by white pales.

Norman Kirk, Matiu Rata, David Lange, Russell Marshall, Sir Geoffrey Palmer and Jonathan Hunt are a few who have supported a flag change to a silver fern on black. Even Jenny Shipley supported a white silver fern on a black background, along the lines of the Canadian maple leaf flag.

John Key originally favoured Mrs Shipley's stance but has changed his position twice according to his fickle internal polling.

There was only one flag design submitted to the Flag Consideration Panel that encapsulates the spirit of the New Zealand War Service Medal and the aspirations of the aforementioned politicians.

It is called the Black & Silver, it is well researched, well designed, and many top designers, vexillologists, historians, botanists, and iwi have endorsed it. I have become the flag's kaitiaki (guardian).

It doesn't surprise me the Flag Consideration Panel overlooked it. That panel's decisions are so contaminated by John Key's social media campaigning that none of the four designs resonate with our past or our future.

The only organisation that can restore some respectability to the flag consideration process is the Labour Party. They can use their position on the cross-party flag committee to present the Black & Silver to replace one of the four flag designs for the referendum.

Canada's special flag committee did exactly what I am suggesting. Canada's current flag was suggested by an expert who was initially overshadowed by the hype and hysteria for other mish-mash designs.

It was the opposition who ensured that the current Canadian flag was adopted unanimously.

The flag process here was meant to be unifying. Instead, the apathy among the majority has given undue influence to some misinformed attention seekers in the minority.

Let's ensure that we choose a unique flag design using the only enduring symbol and colour we have that has served us well in the past. The Black & Silver is 100% us.