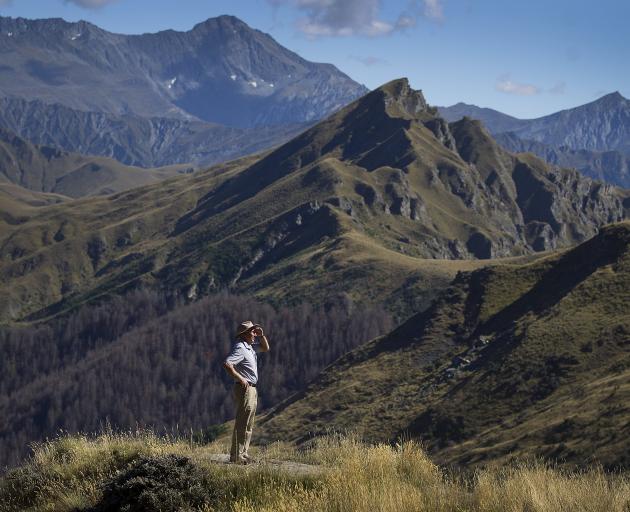 "The poorest man may in his cottage bid defiance to all the forces of the Crown. It may be frail, its roof may shake, the wind may enter, the rain may enter but the King of England cannot enter — nor all his forces dare cross the threshold of the ruined tenement." — William Pitt the elder, 1763.

Two hundred and fifty years later we still have people in New Zealand (politicians and the botanical puritans) who simply do not understand the importance of that statement on the rights of the common man or women to hold property against the Crown and all its forces.

The recent controversy over significant natural areas has erupted over the identification of unmodified Maori land in Northland. The use rights to vast areas of private land have been identified for political seizure and effectively removed from private control. Most reasonable people assumed that Maori land rights were finally recognised as belonging to, and the property of, various iwi and individuals who wish little more than to exercise their rights to their land just as the rest of us do, or thought we could do.

In the 1980s, properties on the Old Man Range in Otago had up to 50% of the farms identified for "protection" (see destocked). It is therefore distressing to read in the Otago Daily Times of a misleading account of a concept that was once a welcomed initiative among landowners who had preserved tussock, bush or forest remnants so well that the eco-puritans considered these areas as "the best of what remains" and in desperate need of state control. Most landowners still embrace the conservation ethos only to find their efforts were never to be troubled by a principled and ethical approach from captured officialdom and beyond.

The result was to cause significant stress to landowners who deeply resented their effort and foresight to preserve remaining areas of natural vegetation were treated with such disdain by the significant natural areas (SNA) programme.

It has never been explained how absentee (de facto) landlords such as the government or councils can ensure better outcomes on the newly identified SNAs by devaluing them to the point of becoming real liabilities to the landowner. The eco-puritans are of course fully entitled to deceive themselves as to the benefits of state command and control. They are not entitled to deceive the country.

The botanical survey of private land was instigated in 1983.

A technical advisory group set out an administrative and operational structure to administer what was to become known as the protected natural area (PNA) programme.

The chairman of the National Parks and Reserves Authority wrote in a preface to the advisory group’s report that "... it is of paramount importance that a scientifically sound, and administratively efficient and socially acceptable PNA programme is in place, ready to be implemented by agencies involved, especially Doc". It was further stated that only through negotiation between the Crown and the landowner were "recommended areas for protection" (RAPs) to become PNAs.

Guidelines for Doc advocacy under the Resource Management Act say "access for surveys already undertaken were given on the understanding that there would be negotiation, not compulsion over the protection of areas identified".

That never happened. The good faith which was evident in the beginnings of this conservation initiative was soon to be shredded. Farmers discovered there was an ulterior motive for this discovery work. The RMA was on its way in 1991 requiring identification of flora on private property. Doc’s own paper to itself contained guidelines on advocacy under the future RMA had identified the PNA programme as a source of tension. It is therefore little wonder that the SNA programme has, and still does, meet with such vociferous condemnation as the norms of social and legal requirement are cast aside by those who were determined to add to the massive amount of conservation of land (well over 33% of New Zealand’s land mass) already under some protective covenant or Government control.

The article by RNZ (ODT, June 23) simply threw petrol on to this simmering fire of anguish by offering up the botanical purist point of view as espoused by the Forest & Bird and the Environmental Defence Society and other environmental advocates. Such spokespeople appear to define other people’s property as communal in ownership but singular in liability.

Rather strangely, no environmental organisations or advocates appear to have ever purchased or offered up into state control any land that they personally or collectively owned for conservation. Nor, curiously enough, was it mentioned in the article that private landowners line up to protect environmental values in a QEII Trust covenant to the extent that that trust can barely cope with their requests.

State control of the environment and its fragile successes can reasonably be compared to the failures of so much of state control from the RMA to mental health (Lake Alice) to a housing crisis to literacy rates.

Why is it that all great works of New Zealand art are not owned and "protected" by the State as they are also treasured by society? It is not that long ago that crowdfunding purchased a private beachfront for the benefit of the public, yet that example is never followed in the botanical world.

Some years ago, in another life in Wellington, this writer was informed (anonymously) that an "extinct" bird still existed on an area of private property.

The owner was worried about the property being sanitised by government officials. The then minister of conservation would give no assurance that would not happen so the bird remains officially extinct. This story was told sometime later at a meeting as an example of how not to save the species. A person later identified themselves as the anonymous landowner, so the story is totally true.

Sometimes the people need to protect our country from our government.

Really? Mr Eckhoff has a very simplistic view of the Crown's right to acquire land and is being somewhat misleading by suggesting that William Pitt's words from 250 years ago have any relevance in the modern world.
The reality is that the Crown, even in Pitt's day, owned all of the land. Especially in NZ, the Crown's right to acquire land has always been enshrined in law. Yes the process that the Crown needs to go through has become more complex, especially in the last 40 years or so, but ultimately if the Crown wants your piece of dirt, for whatever reason, it can acquire it.
As to who is better to manage any piece of land for the purposes of conservation I would put my faith in the Crown, or more precisely the Crown agents DOC, than I would put in in the hands of high country farmers. All the available evidence points to high country farmers being exploiters with scant regard to conservation in any way shape or form. They like their low county cousins, the dairy farmers have been responsible for the decimation of our natural environment.
Despite his captivating yarn about an un-named extinct bird I would not trust farmers to provide for the security of our high country land

Low County is not Silverpeaks.

Read Mr Eckhoff for his way of putting a case.