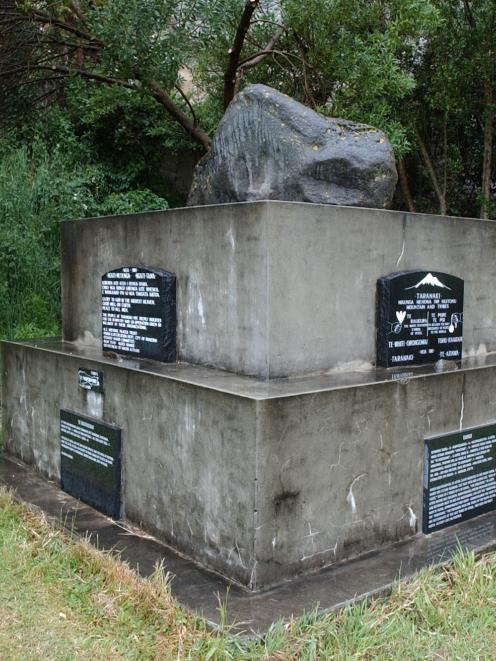 The memorial near the caves in Portsmouth Dr with which 19th century Maori "political" prisoners were associated, but not where they were held. Photo by Jane Dawber.
The stories of the Maori political prisoners in the 19th century in Dunedin have far greater depth and are far more interesting in reality than in the myths, writes Bill Dacker.

AT first, I was delighted to see the ODT giving space in the Play section (4.8.12) to the documentary Tatarakihi, which follows a journey of the children from Te Kura Kaupapa mo Tamarongo in the south Taranaki town of Opunake, to Christchurch and Dunedin.

They were following the course of a history in which their ancestors were unjustly imprisoned in Hokitika, Christchurch and Dunedin.

In Dunedin they were forced to work on the infrastructure of the city and harbour.

But then I was dismayed to see myths being perpetuated about the period they spent in Dunedin.

The documentary itself does not do so.

Corrections of these myths have been made in print (including the ODT) and in exhibitions and in interviews.

Again I would like the following facts to be clearly stated: There were four groups of Maori political prisoners held in Dunedin in the 19th century.

They were all held mostly in the Dunedin prison of the day, which was brutal in the sense that all 19th century prisons were brutal.

These were the men of Pakakohe, a hapu of Ngati Ruanui of South Taranaki, the district of present day Patea.

Their stay was the longest and their suffering the greatest, as 18 died. These were the prisoners who built at least half of the Andersons Bay causeway and who were associated with the caves there.

They worked on roads and other infrastructure projects in the city itself.

They were held in the Dunedin Prison when not working; the caves probably only used as a sort of worksite office/prison during the building of the causeway.

Though this group is also likely to include ancestors of some of the children in the film, they were definitely not from Parihaka.

The second, a group of four, were from the east coast of the North Island. Little is known about them except they were held here between the times of the larger Taranaki groups.

They were all released.

The third were the Parihaka ploughmen, followers of Te Whiti o Rongomai and Tohu Kakahi of Parihaka. They were a part of an attempt, which began at Opunake, to resist the unjust confiscations of land through civil disobedience.

These men were also mostly held in the prison though some spent periods in a prison hulk (a boat converted into a floating prison) when they worked on the walls retaining roads around the harbour.

Three of these men died.

For at least one of these prisoners, and most likely as many as three or four, this was their second period of unjust incarceration in Dunedin, for many Maori from South Taranaki were drawn to Parihaka to support the efforts of Te Whiti and Tohu.

Finally, there was Te Whiti o Rongomai and Tohu Kakahi themselves.

In the winter of 1882, they were held for a couple of weeks in the Universal Hotel in Central Dunedin during their banishment in the South as the Government persisted in trying to crush their movement of passive resistance.

There are no records of any Maori political prisoners being held in Dunedin for as long as 19 years, as stated, though one of the Pakakohe group did choose to stay in Dunedin after his relations left but in the Dunedin hospital, not the prison, and he chose to return to Taranaki with the Parihaka ploughmen.

Dunedin has been enriched over recent years by the additions of three memorials to these men and their efforts for justice, one in the Southern Cemetery, one in the Northern Cemetery and one by the caves.

Their stories and the way in which they reflect our shared history have far greater depth and are far more interesting in reality than in the myths.

They did suffer but the way they carried themselves through that unjust imprisonment and forced labour impressed the local population and did much to counter the negative racist stereotypes of the day. At one point the citizens of Dunedin demanded that their council give the first group of prisoners some cash payment on their release to acknowledge the work they had done in the city, and at another point led to a crowd of locals farewelling at the Dunedin wharf the ship carrying them home, with a resounding three cheers.

The return of the children of Opunake in this film is also a cause to cheer.

The journeys between Taranaki and Dunedin continue but today they are part of attempts to understand our past and honour those who upheld the cause of justice in the face of the determined attempts to ensure the vested interests of the powerful crushed it and them.

Their story should be an inspiration to us all today, as well as to their descendants.

The truths of their story are far greater than the myths.

• Bill Dacker is an historian who lives in Port Chalmers and Beaumont.