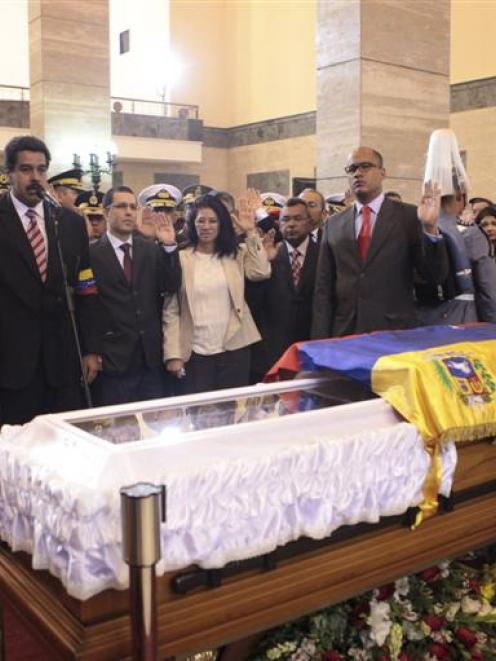 Acting Venezuelan President Nicolas Maduro swears an oath before the coffin of late Venezuelan president Hugo Chavez during his funeral at the military academy in Caracas at the weekend. Photo from Reuters.
''The graveyards are full of indispensable men,'' said Georges Clemenceau, the prime minster of France during World War 1, and promptly died to prove his point. He was duly replaced, and France was just fine without him. The same goes for Hugo Chavez and Venezuela.

''Comandante Presidente'' Chavez' death last Wednesday came as no surprise. He was clearly coming home to die when he returned from his last bout of surgery in Cuba in December, and since then everybody in politics in Venezuela has been pondering their post-Chavez strategies.

But none of them really knows what will happen in the election that will be held by the end of April, let alone what happens afterwards.

Venezuela never stopped being a democracy despite 14 years of Mr Chavez' rule. He didn't seize power. He didn't even rig elections, though he used the Government's money and privileged access to the media to good effect. He was elected president four times, the first three with increasing majorities - but the last time, in 2012, he fell back sharply, only defeating his rival by 54% to 44%.

That is certainly not a wide enough margin to guarantee that his appointed successor, Nicolas Maduro, will win the next election. Mr Maduro will doubtless benefit from a certain sympathy vote, but that effect may be outweighed by the fact that Mr Chavez is no longer there in person to work his electoral magic.

If his United Socialist Party of Venezuela (PSUV) were to lose that election, it would not be a tragedy. Mr Chavez was an unnecessarily combative and polarising politician and a truly awful administrator, but he has actually achieved what he went into politics for.

Twenty years ago, Venezuelan politics was a corrupt game fought out between two factions of a narrow elite. Now, the task of using the country's oil wealth to improve the lives of the poor majority is central to all political debate in the country.

In last year's election, the Venezuelan opposition parties managed to unite behind a single presidential candidate, Henrique Capriles, whose political platform was basically ''Chavismo'' without the demagoguery.

In previous elections, the opposition had railed against Mr Chavez' ''socialism'' and Marxism, and lost by a wide margin. Mr Capriles, by contrast, promised to retain most of Mr Chavez' social welfare policies, and lost very narrowly.

Over the past dozen years Mr Chavez' governments have poured almost $US300 billion ($NZ364 billion) into improving literacy, extending high school education, creating a modern, universally accessible health-care system, building housing for the homeless, and subsidising household purchases from groceries to appliances. What made that possible was not ''socialism'', but Venezuela's huge oil revenues.

Mr Capriles had to promise to maintain these policies because the poor - and most Venezuelans are still poor - won't vote for a candidate who would end all that. He just said that he would spend that money more effectively, with less corruption, and a lot of people believed him. It would not be hard to be more efficient than Mr Chavez' slapdash administration.

Venezuela today has the fairest distribution of wealth in the Americas, with the obvious exception of Canada. Venezuela's ''Gini coefficient'', which measures the wealth gap between the rich and the poor, is 0.39, whereas the United States is 0.45 and Brazil, even after 10 years of reforming left-wing governments, is still 0.52 (a lower score means less inequality of income).

For all of Mr Chavez' ranting about class struggle and his admiration for Fidel Castro, this was not achieved in Venezuela by taking money from the rich and giving it to the poor. It was accomplished by spending the oil revenue differently. He changed the political psychology of the country, and it now has the potential to be a Saudi Arabia with democracy.

That is not a bad thing to be, and the Venezuelan opposition has finally grasped that fact. It remains for Mr Chavez' own party to understand that it has actually won the war, and to stop refighting the old battles. A spell in opposition might help it to come to terms with its proper role in the new Venezuelan political consensus: no longer an embattled ''revolutionary'' movement, but the more radical alternative in a more or less egalitarian democracy.

This will be hard for the PSUV to do, because the people around Mr Chavez are still addicted to the rhetoric and the mindset of ''struggle'' against the forces of evil that they see on every side. Nicolas Maduro, for example, could not resist claiming that Mr Chavez' cancer had been induced by foul play by Venezuela's enemies when he announced the leader's death.

One day, Mr Maduro promised, a ''scientific commission'' would investigate whether Mr Chavez' illness was brought about by what he called an enemy attack, presumably by the United States. Ridiculous, paranoid stuff, and it shows just how far the PSUV has to travel to take its proper place in a modern, democratic Venezuela. But the journey has begun, and it will probably get there in the end.