We should be helping our neighbours in struggles for survival 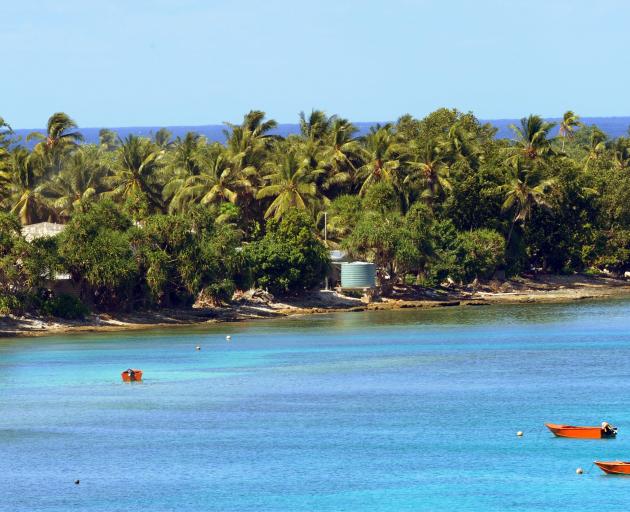 The tiny, independent nation of Tuvalu is sinking into the ocean. PHOTO: ODT FILES
It is time to see nations like Tuvalu as our neighbour and start acting accordingly, writes Peter Matheson.

Some of the most interesting and moving reflections on the recent COP26 conference in Glasgow have come from our Pacific Island neighbours.

One of the few Pacific delegates who could make the long trip to wintry Glasgow was Maina Talia, from Tuvalu. His tiny, independent nation of 10,000 people, which sits on the equator, is literally sinking into the ocean, battered by king tides and cyclones.Its fresh water wells are compromised and the struggle to cultivate its traditional crops becomes harder each year. Buildings and even the graves of the ancestors are being swept away with each successive cyclone.

However, its people remain remarkably resilient and determined.

Some have, over the years, moved to Australia and New Zealand, and Maina himself is currently a postgraduate student in Sydney, but like most of his people he has no intention of becoming a climate refugee. He intends to return to Tuvalu and fight for the survival of his beloved nation and its culture.

At Glasgow, he was a powerful advocate for realistic steps to combat global warming and the acidification of the oceans, which already has had deleterious effects on the fishing which is so crucial for Tuvalu’s food security.

With representatives from the Marshalls, Kiribati and other Pacific nations he not only made the case at the formal sessions for the phasing out of fossil fuels and for compensatory financing for what developing nations have suffered at the hands of the developed world but he helped to run what he called "side-events". These asked the awkward question, not least of the renitent Australian Prime Minister: "Are you not our neighbour?". He is well aware of the geopolitical significance of the Pacific, as China and the United States contend for primacy.

However, as a theologian he also has an unusual take on the ecological crisis. Tuvalu’s people are Christian, devoted to a Bible which promises, in the Noah story, that there will never again be a devastating flood. Yet the evidence is overwhelming that the opposite is the case. Their nation is being steadily inundated. "Where is God in all this?", is the natural response.

Maina is emphatic, therefore, that the missionary reading of scripture has to be challenged and replaced. The life and death struggle for survival for Pacific nations like Tuvalu can only be understood, he argues, if we realise that currently it is the affluent Western nations which are in the ark. Although it is their market-oriented, profit-seeking culture which has caused this crisis, they are sitting pretty in an ark of security, while those whose resources they have exploited flounder in the deep.

The emergence of the Delta and Omicron mutations of Covid-19 has been alerting us to the folly of imagining that the affluent world can live in a relatively trouble-free medical ark while the developing world struggles to access not only the vaccines but the health infrastructure it needs to survive. Global interdependence is a lesson that is painfully being rammed home to us. This is even more true of global warming and its concomitants. Unless and until we can see nations like Tuvalu as our neighbour and act accordingly we are, as they say, "in for it". Their life and death struggle will be ours.

It would be an incredible miracle if we woke up to this. But then, miracles do happen. Let’s pray for one!

Waiting for the West is cargo cultism. If China offers assistance, take it. No geopolitics in a foxhole.

The text of the Bible actually reads: Genesis 9:11 "Thus I establish My covenant with you: Never again shall all flesh be cut off by the waters of the flood; never again shall there be a flood to destroy the earth.”
No promise of no flooding whatever. No mention of climate change or sea level rise. No the good doctor has moved beyond the text to try to make it seem false. Why do that if you want to honour God?

OT honouring is beside the point. Free will enables human endeavour to protect country and people. A fine fix we'd be in if checking scripture before acting on immediate crises.

"compensatory financing for what developing nations have suffered at the hands of the developed world"
That's a very negative, Marxist, view of the world
The developed world has bestowed many blessings on Tuvalu !
Compare its population growth with the USA and NZ
In 1960 it was 5,321; USA 180.7m; NZ 2.372m
In 2020 it was 11,655; USA 329.5m; NZ 5.379m
Increase in 60 years was x2.19; USA x1.82; NZ x2.27
Could this population increase also be a factor in the "deleterious effects on the fishing which is so crucial for Tuvalu's food security" and not just CO2 emissions
What has allowed Tuvalu to thrive like this ?
Modern;- medicine, plumbing, imported foods, machinery, building supplies, communications, technology, fossil fuels ???
Financed by global markets ;- "Domestic fishing in Tuvalu is quite small compared to the activities of foreign fleets in Tuvalu waters. The tuna catches of the foreign fleets are very large and the money generated from access fees is a critically important source of government revenue" (https://www.fao.org/fishery/docs/DOCUMENT/fcp/en/FI_CP_TV.pdf)
This article smacks of victimhood, projected guilt and disingenuous opportunism !

European presence in the Pacific did not smack of exploitation, but of invasion, violence and epidemic. They're being inundated. STFU and help.