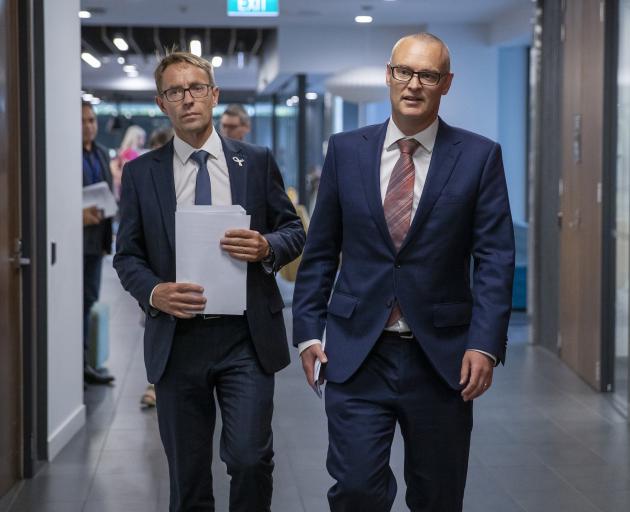 Director-general of health Ashley Bloomfield and then-health minister David Clark arrive at the Ministry of Health in Wellington to present an update to the media on the response to Covid-19 in February.
Dunedin North MP David Clark is far too magnanimous a man to indulge in schadenfreude, but the former Health Minister could be forgiven for cracking a wry smile after the troubling week his successor has had.

Dr Clark’s departure from the health hot seat was long foreshadowed, his being on borrowed time following breaches of Covid-19 lockdown regulations.

However, there had also been public perception, fuelled by political commentators, that because he was not in Wellington during the Alert Level 4 crisis - Dr Clark, like all other Labour MPs, had been told to remain in his electorate - that the former minister had been sidelined.

That negative perception was not helped when Dr Clark said his lead civil servant, director-general of health Ashley Bloomfield, had taken responsibility for operational issues with quarantine regulations - while a dismayed-looking Dr Bloomfield was standing beside him.

Dr Clark’s comments at the time were widely seen as an abdication of responsibility, but they also reflected what a succession of health ministers have discovered - their ministry is monolithic, change-averse and sometimes downright mulish at responding to directives.

Dr Clark was speaking at a time when the director-general was perceived by many as being incapable of doing wrong - not a claim Dr Bloomfield would ever make on his own behalf.

That aura dimmed somewhat this week with the revelation that Covid-19 testing systems which Dr Clark and Prime Minister Jacinda Ardern thought had been introduced weeks ago were still not up to speed, leaving the new minister, Chris Hipkins, to say he "owned the mistake".

Mr Hipkins and Ms Ardern were careful to try not to dump the blame on Dr Bloomfield for "systemic issues" which meant policy announcements had not been translated into reality, but they and Dr Clark before them were entitled to believe the accuracy of information supplied to them by ministry staff.

This is not the first time what the public was told and what was happening at the health coal face were not in alignment - the troubled rollout of this year’s influenza vaccine is another example.

While questions from some journalists about whether Dr Bloomfield should resign were a step far too far - the director-general absolutely must remain at his post during the current emergency, and he has generally shown exemplary leadership - that is not to say that any public servant is above scrutiny.

The public, and their elected representatives, are entitled to know that the best health response possible is being marshalled for their protection, and that everything is being done to prevent the Auckland cluster blooming into something akin to the situation besetting Melbourne.

Dr Bloomfield’s explanation of there being a "dissonance" between the Government’s belief of what was happening regarding the testing of border staff and how many tests were actually being carried out is not sufficient, and the Opposition - although slightly fraught at times - has been right to question the seeming inaction in this area.

While some will say New Zealand’s Covid-19 problem is infinitesimal compared with other countries, that plea for perspective misses the point - it is still a problem, it must still be dealt with, and the at times laboured machinery of the Ministry of Health needs to be full steam ahead at combating the virus.

Mr Hipkins, who showed considerable poise when he started out as health minister, has now discovered what Dr Clark and his predecessors quickly found out - the job is not at all an easy one.

Now that we are not voting on September 19, Waitaki independent candidate Daniel Shand is making other plans for the former election date.

"I’d like to cordially invite Jacqui Dean, MP of the National Party, to a friendly debate on how the public of the district can be more accurately represented," he writes.

Given that Mr Shand proposes the debate be held at the Cardrona Hotel and that it start at 10.30am, it might well be a very friendly discussion indeed by mid-afternoon.

"I’d like to state the loser of the debate buys the drinks and remind her to bring her wallet," a confident Mr Shand said.

No longer employed as a minister and with his election campaign - like most others - suspended, David Clark obviously has plenty of time to keep up with his correspondence.

On Thursday, Dr Clark posted on his Facebook page that morning’s ODT article about the Ministry of Health having bought all the land needed for the main buildings to build the new Dunedin Hospital.

Soon after, someone posted a question about whether climate change had been considered when choosing the inner city, sea level site, and 60 seconds later Dr Clark had posted a response that as a former climate change minister, project chairman Pete Hodgson had most assuredly thought about exactly that issue.

Green Party Taieri candidate Scott Willis this week posted a photo on Facebook of a newly erected billboard near Middlemarch - only to be questioned about the environmental impact his placard might have.

Mr Willis replied that four small holes in the ground were "exceptionally low impact" and that the sign and frame would be recycled for the 2023 election.