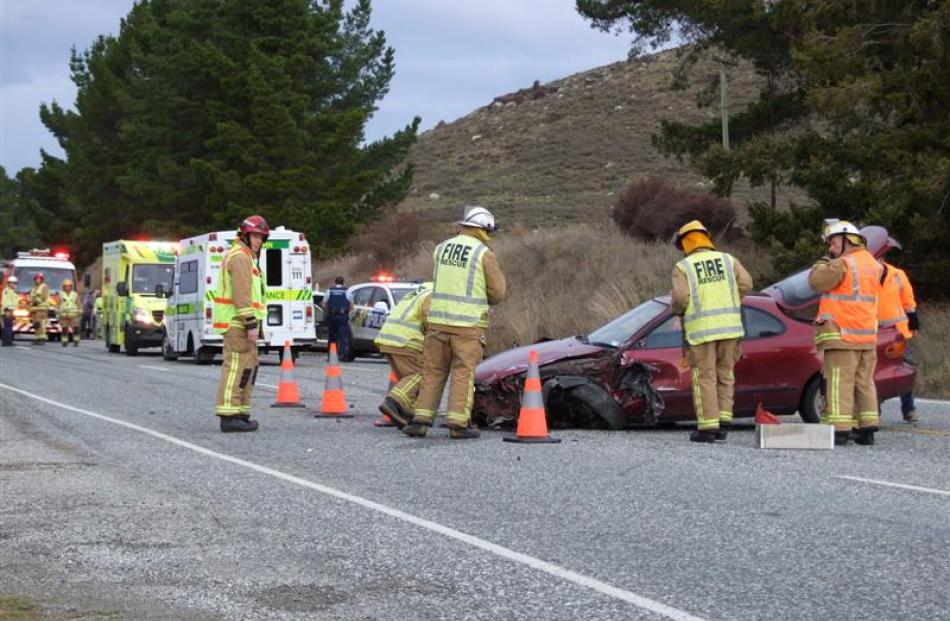 Emergency services at the scene of a crash near Shingle Creek in 2015. Photo: ODT
An accident could be caused by the poor condition of the state highway at Shingle Creek, a Central Otago district councillor believes.

Roxburgh ward councillor Stephen Jeffery told the council's roading committee last week that if the area of significant slumping near Shingle Creek was not fixed "it will cause an accident''.

The slumping, between Roxburgh and Alexandra on State Highway 8, was particularly dangerous for small, light cars which were often "thrown about a bit'' when they hit the slumping, several councillors said.

Roading committee chairman Dr Barrie Wills had raised the issue of state highway conditions during his chairman's report and said Central Otago roads and the Pigroot were "quite appalling in many places''.

Some road repairs on the Pigroot [State Highway 85] were "as rough as guts'', Dr Wills said.

He was also concerned about exposed emulsion on some patches of highway, which caused glare and slippery conditions during rain; axle rutting and broken seal from heavy trucks on State Highways 8 and 85; the slumping at Shingle Creek; other slumping at Chatto Creek; and the quality of emulsion used these days seeming to be not as good as that used previously.

"It's [road conditions] getting to the point where it's a health and safety issue.''

Maniototo Cr Stu Duncan said he was also concerned about a lot of seal breakage on road edges, and potholes that were being "patched up''.

Ranfurly residents had also been upset about some recent road sealing, when the tar leaked and people walking on it were then tracking the tar through their homes and other buildings.

Dr Wills, who is a member of the Otago Regional Transport Committee, said he was talking to the NZ Transport Agency (NZTA) about the various roading concerns.

"Our maintenance contract manager and Aspiring Highways team are planning to meet with him, as the CODC roading committee chair, and with CODC roading staff to discuss their concerns around maintenance of the local state highway network. Given the discussion at this week's CODC meeting, we would also propose to issue a media statement on these concerns and our approach to these matters following this meeting. We would like this meeting to take place as soon as possible, aiming for next week.''