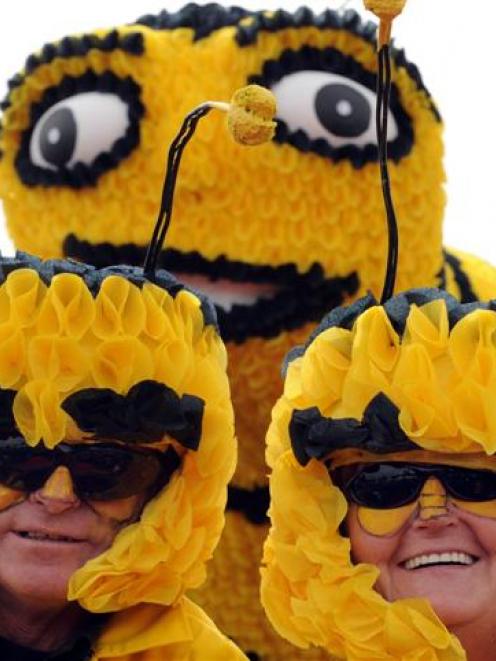 Keith and Ann Nicholl on the Alexandra Fire Brigade's winning float in the 2008 blossom festival. Photo by Stephen Jaquiery.
Continuing with the Saturday night concert would bankrupt the Alexandra Blossom Festival, the festival committee's annual meeting was told last night.

"That's about $63,000 less cash we have on hand to work with, which means we'll have to manage our money more carefully this year," he said.

The festival's new event manager, Annetta Latham, of Christchurch, said Alexandra's festival was the oldest in New Zealand and the town could justly be proud of it "Our aim is to financially get it back on track and go back to its roots. The classic thing that happens [on the main Saturday] is that you fill the [Pioneer] park up with people during the day and then you kick them out and try to fill it up again that night.

"The harsh reality is that we'll bankrupt this festival if we try to maintain that concert."

Mrs Latham said the festival was a unique mix of A and P show, combined with a Christmas parade and "all sorts of other events".

"What we have to do now is go back to the festival roots and do what you do well and regrow this festival from a solid foundation."

Erica-Jayne Tipene resigned from the committee but the remainder of the 2008 committee was re-elected.