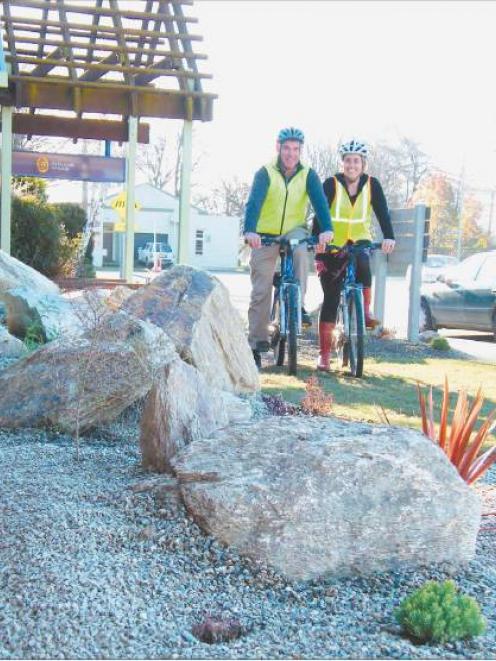 
Two bicycles were added to the council vehicle fleet more than a year ago and made available to all staff for short-distance travel. The bicycles are in constant use, with one clocking up 180km of travel and the other one topping 300km.

Waste minimisation officer Sophie Mander is one of the staff who enjoys the different mode of transport.

‘‘I use a bike to get to local meetings and for other short journeys around the town, '' Ms Mander said.

‘‘Travelling by bike often has advantages over other forms of transport. For example, if I'm investigating the illegal dumping of rubbish, it's often easier to get to the location by bike than by vehicle.''

One of those sessions focused on travel, Ms Mander said.

‘‘Rather than condemning the use of private motor vehicles, this session engages people in a debate about values, provides information about using our motor vehicles more efficiently and promotes alternatives to car use.''

‘‘What better place could there be for cycling than in Central Otago?'' Mr Sole said.

It had bought smaller, fuel-efficient vehicles into the car fleet as needed.

‘‘There's also a greater emphasis on car pooling and we're trialling teleconferencing at community board meetings to avoid [having] multiple cars travelling to meetings,'' he said.

‘‘We also encourage staff to be careful about their use of council vehicles, to be responsible about the expenditure of public funds.''

The council had looked at buying hybrid vehicles, but had not bought any yet. Its six-monthly fuel bill had gone up from $8743 for January to June 2006, to $9229 for January to May this year. June figures were not yet available. Fuel spending had only risen 5.5 per cent since 2006, which showed the council had made considerable fuel savings in that time, he said.

‘‘It is clear that council has reduced the amount of fuel used substantially, given the fuel cost increase is substantially higher than the 5.5 per cent increase incurred [by the council] over the past two and a-half years.

‘‘That is equivalent to 2.2 per cent per annum - lower than the rate of inflation,'' Mr Cooney said.