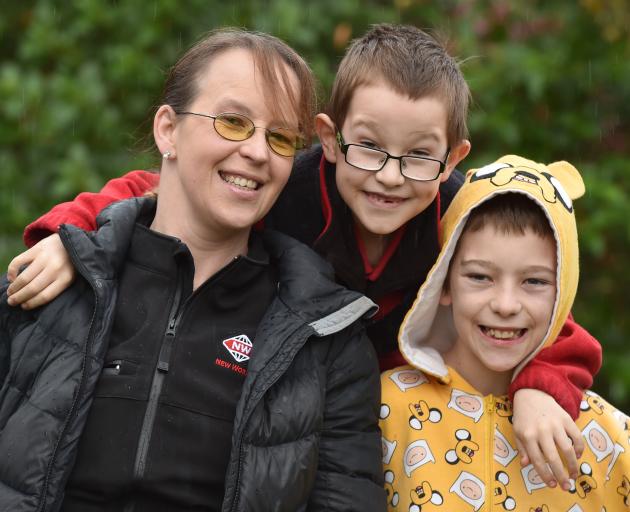 After three trips to the Stand children's services village in Roxburgh, Annette Churchill and her sons Daniel Dustow (8) and Braith Dustow (13), of Dunedin, wish it did not have to close. PHOTO: PETER MCINTOSH
The mother of a child who has been to the Roxburgh Stand Children's Services village three times is "absolutely gutted" about its closure.

Annette Churchill's two sons, Braith and Daniel Dustow, both have ADHD and Braith has high-functioning autism.

Braith attended the Roxburgh village three times in the past six years and his mother wanted to take him back before high school.

She wanted to refer Daniel there too, as he might be autistic.

"Basic things that is normal common sense to us, he doesn't understand. For us, we automatically wash our hands after using the toilet but he's like `why should I?'."

Miss Churchill said Stand helped Braith immensely with his social skills and helped her and her partner manage the children.

Braith's first stint at the camp was for six weeks.

"It was his first ever stay away from home. He's never ever stayed at anybody's house, he's never been away from me. It was great for Dad and me to have time away."

Miss Churchill lived at the village for Braith's first week in that time, watching Braith from afar and taking daily parenting courses.

"It was good to be able to stand back and see how he reacted to different situations and people without me ... because kids always act differently around their parents."

Before hearing of the closure, she wanted to take Braith back.

"He was going to go with some more help with his social cues, especially coming into high school next year."

Since theclosure, she had been struggling to see a way forward.

Braith did have the option of respite hours and care, where he could go for a weekend monthly.

The family had used Strengthening Families, which they were planning to visit again, and the Health Care New Zealand Explore Specialist Advice programme.

But Stand provide something no other organisation could, Miss Churchill said.

"It's the residential treatment where parents can go as well as the kids . . . I'm sure there's other children who are worse off that desperately need the like of Stand."

Even if they could get into the Christchurch village, Miss Churchill said they could not afford the trip up there.

Following yesterday's announcement in the Otago Daily Times that Stand would look at reinstating the service in the region in two years, Miss Churchill said it would be "awesome" to bring it back.

But she thought the wait was too long.

"Children over here have been due to go over the next few months and now they're going to have to potentially wait another year or two years when they could really be using the help now.

"At times, not getting the help can be a huge difference in how they learn."