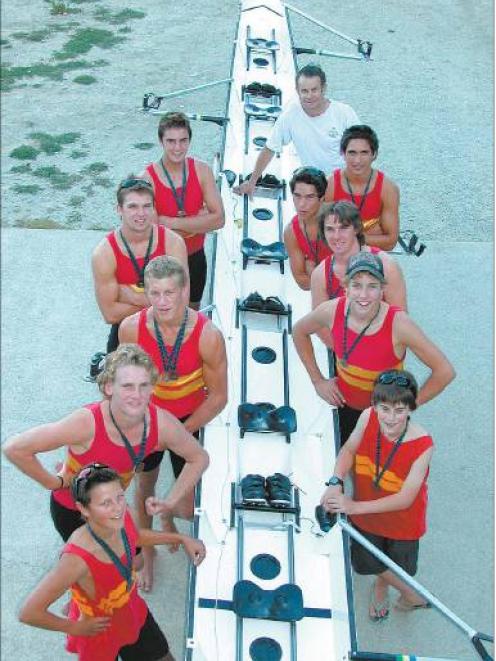 
Silver and bronze medals are already in their clutches after their efforts at the recent South Island secondary schools championship and the squad has one more chance to win a gold.

Eleven competitors from Dunstan High School will head to the national secondary schools rowing championship - the Maadi Cup, which begins on Monday on Lake Ruataniwha, near Twizel.

Coach Quentin Annan said Anna Price will compete in the under-17 and under-18 singles, while Blair van der Voort, Andy Brun, Jayden Spence, Luke Robinson, Matt Te Tana, Dillon Teneti, Jared Lewis and Kurt Checketts will row in the under-18 eight and the under-17 fours and eight. Coxswains Alex Fisher and Matt Anderson complete the squad.

‘‘Last year we brought home a gold, so it would be nice to win the four again and get at least second with our eight,'' Mr Annan said.

The crew made up of van der Voort, Brun, Spence and Robinson won gold in the under-16 fours event at last year's nationals and the same boys won silver in the under-17 fours at the recent South Island secondary schools regatta.

The eight won bronze at the same regatta.

‘‘Now all we need is a gold to complete the set,'' Mr Annan said.

The crew trained on the water every night, with the exception of Fridays, and had been working hard since October.

This was likely to be the last season for the boys' crew, as some members were in their final year of high school.

Christ's College was likely to provide the strongest competition at the nationals, Mr Annan said.
Later this year, the Dunstan eight team will compete in the world's largest two-day rowing event - the Head of the Charles regatta in the United States. The team has to raise about $35,000 for the Boston event, which attracts 7500 competitors and 300,000 spectators from throughout the world.