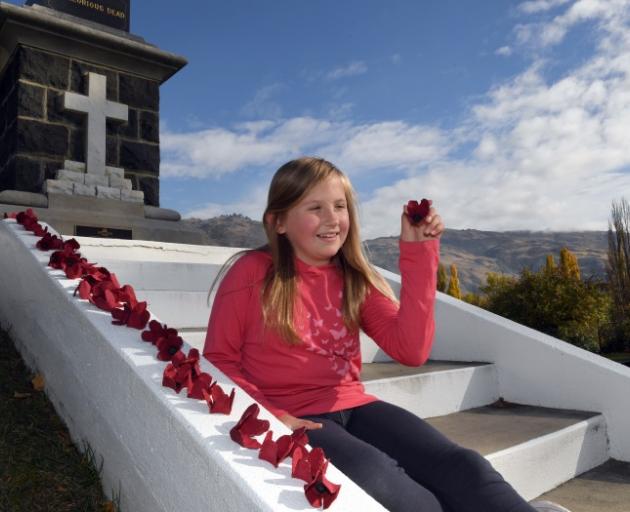 Egg-cellent idea ... Jody Velenski decorates the Clyde war memorial with some of the poppies she and her mother have crafted from egg cartons during lockdown. PHOTO: STEPHEN JAQUIERY
Covid-19 will not dampen the Anzac or philanthropic spirit of a Clyde youngster determined that this year’s fight against the pandemic will not overshadow the battles of the past.

Nine-year-old Jody Velenski mobilised to provide a stopgap measure after this year’s Anzac poppy appeal was put on hold.

She joins a host of people across Otago and Southland determined not to let this year’s commemorations slide, from those decorating their homes with hand-crafted poppies, to those resolved to stand in their driveways at 6am on Anzac Day this Saturday as part of the nationwide ‘‘Stand at Dawn’’ event.

Her mother, Kristy Velenski said she and her daughter had been crafting poppies from egg cartons in lockdown, taking the individual egg cups and painting them to represent the petals and pistil (centre) of the traditional Anzac poppy and distributing them from Clyde’s Dunstan Motors.

‘‘During the lockdown we managed to accumulate a lot of egg cartons for some reason.’’

The solution to deal with them came from YouTube, Mrs Velenski said.

‘‘I thought it was sad the annual poppy appeal would not go ahead and initially I was going to make a wreath, but Jody was keen as.’’

As soon as her daughter understood there was potential to raise funds for the RSA, her interest was piqued and she began working furiously.

‘‘There were blisters involved in this process.’’

Since her daughter began distributing them, people had snapped them up to make wreaths to lay at the township’s war memorial, Mrs Velenski said.

The work had been a chance to educate her daughter about the significance of Anzac Day and the poppy in particular.

‘‘She had been to Anzac services with her grandmother but she is now getting to the age where she understands why she is is being pulled out of bed at the crack of dawn without a tantrum.’’

Jody said the lockdown had ‘‘been boring’’ and she saw an opportunity.

‘‘My favourite part about making the poppies was making them with Mum and seeing we were getting money from donations.

Jody has since planned to widen her distribution to include Clyde Four Square.