Pumped up over regional petrol prices 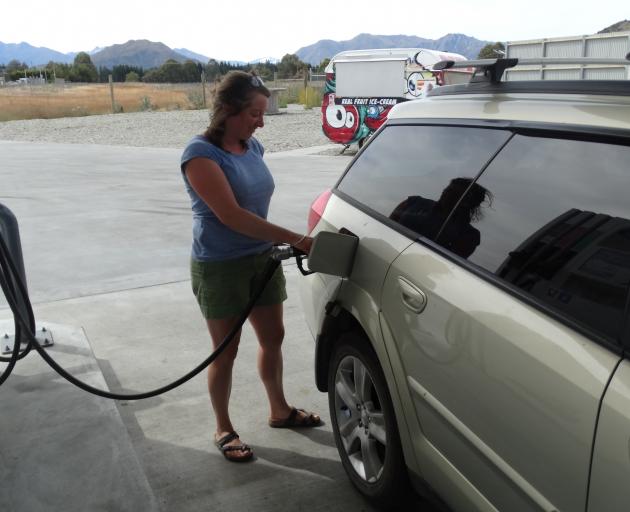 Rebecca Kirby-Crowe takes advantage of cheaper fuel at the McKeown fuel station in Wanaka. Photo by Kerrie Waterworth.
Regional differences in the price of fuel across Otago have left some motorists scratching their heads.

A survey of the price of 91-octane fuel at service stations in Otago yesterday found prices ranged from 205.9c to 220.9c per litre.

Wanaka had the highest prices in the region, closely followed by Queenstown and Frankton while Dunedin, Alexandra, Cromwell, Ranfurly, Oamaru and Balclutha all enjoyed the lowest prices.

North Otago motorists looking to save more than a few cents could cross provincial lines and travel to Glenavy in South Canterbury and pay only 190.9c per litre at Allied Petroleum.

Even customers loyal to one brand could expect to pay more as they travelled across the region with a 15c difference between the BP service stations in Wanaka and Cromwell.

People who filled their vehicle with 91-octane at the Wanaka BP and Wanaka Caltex service stations yesterday were charged 220.9c a litre.

At the Cromwell BP service station, the same fuel cost 205.9c a litre.

Prices were independently set based on various factors, including the cost of the product, shipping costs, exchange rates, delivery costs, taxes and local operating costs.

All the factors combined meant there could be price differences even in areas which were geographically close, she said.

Automobile Association senior policy analyst Mark Stockdale said location was only one factor considered when the price of fuel was set.

Population base was also a factor. While Wanaka and Queenstown had a large number of tourists they had relatively small numbers of permanent residents compared with Dunedin and Invercargill.

Less straightforward was the price difference between Cromwell and Wanaka as both had a similar location and populations.

One reason could be the large number of vehicles which passed through Cromwell each day, Mr Stockdale said.

''Wanaka is a bit of a cul-de-sac, where in Cromwell you have a large amount of traffic heading not only to Queenstown and Wanaka but also into Central Otago and on to Dunedin.''

Customers at both the BP and Caltex stations in Wanaka yesterday said while they understood fuel cost more in the town, they were confused about why it was so much higher than in Cromwell, 30 minutes away.

However, even in Wanaka, cheaper fuel could be found just a short drive from the main street.

The price of 91-octane at the self-service McKeown Cardfuel 24/7 in Ballantyne Rd was 205.9c a litre yesterday.

Neverthesless, the forecourts at both the BP and Caltex stations were busy with motorists.

Business had been better than expected since the service station opened at the end of July, he said.

''We always knew Wanaka was a place that we would do well in but I would say it's been good sooner than we expected.''

French tourists Francois Aminot and Matilde Fouquet said locals had told them about the cheaper fuel at the McKeown station.

Not being able to use cash at the self-service station would be one of the reasons why tourists would still fill up at the BP and Caltex, Mr Aminot said.

''They drive into town and they see the signs they know and they go there . . . And you can pay by cash so it is much easier,'' he said.

How soon we forget that the law used to prevent oil companys owning petrol stations in order to block monopolies. There were hundreds of privately owned petrol stations around NZ each offering up to five different petrol brands. Oil companys canvassed Government to change the law to allow oil company ownership - and the National Government duly obliged. Now we have three oil companys owning virtually all petrol outlets in NZ as monopolies. Private ownership and real competition has gone. And petrol stations have become quasi-coffee shops thus cutting into other private business. And lastly, forecourt service has also gone as has price reduction for self-service. Well done National !!!