Rainfall great for farmers, not for orchardists 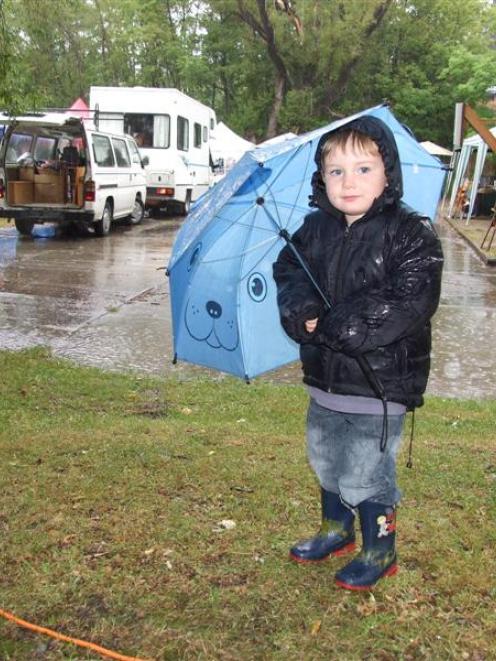 Duncan Fulcher (3), of Becks, was at the St Bathans Village Fete yesterday and, although the event was washed out during the afternoon, locals were happy to see the rain. Photo by Lynda Van Kempen.
Steady rain in Central Otago yesterday was greeted by farmers and fire authorities as a godsend, but cherry growers were less impressed.

It was the first significant rain since mid-May, Maniototo farmers said, and they were in celebration mode.

"This is a godsend like you wouldn't believe, because we were desperate," Oturehua farmer Ken Gillespie said.

He started feeding grain to the stock on his property a week ago.

In the 24 hours until mid-afternoon yesterday, his property had received 23mm of rain.

"In two or three weeks, that will just transform this barren ground. Just when you think we're really in trouble, Mother Nature provides. She does test us at times, though."

Otago's showers were nothing compared with the West Coast, where 82.4mm fell on Hokitika.

While rain lifted the levels of the Taieri River, which was removed from low-level alert by the Otago Regional Council at the weekend, inflows were not enough to remove the Shag and Kakanui Rivers from that status.

The St Bathans Village Fete was washed out yesterday afternoon, but organiser Vicki Ryalls, the president of Cambrian St Bathans Rural Woman, said there were no complaints.

"It's been so dry we really need this rain, so there's people everywhere with big smiles on their faces,"she said.

The cherry harvest is at its peak now and orchardists had helicopters out in force yesterday hovering over the trees in an attempt to dry export crops.

Summerfruit New Zealand chairman and cherry grower Gary Bennetts, of Roxburgh, said it was difficult at this stage to gauge the extent of the rain damage to the crop.

Roxburgh, Earnscleugh and Cromwell had all received showers and the moisture could split the fruit, downgrading it.

"The timing couldn't be worse for us as, depending on the varieties grown, mostly we're at the peak of the harvest.

"As well as cracking the fruit, it affects everyone in the whole chain. The rain interrupts the pickers, they can't pick enough good quality fruit, so their wages are affected, the packers have to handle more fruit to get the quality they need, and so on."

Mr Bennetts said the rain was not "disastrous", but would damage the crop.

The only redeeming factor was that it was cold while it was raining, with blustery wind in between showers.

"It was a good shower and we'll take anything we can get when things are so dry. But let's not forget, we're not out of the woods yet by a long shot."

The total fire ban in Central Otago would remain in force, he said.