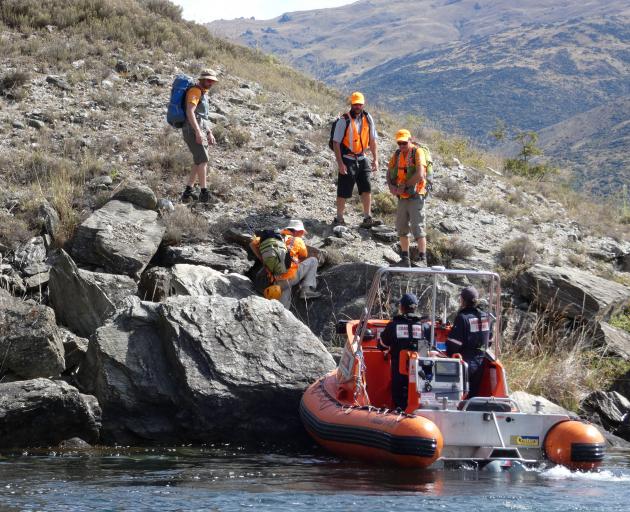 Detective Sergeant Derek Shaw delivered a stark message as he briefed emergency services taking part in a search and rescue exercise on Lake Dunstan on Saturday.

It was not a case of if, but when, injuries, medical events, or even deaths occurred on the trail.

"This is for when it goes wrong and it inevitably will."

About 30 personnel from Fire and Emergency New Zealand Cromwell and Clyde, Police, Clyde Coastguard, Central Otago Land Search and Rescue, and Otago Regional Council Harbourmaster Steve Rushbrook took part in the exercise which was launched from the opposite side of the lake to the trail, at Champagne Gully.

Specifically, that meant looking at how shared and specific agency communication channels worked around the trail — testing for communication black spots, as well as identifying potential landing spots on the lake shore near the trail.

A switchback eases a steep climb on the trail. Photo: STEPHEN JAQUIERY

Each agency worked independently on the trail on specific tasks to test how those channels of communication worked at an inter-agency level.

"We typically get about two fatalities on the rail trail per year, but it is quite easy to get parallel access. Much of it is close to a road.

"If something happens in the middle of the Dunstan trail you might have to go 10km either way."

While most emergencies on the track would probably be dealt with by helicopter, the exercise was to practise either for helicopter support, or in the event weather or availability precluded the use of one, Det Sgt Shaw said.

Several communications black spots were identified during the exercise and work would be undertaken to address those, he said.