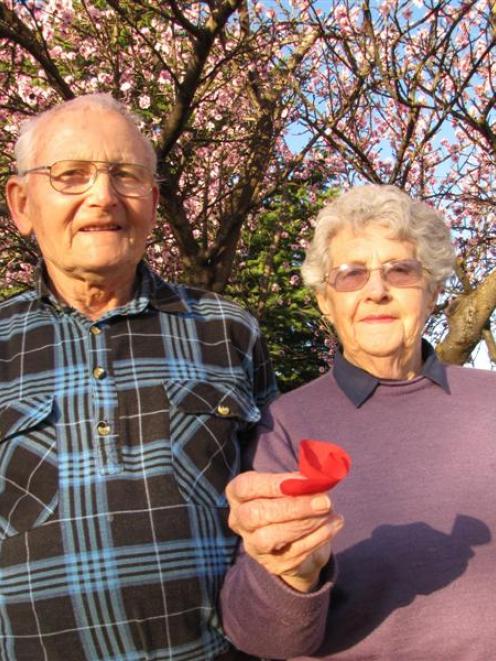 For the last 56 years Jan and Mary Belt, of Alexandra, have looked forward to the Alexandra Blossom Festival. Together they have worked on countless floats and made millions of crepe paper flowers to adorn them. Photo by Sarah Marquet.
With a twinkle in his eye, 86-year old Alexandra retiree Jan Belt flashes his hands at me to indicate the number of Blossom Festival floats he has worked on in the last 56 years.

''This many ... probably 30,'' he said in a thick Dutch accent while beaming from ear to ear, though I suspect it is quite a few more than that.

For the former New Zealand speed-skating champion who was attracted to the town by its crisp winters, spring is a special time of year. That is because it is when the Alexandra Blossom Festival is held..

After moving to the town in 1951, Mr Belt attended the first festival a few years later and was hooked.

The next year he helped build a float and has never looked back.

In 1967 he joined the Alexandra Lions Club and has helped construct its float each year, as well as helping with others.

Wife Mary (79), a member of the Dunstan Lions Club, has been by his side the whole time, making thousands of crepe paper flowers to adorn the floats.

But is not just float-building Mr Belt has been involved in. For about 30 years he helped cook and serve the Lions Club's whitebait patties. The couple are disappointed the festival parade is no longer as big as it used to be, but say it is still world-class.

They were in the United States in 1976 and happened to see a parade marking 200 years since the declaration of independence was signed but compared to the blossom festival parade, it was ''underwhelming'', he said.

This year they have been working on a Mt Everest-themed float to mark the 60th anniversary of the historic first climb by Sir Edmund Hillary and Sherpa Tenzing Norgay.

Although that was slightly fewer than last year, it was not disappointing because some organisations only entered floats every second year and this happened to be an ''off year''.

There would be about 40 items, including five pipe bands, in the parade on Saturday, September 28.

A new addition to the festival, now in its 57th year, would be fireworks. The Friday night Mardi Gras, usually held in Tarbert St, was this year going to be moved and combined with the Round the Clock Race, which begins at the Linger and Die area on Rivers St, and a fireworks display.

Early bird tickets for the main day, Saturday in the Park, will go on sale later this week.