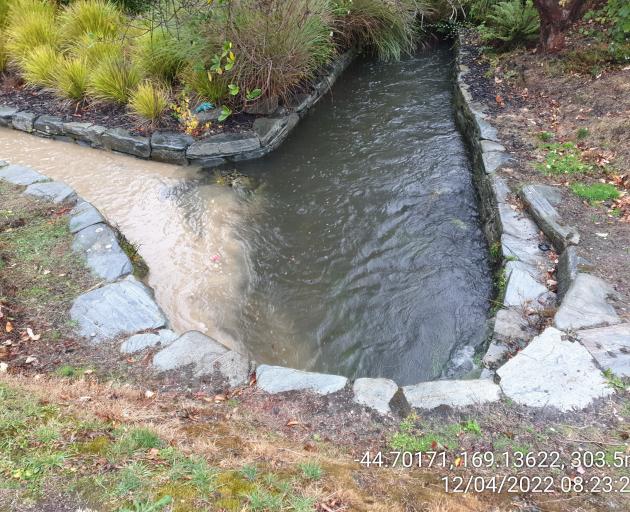 Silt escaped from Youghal St into Bullock Creek on April 12 during a 12mm rainfall. PHOTO: SUPPLIED/PAUL VAN KLINK/OTAGO FISH & GAME COUNCIL
Resource management laws should be amended to increase infringement fines for sediment discharges, as an incentive for property owners to do the right thing by Wanaka waterways, the Otago Fish & Game Council says.

The Otago Daily Times understands a Youghal St property owner has this week been fined by the Otago Regional Council, following a sediment discharge from stockpiled earth on April 12 into the much-loved town centre waterway.

Previously, the ORC imposed a $42,500 fine on Winton Ltd for sediment discharges from the Northlake subdivision into the Clutha River, and the fine was this year upheld by the Court of Appeal.

ORC regulatory and communications general manager Richard Saunders has declined to comment on enforcement action at Youghal St because a 15-day appeal period has not lapsed.

He confirmed an abatement notice had been served and the site was being regularly monitored.

The Queenstown Lakes District Council could also have done more to prevent the discharge in the first place, he said.

QLDC media adviser Sam White said the district council had reserved its position on enforcement action until after remediation was completed on the discharge site.

The QLDC had also issued an abatement notice and was also regularly monitoring the site, he said.

The spring-fed creek’s source is on Otago Fish & Game land in Stone St and it meanders for 3.5km through a mix of publicly and privately owned properties to its outlet near the Dinosaur Playground in Roys Bay.

Resource Management Act infringement fee regulations contain a schedule of fines from $300 to $1000.

Mr Quirey said that range should be compared to the cost of land development or the profit to landowners and businesses.

"An infringement fee is usually a fraction of those amounts.

"Looking at it that way, an infringement fee may be a poor incentive to avoid contravening the Resource Management Act," Mr Quirey said.

"The discharge looks like another case of too little, too late for our waterways.

"Larger infringement fees may help to send a clear message, so other landowners don’t try to do a similar thing."

The site has been cleaned up, but Mr Quirey said the damage was done.

"This is a spring creek unable to receive flushing flows to clean the sediment out.

"The impacts of this discharge will likely have long-lasting consequences," he said.

"Fish & Game suspects sediment discharges happen a lot more than we hear about.

"Overly permissive or vague rules relating to water can make it difficult to stop people discharging sediment to water.

"A good thing to do would be to ensure the soon-to-be-released land and water regional plan contains direct, strong rules about sediment discharge.

"Rules set in that plan should set the bar for how seriously people take sediment discharge for the coming decade or so," he said.