Cleaner water, but how? 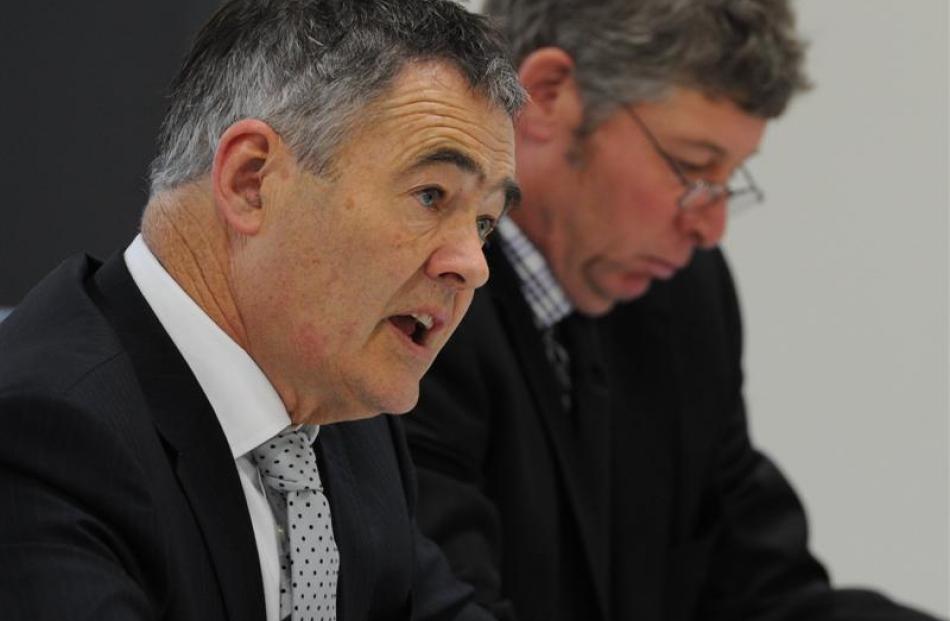 Being able to swim, drink and collect food from Otago's rivers and streams is a target everyone agrees with, but how that is achieved has been up for debate. Rebecca Fox takes a look at the varying views expressed during a month-long hearing into proposed regulations aimed at improving and maintaining water quality.

There was never any intention to put people out of business by trying to improve the region's water quality, water plan hearing panel chairman Duncan Butcher says.

From day one of the hearing Cr Butcher found himself defending and explaining the council's stance and intentions with proposed plan change 6A (water quality).

However, as the panel, including independent panel member and former Queenstown mayor Clive Geddes and Cr David Shepherd, was being told every day that the council's plans would wipe out farming and horticulture, return production to 1990 levels, close meatworks, end forestry, and endanger the jobs and livelihoods of thousands, maybe they were right to be defensive.

The council had done its best, they said, to devise a simple easily accessible plan which would allow rural landowners to continue to do what they wanted with their land with only one proviso - run-off had to meet standards that would enable the region to maintain and improve the quality of water in its rivers and lakes.

The response they got from the majority of submitters was: "Good on you, we won't argue with keeping the region's waterways clean, but ..."

Here came the crux: they simply could not understand how it would work.

There is no certainty, no detail, no guidelines to give those affected by the changes any idea of the day-to-day practicalities of meeting the standards and if they didn't, when the environment police would arrive?

Cr Butcher admitted there was not a "trigger level" in the plan explaining when landowners should be looking at the levels of nitrates.

"It was never intended to put people out of business," he told Oamaru farmers.

Some submitters could not see how the approach differed from any other, given most would not comply and need resource consents for their land use anyway.

One farmer told the panel he did not meet the 10kg limit despite not having used nitrogen on his farm for 25 years.

Mr Geddes advised against being concerned as there was provision for resource consent to be gained.

However, uncertainty was expressed again: would those farmers get consent?

The suggestion of using a modelling tool designed for the dairy industry to measure nitrogen run-off might be fine for that sector but it did not work for pastoral farming or horticulture, they said.

Those who designed the system told the panel it had limitations and would be more useful as a trend tool than an on-the-spot tool for enforcement and needed to be run by trained people rather than the average farmer.

Then came the oft-repeated phrases of how some of the plan failed to meet the intention of the National Policy Statement for Freshwater Management or the Resource Management Act.

That was repeated so often that towards the end of the hearing the panel suggested submitters skip over those bits as they had heard them all before.

Next came the repeated calls for the council to be more like other regional councils - most notably borrowing from the Horizons One Plan court decisions to back their arguments, one saying the regional council was operating in a "maverick way", another calling the rules "draconian".

Mayors attended to express concerns about what the plan change was going to mean for the region's city and towns, especially as the precursor to the long-anticipated 6B plan change.

"You can't pitch town and country against each other," their counsel, Phil Page, said.

While Dunedin Mayor Dave Cull warned that by the time the towns and cities realised it, the policies and standards applying to urban discharges would already be set.

"The city does not want to be put in the position of arguing for a special regime for urban discharges that it is more permissive than for rural non-point-source discharges."

This was despite Cr Butcher assuring them that there was no indication of what the rules for 6B would be.

The heads of the region's major industries had similar concerns as to what the future might bring.

The panel did not even get a pat on the back from the conservationists and environmentalists, as all had criticisms. For some, the plan did not go far enough, while for others it seemed to risk more pollution.

By the last days of the hearing, Cr Butcher was telling submitters the panel had got the message loud and clear that there needed to be some explanation and guidelines on how the new standards were going to be implemented.

Just how it would be included in the plan was a work in progress, not expected to be seen much before Christmas.

• Council director of resource planning Fraser McRae said when contacted as point-source discharge regulations were operating well under the present plan, the council was in no hurry to revisit those, so plan change 6B would be years away.

"All we were doing is flagging that in the future there would be another change to align both but it's not on our urgent work list."

Instead, the council would now concentrate on a new regional policy statement, a process likely to take about five years.

The plan
Proposed Water Plan Change 6A (water quality) Aims to maintain good water quality and improve it where necessary.

• Addresses non-point source discharges to water in rural areas.
• Targets ensure that water will be suitable for contact recreation, fishing, stock drinking water, and mahika kai (food collection).
• Removal of policy regarding the capacity of rivers to dilute contaminants.

• That have an obvious adverse effect on water quality.
• Where no practical steps are taken to avoid sediment runoff.
• To water from animal waste systems, silage storage, or a composting process.
• Will allow discharges that meet limits for nitrogen, phosphorus, E.coli, and sediment.
• Provide a limited option where consents may be available for discharges.
• Amend provisions for river and lake beds, and Regionally Significant Wetlands to:Control bed disturbance.
• Make it easier to construct single-span bridges and other crossings.
• Stop the use of rivers as regular stock crossings.