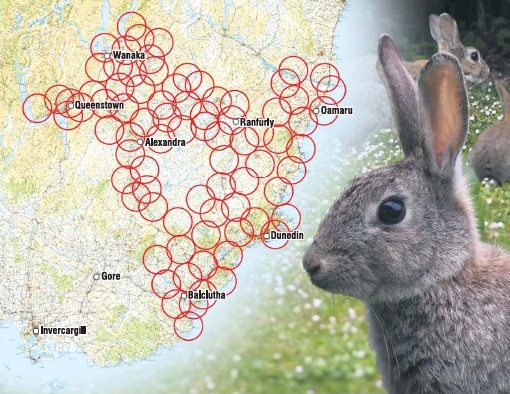 These overlapping circles indicate the expected distance the rabbit virus RHDV1 K5 will spread in Otago over the next two months. The gap in the middle is an area of higher altitude and with lower rabbit populations. Source: Otago Regional Council
Desperate farmers could be unintentionally sabotaging the release of the new strain of rabbit calicivirus in Otago.

Otago Regional Council chairman Stephen Woodhead said yesterday he did not want to point fingers, but he had heard "second-hand" that some landowners were attempting to remove carcasses of animals where the virus had been released.

And while "absolutely understandable", it was a report the council was taking "very, very seriously", as it could jeopardise plans to create a natural epidemic and knock back the pests' numbers by up to 40%.

"Even if it's well-meaning, the worst thing people can do is transport the carcasses and spread them themselves," he said.

"You're reducing the amount of virus available at that release site and slowing the natural spread of it down and then introducing a small amount of virus to a new site, which then raises a whole lot of concerns about not enough virus available at a new site, so potentially that could lead to some getting a sub-lethal dose and becoming immune - so it's really important it spreads naturally."

Landcare Research rabbit biocontrol initiative project leader Dr Janine Duckworth said while the virus was spread by rabbit-to-rabbit contact, the design of the virus release programme was based on carrion flies and blowflies spreading the virus.

The spacing between release sites of roughly 20km would be jeopardised "if people keep nicking people's bunnies".

The virus would be spread through the region through flies being "pushed around" in the wind, she said.

In Spain, the virus spread about 12km to 15km a month naturally; in Australia it could be spread up to 150km a month.

While it was likely a conservative estimate, the plan in place in Otago was based on flies carrying the virus 7km a month.

In three months, the virus was expected to cover at least 20km if it was well established at release sites.

Once the virus was established in an area, after four to six weeks, individuals moving carcasses could have a beneficial effect, but not at this stage, when the number of infected carcasses in an area had a "multiplying effect".

Otago Federated Farmers president Phill Hunt said if there was interference in the programme, "that would be very disappointing and that would be a case of landholders doing themselves a great disservice in the long term".

Infected rabbits die from multiple organ failure after two to four days but Mr MacLean said over the next six weeks the council should start to see the effects of the release and know whether the 40% goal was on track.

Yesterday, he could not confirm whether any rabbits had succumbed to the disease.

Dr Duckworth said infection by the K5 strain of the virus was established through tests after "a piece of liver the size of a grain of rice" was removed, to leave the carcass in place. 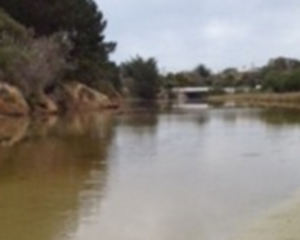 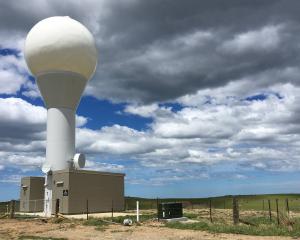 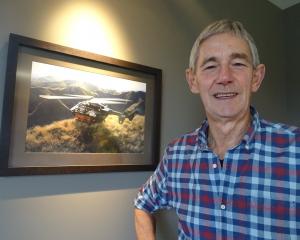 Be aware of danger on road, police warn