By Laura Smith
0 Comments
The first of the essential services convoys to Milford Sound was cause for celebration as it passed through the flood damaged highway on Saturday.

The relief of Milford Sound companies’ employees was obvious.

The lack of access to the world heritage site had caused business to drop; tourists and supplies were limited by the restrictions of air travel.

Discover Milford Sound cafe and information centre manager Tandra Lawrence said while tourists had been able to choose fly-cruise-fly options, the lack of visitors via road had meant customers were few.

However, she said the cafe was acting as a "hub" for the community. 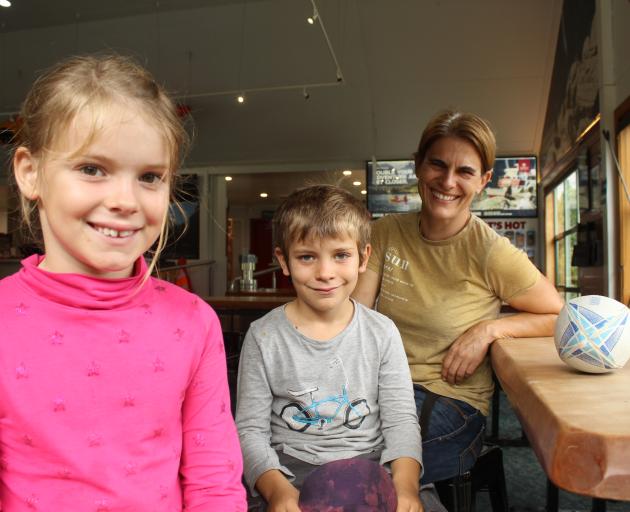 The Wilsons are lucky travellers — having their own boat means they can sail in and out of Milford as they please. Annika (8, left), Oliver (7), and Silke Wilson are taking advantage of being among the few tourists in Milford. PHOTO: LAURA SMITH
"They are still able to come in for a coffee, grab a pizza. Just getting supplies in today mainly on our end for the community."

She was optimistic about having the road reopened soon to tourist buses.

"Having it open just for a bit of normality for the team is nice, seeing some vehicles coming in. To be fair, we’re used to isolation so it is what it is and you’ve just got to roll with the punches."

Outside the cafe, the usually highly coveted parking spaces were empty.

Even flight options were limited at the weekend as ex-cyclone Uesi made its way towards Fiordland.

The few tourists who had managed to land had kept their visits short as pilots were anxious to stay ahead of the bad weather.

Real Journeys area manager Jason Steele said it had seen a "massive downturn" since the road had shut.

"The other problem is getting our food in, laundry and just general supplies. But we were fortunate enough that majors stores arrived just before the road closed."

He said the road was pivotal to Milford Sound and there had been "only two fly days in the past week".

Across the area, operators had carried only 450 people on cruises on the first of the two fly days, compared with the usual 5500 at this time of year.

Mr Steele said it would be great when the road reopened to the public.

"I can’t wait to see some different faces other than staff. We welcome it, I want to show off our backyard and all that good stuff."

Preparations had been made for the storm, and sandbags were piled up ready if necessary, but he did not expect it to be too bad.

Silke Wilson had sailed down to Milford Sound from Nelson with her two children and husband; she felt lucky to have the place practically to themselves and was ready for any bad weather.

"We were surprised by the lack of tourists. For us, it was amazing because we could go with our own boat to the waterfall."

She said they would wait for any bad weather to pass before heading on again.

The convoy consisted of about 15 vehicles going in but doubled on the way out as people took advantage of the temporary road access.