By Hamish MacLean
0 Comments
Flood damage has exposed archaeological remains and thieves have apparently pilfered moa bones from the Awamoa foreshore, near Oamaru.

The heavy rain on July 21 and a tidal surge exposed material along the coast of the Awamoa Foreshore Reserve, south of Cape Wanbrow. The roughly 650-year-old site was first excavated in 1852 and was "one of the most important sites" in New Zealand’s history of archaeology, Heritage New Zealand regional archaeologist Otago-Southland Dr Matthew Schmidt said.

It was difficult to tell what had been removed from the site, but under the 2014 Heritage New Zealand Pouhere Taonga Act a criminal prosecution could result in a fine of up to $60,000.

There were many sites along the coast where beachcombers might stumble upon an old moa bone and take it, but "the difference with this one is that someone is deliberately going there and trying to grab stuff".

"And the fact that they’re fossicking shows they know the value of the site." 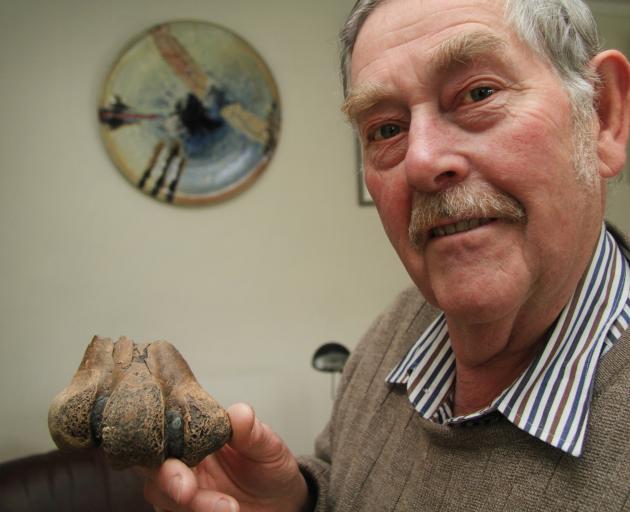 David Harrowfield, of Oamaru, holds a moa leg bone, believed to be about 650 years old, which he took from the beach at Awamoa Foreshore Reserve this week. Photo: Hamish MacLean.

A garden fork had been used on two separate occasions at the site where  artefacts, or taonga, had been left exposed after the storm.

Marks  left by the the tool the fossicker had used showed the site had been disturbed by the same person or persons, he said.

Under the guidance of Shar Briden, of Absolute Archaeology Ltd, Waitaki District Council parks officer Jane Matchett  and a "volunteer scientist" cleared the majority of the  objects  exposed by the storm.

Dr David Harrowfield, of Oamaru, said because the items  were exposed, there was  fear another storm could wash the bones, flake stone artefacts and oven stones out to sea.

The material he collected and cleaned in August would be transferred to the North Otago Museum, in Oamaru, on Monday.

All artefacts were in the first instance the property of the Crown until ownership was determined by the Maori Land Court, a report to the council tabled this week stated when it approved $10,000 to fund the work.

New  signs installed by the council this month could deter fossicking at the site, but it was "very, very hard" to catch people, Dr Schmidt said.

In June 2014, the Otago Daily Times reported a person or persons had dug pits at the site looking for bones.