By Daniel Birchfield
0 Comments
A grass fire threatened a hazelnut orchard at Maheno, south of Oamaru, yesterday, the second such blaze in North Otago within two days.

Fortunately, firefighters and some quick thinking from people at a nearby property promptly eliminated the threat.

A roughly 40m stretch of grass either side of the road was scorched by flames, which came within metres of igniting a row of trees next to the orchard.

About a dozen firefighters fought the fire with water, foam and hand tools. 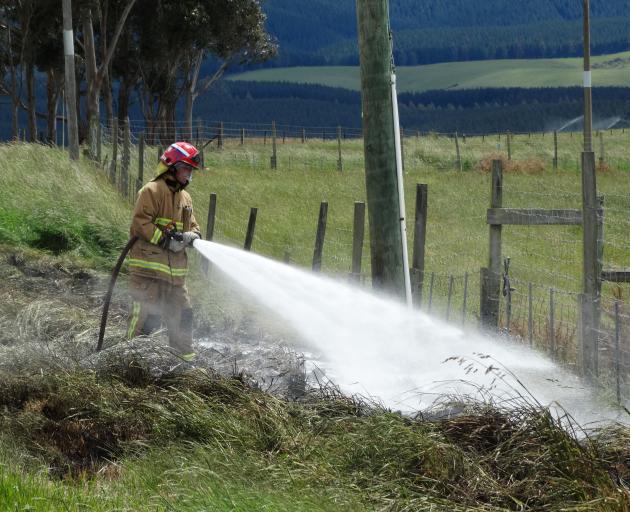 A firefighter tackles a grass fire in Island Stream Rd at Maheno yesterday. PHOTO: DANIEL BIRCHFIELD
The cause was not known but it was initially suspected the grass might have been set ablaze by a faulty power pole nearby, which a Network Waitaki engineer at the scene said was not the case.

Kakanui Volunteer Fire Brigade deputy controller Tim Bell said the blaze was fanned by strong winds and if not for the efforts of nearby residents before fire crews arrived, could easily have spread further.

People needed to ensure all fires were fully extinguished, given the recent weather conditions in North Otago, he said.

"With the high winds we have had lately it would be a good idea for people to check fires they have been burning recently that they think are out, are, because the winds are pretty good at the moment."

On Wednesday, thick smoke blanketed a section of Beach Rd in Oamaru after a burn-off, which was also spread by strong winds, spread to a grass bank.