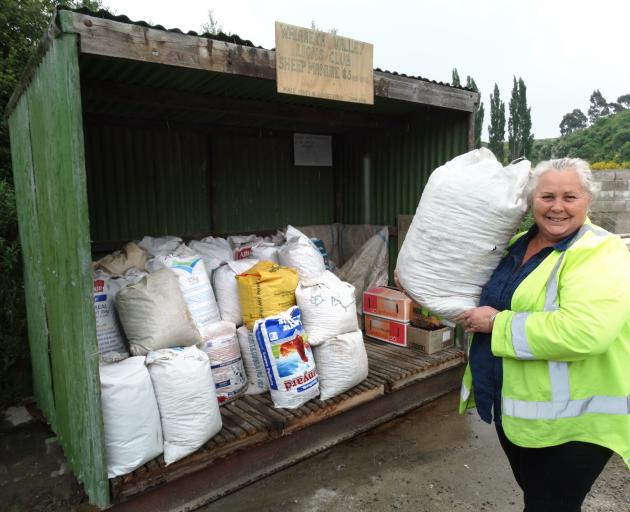 Waitaki Resource Recovery Trust business manager Trish Hurley alongside the Waiareka Valley Lions Club manure stall, which has moved to the Waitaki Resource Recovery Park, in Chelmer St, after repeated manure thefts. Photo: Daniel Birchfield
Ongoing thefts from compost and manure stalls in Oamaru continue to cause a big stink in North Otago, so much so that one has moved to a more secure location, and others are to follow suit.

Last month, the Otago Daily Times reported 40 to 50 bags of manure were stolen from the Waiareka Valley Lions Club fundraising stall at the intersection of Saleyards and Weston Rds near Oamaru, shortly after Squadron 26 (Oamaru) Air Training Corps commander Derek Beveridge told the ODT the organisation was losing about 25 bags of compost from its Humber St stall a week to theft.

As a result, the Lions club had moved its stall to the Waitaki Resource Recovery Park in Chelmer St, and the Air Training Corps planned to base an additional stall there.

The Oamaru Lions Club also planned to base its lime sales stall there.

"At the site where it used to be, it was open 24 hours and people could go there anytime, particularly overnight when manure was getting stolen. Here, we have locked gates so it's a lot more secure and during the day there are a lot of people about."

The trust did not benefit financially from the arrangement, she said.

John Thomson, of the Waiareka Valley Lions Club, said that a small amount of manure and sawdust would continue to be available from the stall near Oamaru, so people could buy it when the recovery
park was closed.

Mr Beveridge said a second stall was being built for the Air Training Corps, which was still battling the issue of theft, as up to 25% of 100 bags, on average, placed in its Humber St stall each week were being stolen.

He expected thefts to decrease once "probably two" security cameras were installed.