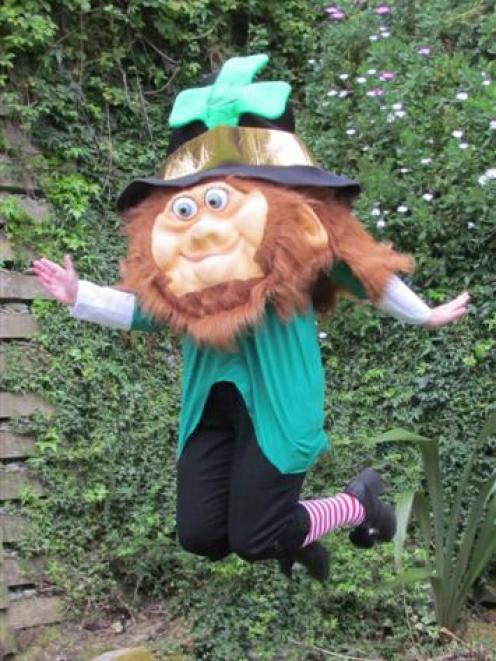 Oamaru woman Cathy Lawrence jumps for joy ahead of Ireland's crucial Rugby World Cup clash in Dunedin tomorrow. Photo by Ben Guild.
Cathy Lawrence's Irish eyes are smiling - if you can get a look at them.

Lately, they have been well hidden, and their perception coloured.

This week she was seeing the world not through rose-tinted spectacles but through a veil of emerald-coloured mesh, sewn into a large novelty hat.

From there, somewhere above her new, rubbery face and moulting beard, came the assertion that everybody wanted to be more like her.

"Everybody wants to be Irish at the moment," she chirped from inside her imported leprechaun costume in an accent virtually untouched since she left Belfast, and The Troubles, 40 years ago.

That result broke the tournament wide open, setting up a likely quarterfinal match between Australia and South Africa and potentially earning Ireland a preferable passage through the northern hemisphere teams in the knockout stages.

Since that happy upset she has received offers of free drinks from All Blacks fans keen to see Quade Cooper and the Wallabies in a sudden-death clash against the imposing Springboks.

"Who knew?" she posed, considering who actually had known Ireland would triumph, before answering: "I did".

Relations between New Zealand and Ireland are not uniformly complimentary, though.

Cathy's mother "still goes on" about Tana Umaga and Kevin Mealamu's spear-tackle on Brian O'Driscoll during the first test match of the British and Irish Lions tour in 2005, and light-hearted ribbing can now be heard in her Oamaru home regarding proposed loyalties should a dream final between Ireland and the All Blacks eventuate.

"I asked them who they were going to bark for," she said.

"There was a big silence, and I said: Good answer."

She will travel to Ireland's pivotal Group C clash with Italy in Dunedin on Sunday in a group including her husband Paddy, son Conor (17), and nine others whom she said were mainly "Irish wannabes".