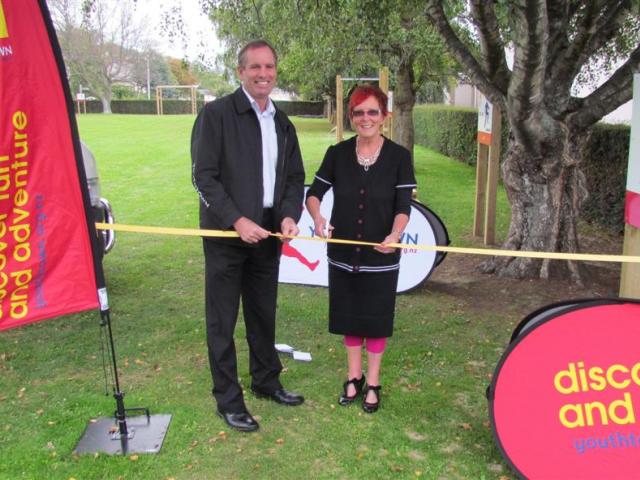 Fitness trails were launched at two Oamaru schools this week as part of a national initiative designed to encourage children to become more active.
Police are urging the public to be careful with their bank account details after Oamaru residences were targeted by international mail fraud.

Young and old alike clustered around trophies galore yesterday as the Great Rugby Road Trip stopped off at Takaro Park in Oamaru.

The sight of a senior sergeant attempting to gain access to vehicles in a busy car park piqued the interest of shoppers in Oamaru yesterday.
Police have found more than $10,000 worth of items allegedly stolen from an Oamaru auction on Tuesday night.

Waitaki district councillors want a detailed engineering evaluation from at least two structural engineers on how well council headquarters would perform in a moderate earthquake.
A new governing board is being set up to improve facilities at Centennial Park, involving the Waitaki District Council and the sports that use the ground.

Oamaru's tourism industry appears to be heading in the right direction, as the town graces the cover of a national quarterly magazine read by almost a million people.

The Great Rugby Road Trip will roll into Oamaru tomorrow with a cache of silverware.

Katrina Hewett is on the verge of becoming a double Olympian.

Nearly 30 courses will be on offer at Transition Oamaru and Waitaki District's third sustainable skills school, to be held throughout the district from April 14-24.

A "stunning" quilt inspired by a World War 1 poem is to be auctioned for charity.
Fitness trails will be officially opened at both Waitaki Boys' and Girls' High Schools on March 30 as part of a national initiative to get children to engage in physical activity.

Police are appealing for information regarding three youths in school uniform seen in the vicinity of a fire which tore through a shed in Caledonian Rd yesterday.

The earthquake risk of North Otago's unreinforced masonry heritage Oamaru stone buildings was the focus of a seminar yesterday with legal, insurance, engineering and seismic experts.

The first group to complete the Alps 2 Ocean Cycle Trail are enthusiastic about its quality.

More than 100 Waitaki Boys' High School (WBHS) pupils ran more than 1000km in 20 hours during the weekend to raise funds for an Oamaru girl needing an operation.
North Otago Cricket's greatest prize, the Borton Cup, remains lost, and is likely to be replaced by a shield.