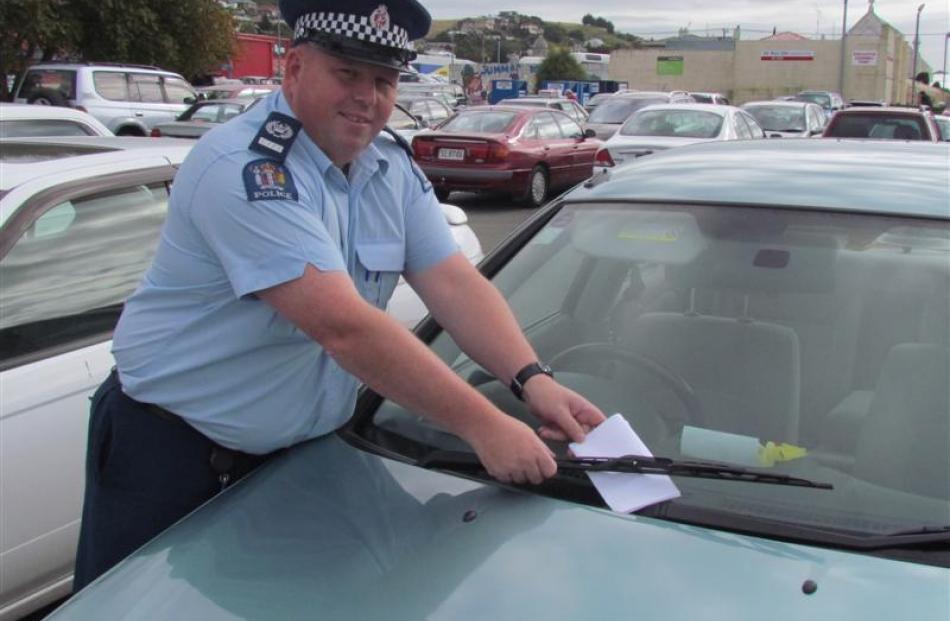 Senior Sergeant Jason McCoy, of Oamaru, warns another motorist about the need to lock cars. Photo by Ben Guild.

The sight of a senior sergeant attempting to gain access to vehicles in a busy car park piqued the interest of shoppers in Oamaru yesterday.

Senior Sergeant Jason McCoy, of Oamaru, tried door handles and peered through the windows of cars parked in the Countdown and Warehouse car parks for nearly an hour, before reporting a long list of valuables he could have taken.

A laptop, a video player, a duvet, smartphones, binoculars, sunglasses, handbags, garage door openers, cash, coin purses, cans of petrol and GPS devices were all among the potential haul, left in clear sight in empty vehicles.

Six cars out of about 150 checked were found to be unlocked, including one which had the keys clearly visible.

The car, which sported a fire service badge on its windscreen, was then locked and an additional note was left on a warning letter stating the keys could be retrieved from the police station.

Senior Sergeant Jason McCoy, of Oamaru, said the initiative was part of the police strategy for prevention first, which was designed to stop crime before it had an opportunity to happen.

The number of thefts of, and from, vehicles had increased markedly in the past 18 months.

With the right tool, smashing a window and grabbing readily available items could take as little as 10 seconds, while seasoned car thieves could use a bent fork to start a car in less than a minute, Snr Sgt McCoy said.

The initiative had produced mixed results.

"I thought it would be a lot worse than it was, but it's still disappointing that these opportunities are still there, especially after the message we have been trying to put out," he said.

"We've been harping on about it ... hopefully this will be a kick-start for people to make sure their vehicles are secure."

There was a common misconception among locals that small towns were immune from such offences, he said.

"In general conversation with people I know, they say, 'That wouldn't happen in Oamaru,' but unfortunately, it does." Police often received calls about cars being broken into in broad daylight, and offenders were generally opportunists who were often transient in nature.

"There are more and more savvy criminals coming into town," he said.

As such, drivers should be diligent in ensuring no valuables could be spotted from outside their vehicles.