Quilt to be auctioned as fundraiser for RSA 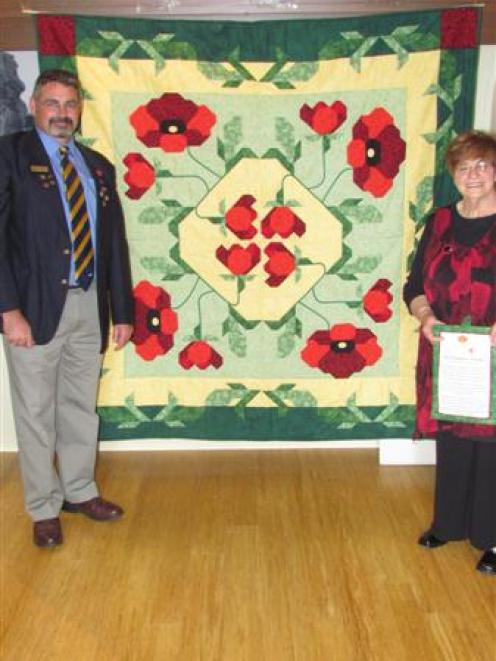 Upper Waitaki RSA president Michael Blackstock and Nick Dempster with Mrs Dempster's handiwork at the North Otago Museum yesterday. Photo by Ben Guild.
A "stunning" quilt inspired by a World War 1 poem is to be auctioned for charity.

The Waikouaiti woman, who attends the Puketapu patchwork group at Palmerston once a fortnight, spent eight months completing the work, which includes about 100 tiny stamen for each poppy.

She was taken aback on first seeing the design.

"As soon as I saw the picture I said, 'Take a look at this'. It's such a stunning piece," she said.

"The first thing I made was a bud because I wanted to see the red and black coming through. I made it up and showed it to everyone."

The pattern and materials, which originate from Canada, where they were released four years ago to commemorate Remembrance Day, took two years to reach New Zealand shores.

Trish Blackstock, of Invermere, Canada - the sister of Upper Waitaki RSA president Michael Blackstock - acquired the pattern after seeing a friend's finished version of the quilt. She intended to bring it back to New Zealand, but found the materials would not fit into her luggage.

Two years passed before the opportunity came again, but when it did, and the materials and pattern arrived, a new difficulty arose - finding someone capable of producing it.

The Palmerston group, which made a quilt for every bed at the Dunedin Community Hospice and another for every child admitted to the Ronald McDonald house in Christchurch, were consulted, but members believed it to be too difficult a task.

Mrs Dempster did not.

Upper Waitaki RSA president Michael Blackstock, whose father Ron arrived with the air training command in England at the age of 18 years and 10 days, June 8, 1944 - two days after D-Day - said the quilt was a welcome boost for the RSA in what is a tough fundraising environment.

Half of the funds raised through the online auction, which will have a reserve of $2000, will go towards the Upper Waitaki RSA support group, while the rest will go towards Mrs Dempster's charities.

Mr Blackstock wished to thank the North Otago Museum for showcasing the quilt until its auction in late-April.