Plenty of praise for cycle trail 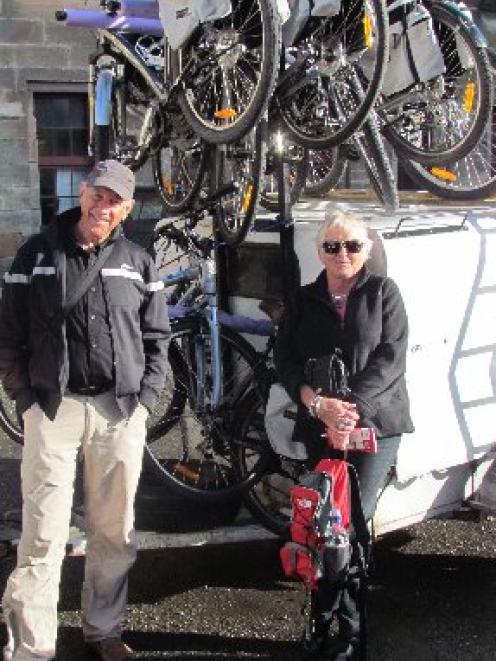 The eight-strong group from the Auckland area, with an average age of 65, rode for seven days, descending 780m over the 312km trail from Mt Cook to Oamaru harbour.

They were the first group to start the trail from the very top, with a helicopter flight across the Tasman River.

John Parker was full of praise for a trail he described as superior to the Otago Central Rail Trail he completed three years ago.

"I got five times the sense of satisfaction from completing this trail," he said in Oamaru yesterday morning.

"It's a tremendous experience for townies; the scenery at times was absolutely divine.

"We were saying at the time, there may be equal scenery in the world but there can't be better."

People older than 50 with discretionary income looking for "safe adventure" would be most likely to take the trail, he said.

The complete ride would not be for everyone, with "reasonable levels of fitness and bike skills" required to complete it, he said.

Fellow cyclist Lucy Casey agreed the trail beat the rail trail "hands down", and said the group had taken more than 2000 photos during the week of "snapshot cycling".

Great weather, the first glimpse of Mt Cook and the isolated sections around Lakes Benmore and Aviemore were considered the highlights of the trip.

Minor issues which needed to be improved included sections of track where the gravel was too thick, and remote spots along the route where toilet facilities were scarce.

A more accurate reflection on online maps on which parts of the trail were finished would also be useful, the pair said.

Geoff Omnet, of Alps 2 Ocean Cycles, who hires touring bikes, trailers and vans, was excited years of planning had delivered the trail's first customers to Oamaru.

"This is exactly what it was set up for - getting people to stay in Oamaru and then explore the Waitaki Valley," he said.