Safety of buildings discussed at seminar 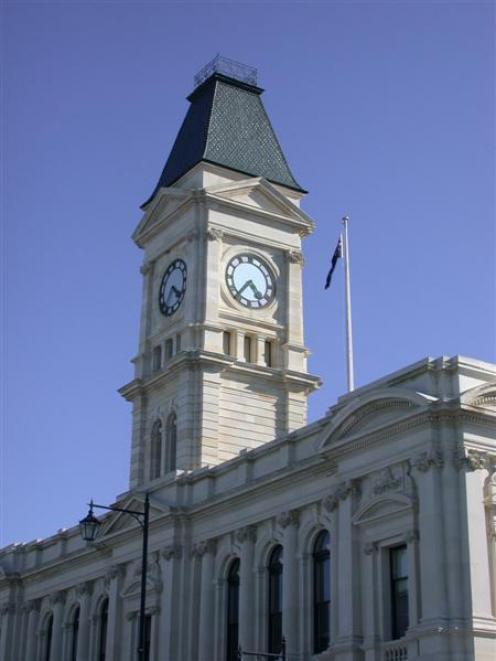 The Waitaki District Council's headquarters in Oamaru. The council will next week discuss what should be done about the part of the building which faces Meek St. Photo by David Bruce.
The earthquake risk of North Otago's unreinforced masonry heritage Oamaru stone buildings was the focus of a seminar yesterday with legal, insurance, engineering and seismic experts.

Also chief among the concerns were the possible outcomes of the Royal Commission inquiry into the Christchurch earthquakes and the effects that future changes in Government policy could have on building owners.

Before he introduced the speakers to about 100 people, Waitaki District Council chief executive Michael Ross said the council had decided to postpone a complete review of the district's policy until after the Government had responded to recommendations made by the Royal Commission.

He also said the council would discuss next week what should be done about the part of the council headquarters facing Meek St which does not meet 33% of the building code.

Council policy manager Fraser Liggett said legislation took a reactive approach, as the council was able to approach the owner of a problematic building only during the consent process, or if a complaint was made by a member of the public.

At present, the owner of a commercial building of more than one storey which meets 33% of the building code is not required to take any action; buildings which reach 25%-32% of the code are given 25 years to come up to code; buildings reaching 20-24% are allowed 20 years and those which fail to reach 20% are given 15 years.

Lou Robinson, of civil and structural engineering consultants Hadley Robinson, said Oamaru stone buildings generally consisted of blocks up to 500mm-600mm thick which were far stronger than buildings made of schist in Central Otago.

Based on international opinion sourced by the Government, buildings which reached 33% of the code would likely not need strengthening, but those that did not could be forced into extensive work, he said.

Michael Garbett of law firm Anderson Lloyd warned of the possibility of "risk-adverse decision-making" on a national level, and suggested building owners begin by reinforcing verandas and parapets.

Alan Race, of insurance brokers Crombie Lockwood, said only a handful of insurance companies were now willing to offer natural disaster insurance, meaning that not enough cover would be available to insure every building.

Insurance companies were indicating they would exit the Christchurch market if it was rocked by another major earthquake, which could lead to a situation similar to that of California, where financial agreements with money lenders had replaced traditional insurance options, he said.

Otago Regional Council natural hazards manager Michael Goldsmith said little was known about the series of faults between the Shag Valley and Kakanui Range, which made up the Waihemo fault line capable of delivering a 7.1 magnitude earthquake.

In that event, liquefaction would be most likely to occur in the lower Waitaki plain and Kakanui catchment, he said.